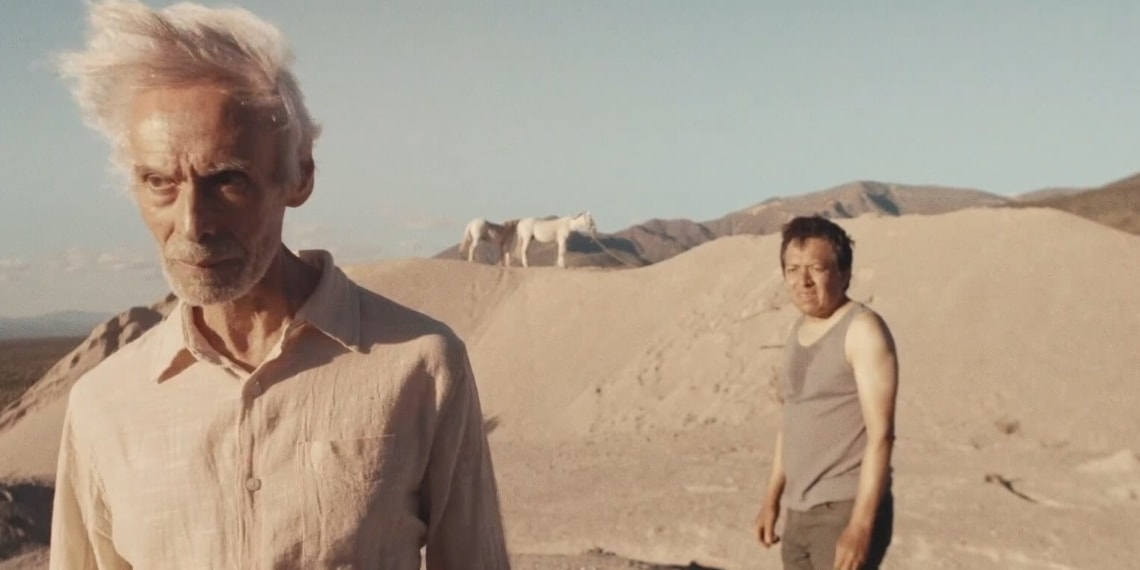 Writers Jun Tang and Ziyi Jin follow a nuanced story, of a sexagenarian and his lover, a forbidden love that can’t find its safe haven in an unforgiving world. When juxtaposed with the raw scenery of a Mexican hamlet, what White Horses, Silver Mine becomes is a meditative piece; poetic and lingering in its effect.

Juan is a mine owner. His weather-beaten face has seen many summers. A man of few words, hardened by fate, Juan — played by Juan de la Loza — is the 60-something homosexual whose backstory we don’t know about, making it even harder to relate to an already phlegmatic character. It’s in the restraint Loza exercises that his performance shines through. When his agitated workers begin to protest against the  unyielding mine, hunger, poverty and civil disorders descend. Amongst them is Sebastian, singled out.

What director Ziyi Jin does is essentially a somersault to the conventional representation. Mexican people are famed for their very expressive conduct. Loud in life, celebratory in death. White Horses, Silver Mine, is quite simply put, the opposite. Subdued in life, deathly calm in picturisation. Even the music (composition by Cali Wang, guitar performed by Peter Lam) is so pointedly used at intermediate moments that it becomes a welcome relief — relief to breathe, relief to despair, relief to mourn the loss of love, hope and life.

Sebastian and Juan’s love is repressed, for it is born in the bosom of a traditional and conservative society. Their intimate moments are neither shown, nor spoken about, but simply felt in Vincente Ferri’s muted breakdown as Sebastian. His back turned to the camera, we see the grieving man, his love unfinished. To counter it is Juan, whose almost archaic hold over himself finds no release. To balance the characters, comes into the play the most well-written part — that of Alex, Juan’s son. Little Brayan Jaramillo Martínez, who plays Alex, is the voice of the film, and perhaps the only voice.

In the boy, we see what is painfully lacking in the adults — the freedom to express their love, hurt and anger. Alex, who shares a particularly warm relationship with Sebastian, senses it all and is yet clueless of what the dynamics are between the adults, but is nevertheless torn by its consequence. Yiqing Yu, whose editing made Under The Flag temporal, brings disquiet to the 14:48 minutes of White Horses, Silver Mine. That, along with the brilliantly enabled cinematography of Xun He, gives the audience languid shots of the unforgiving Mexican landscape; a beautiful choice considering how parallel the story runs to this setting.

It’s in Jin’s delicate approach to the story that the film’s success lies. In leaving it to the audience to feel the restrictions and unfulfillment of a treasured love, the men become both, the prisoners of their own choices and victims to their circumstances, and as Alex, we too are simply left despairing.

The tastefully chosen metaphors of white horses and silver mine resonate with the characters and their story. Martínez, who as Alex, is simply brilliant, offers the narrative its closure, just as he opens it, even as we are left seeking for one.

White Horses, Silver Mine is soulful and bare and in the gentle exploration of homosexuality, traditions and class divide against a beautifully told love story, what Jin has offered is a poignant short.