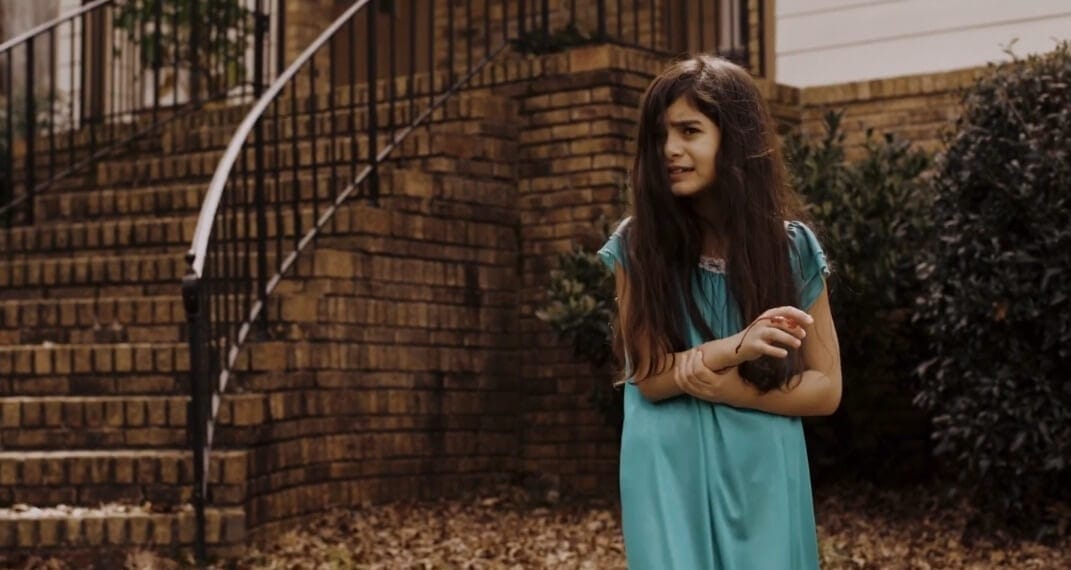 Pamela Perrine’s The Journeyman (11:28 minutes) is a layered social drama that brings forward the discussions on mental health, societal rehabilitation and childhood traumas in a tight, dual narrative. But, if you thought the film can be compartmentalised into one of the numerous stories dealing with mental health, you couldn’t be more wrong. At the heart of it, The Journeyman is about love, compassion and perhaps even a silent message sent out to all those whose voices are never heard.

The film opens to a young Hatteras whose little hands carefully balance the doll in one hand as she brings coffee for her mother. Noor Anna Maher, who plays the child, has enough screen time, with Andrew Burn’s camera following her halting footsteps. Writer-director Pamela Perrine spends copious amounts of time on the childhood, a directorial choice that pays off exceedingly well in the second half. In little Hatteras’s world is her mother Agnes (Lydia Chandler) and her present paramour Everett (Jay Mohr). The scenes between the trio are ingeniously written implying at a distant mother and abusive partner, but not explicitly shown. The beauty of The Journeyman lies precisely in this, in its ability to have narrated a tale leaving enough clues for the audience to understand the bigger picture. Editing deliberately keeps the pace slow here, a conscious choice, in order to connect with little Hatteras. And, Mohr, whose decisive moves determine the course of the film, is terrifyingly good as Everett,  as is Chandler — not surprising then, as the scene closes, it’s the diabolical laughter and gaping wound that is left for the audience.

Perrine, who plays the grown-up Hatteras, owns the scenes. Despite her entry limited to the second-half, her portrayal of a traumatised, struggling to heal individual is expounded in every line of dialogue she delivers.  Dealing with her unresolved childhood trauma, and a mother who was distant, today Hatteras is a mother herself and undergoing counselling, only so that she can reunite with her teenage son, while battling suicidal thoughts herself. In Dr. Middlebrooks’ (Anthony Reynolds) clinic, the doctor and patient converse, provoke, incite and it is reminiscent of the many similar scenes portrayed and yet it jabs at your heart when you see Hatteras cover her slit wrist with her sleeve.

If the film could be condensed to a particular scene then it would have to be this, between Perrine and Reynolds. As the counselling session progresses, we understand the weight of the film’s title, the aftermath of a childhood robbed, and Perrine nails it. As she goes about the entire session from despair to resignation, acting on point, it would take a stone-hearted person to not be affected. The point where she breaks down, almost pleading to be reunited with her son, and her failed attempts at even hiding the vestiges of her suicide attempts are, simply put, painful.

There is a distinct shift in the cinematography; the transformative years from childhood to adult years are highlighted in Burn’s angling of his shots. Music is almost absent, adding to the vacant feeling the film carries with it. As a resigned, but strangely determined Hatteras makes the final move, the camera pans to give an aerial shot and we see the tiny speck of woman and her seemingly endless problems, and we suddenly realise that they aren’t hers alone, but universal, and hence, ours too.