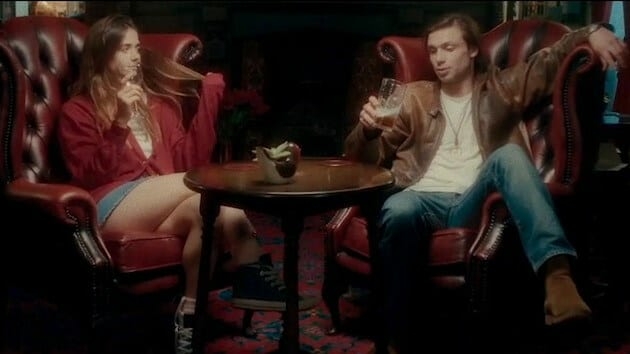 Thomas Wheeler’s The Wine Thief is many things at once. A heist film, set in Bridgnorth, Shropshire dealing with a charming thief and his escapades. A love story set against the backdrop of the idyllic English countryside. And, a revisit to the nostalgic times of the early 2000s. But, underneath it, it’s a social drama that explores the British class divide that is entrenched in the fabric of the society. A 19:56-minute short that runs along the lines of several films from its genre, but apart in terms of its setting and visual theme.

Jack charms Thea; their meet-cute and quick romance is recounted as Thea remembers it for the interrogating detective (Jack Waldouck) at the High Wycombe police station. Right from its opening frame, what Wheeler gets right are the visual depictions of the film’s setting. Be it the costumes, props, the hairstyles, everything is a textbook reproduction of the 2000s. As Thea and the detective go back and forth, covering the heist, Thea recalls each moment spent with Jack. And it’s through this back and forth retelling that we are introduced to every other character in the film.

Barnaby Chambers is Jack, a smooth-talker, whose gift of the gab can seem jarring to some, and outright unacceptable to others, depending on which side of the British ranking class you are looking at. It’s interesting to note here how writer-director Wheeler thought of incorporating such subtexts without making it seem like the most striking context. But it’s there, smartly inserted in the dialogues and setting. If Thea remains unaware of it like most of us in the audience, then in one telling scene, which also becomes the setting for the undoing of Jack and his companions, it’s made crystal clear.

Fred and Leo Lawton’s music is almost not taken note of. It fits so effortlessly with the narrative in resurrecting the yesteryears that one doesn’t feel its presence until the scenes are filled with silences. However, it’s the cinematographer (Billy Kendall), and Wheeler, who also happens to be the editor of the film that make The Wine Thief remarkable. The scenes are visually appealing because of the rich grainy texture and hues of red that highlight events of the narrative and for a film that goes back and forth multiple times in its narration, editing with any less finesse would have simply sabotaged the project.

Alina Allison who plays Thea is classic. She wears the social rank like an invisible armour. Her dungarees, a gift from Jack, are a mere extension of her assumptive personality. Daughter of a wealthy, prominent MP, Thea is a character far too often explored on-screen, but Allison brings a soft freshness to the portrayal of her. She isn’t a trope, nor is she simply an accomplice to a parallel story, but a driving force to the narrative instead. The grand heist in question isn’t ingenious or clever even, neither in thought nor execution, but it’s the very purpose and underlying causes of it that makes it so interesting. Add to that the perfected costume and set design, the film is a time-travel and ode of sorts to films of its category.

The Wine Thief forms an interesting watch for those fond of the crime fiction genre, and a bonus if you find yourself an aficionado of the British brand of wit and humour. For the rest, its cutting heroine and deft editing, should be all the persuasion you need!