by Nimisha Menon
in Interviews
1 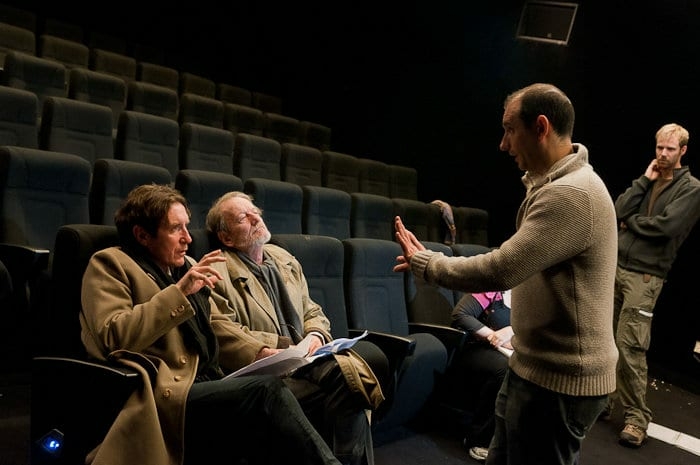 A Little Place Off Edgware Road does justice to its inspiration – the short story by Graham Greene. Short of giving it a sepia-tone, the film almost instantly takes one back into the all-consuming world of its protagonist. Writer-director Tim Hewitt tells us what it costs to revisit a classic, the boon of having crowdfunding and what it means to have the best of cast work with a singular aim.

Well, it goes way back to when I was at school and 13 years old. In an English class, my teacher read the whole short story, which is about 4 pages if I remember correctly, to us. Why he read it to us and didn’t tell us to read it ourselves I can’t remember. But I vividly remember thinking that if I were ever to make a short film, I would base it on that story because it stuck with me for some reason.

I suppose I would say the essence of the original. Otherwise, why would you make that particular story? I equate that a little to when a producer reads a script of yours and says ‘i love it, I think it’s amazing, I’ve always wanted to do something like this. Just, could we change the story to this and the characters to that?’ So you don’t REALLY like this, more what it could become or changed into. In which case, write something more fitting to what you’re looking for… Now, with ALPOTER, the thing that was at the forefront of my mind when writing it was the short story. When adaptations work, you can at least see the fingerprints of the author on it, or at least you should. Maybe the main exception to that is the film of the Shining. I think most would say ‘that’s Kubrick, not King’.

Sometimes you need to check yourself. You need to say ‘stop, that’s too far from Greene’. I didn’t find it difficult or easy, to be honest, I simply said to myself this is the short story. We’re going with that. What intrigued me was why is this character mad, or at least why does he think he’s mad. The great thing about a short story that is that short and that well written is you don’t really need explanation, but I thought to turn it into a visual medium it would be interesting to delve into the character’s past. Maybe if I made it now, though, I could just do it as Greene wrote it!

Downright frustrating. This is purely my experience, since I’ve known others who have been relatively successful with it, and I’ve tried it I think four times now but I’ve failed every single time. Having spoken to many others, I think the key to successful crowdfunding is either 1) having all the backers ready before you start, which means you already know most of the people who will give you money or 2) it’s just very close friends and family. But as I say that’s only my experience. With ALPOTER we didn’t reach anywhere near what we set out to. I never have with any project. One project I am still trying to make I spent 10 months planning the campaign, had a fantastic graphic designer friend who owns a company called Smoothfluid (he did ALPOTER’s poster) who did all the merchandise, poster and social media design (we developed a good size social media following too), a great Concept Designer who did the Marvel films and Star Wars and the latest Bond to the point where the campaign looked stunning. We were trying to raise £14,000 and raised £500. But some people are successful, I mean all you have to do is look at some projects on those websites and they sky-rocket. Unfortunately, I do not know the secret yet. I suppose I would say ‘try it’!

Ooh, I don’t think there really was anything. I mean, nothing ever happened where someone said something and I said ‘absolutely not’. Suggestions were made – our great director of photography is the one who convinced me to shoot in 16mm film as opposed to digital. Now, that financially put a huge strain on me but I’m glad we did because I think it suits the look of the film and its style, but also it was an incredible discipline as a director. Shooting digital seems very easy in comparison! Now, film is a team effort. One of the most glorious things about making a film is the fact that you’re a team. If ever, and I mean ever, anyone from the grip to the runner to the leading actor asks ‘can I make a suggestion?’, the answer will (and should) always be ‘please’. Why wouldn’t you want to listen? I’ve only made three short films, and I think I picked that up from the beginning.

Very. I wonder if writing is the worst when it comes to that because you’re inventing everything from the blank page. Yes, it’s very difficult. When I’m watching a film or a TV series or something, even if I’m loving it, I will realise I’ve been day-dreaming about how to fix a particular plot issue (usually because I’m reminded of it by the thing I’m watching) or a structural thing and then I have to rewind because I don’t know what’s going on. But the worst is in bed. Either trying to get to sleep or, in extreme cases, waking up in the middle of the night and suddenly you’re thinking about your protagonist’s dialogue or how to work a flashback.

Well if by ‘moved on to feature-lengths’ you mean writing them then yes. Still yet to make one. But the last short film I shot, wrapping a week before our UK lockdown started which was lucky, I did in order to get interest in the feature film which I had actually written first. But challenges in terms of the writing is just becoming satisfied with it. Nailing structure, character, theme I suppose. In a bizarre way, writing shorts is more challenging because you’ve got to do everything you do in a feature but in a very short space of time.  I’ve written a few features now, one managed to get to the quarterfinals of the Academy Nichols Fellowship which is the screenwriting competition run by the Academy of Motion Pictures Arts and Sciences, or Oscars to most people, which built some confidence. But actually getting a feature made… that’s a bit of a lottery, which I’m still playing.

Wow. To adapt? Well, I actually said that I think I would spend the rest of my writing life just writing original stuff because then you don’t have to worry about rights, pleasing fans etc (not that ALPOTER had any of those sorts of problems I hope) and it’s a great feeling to think that it all came from you, but if I HAD to choose… that’s really difficult. One of my favourite authors is Ian McEwan but his novels should stay as novels. I love John Irving.

Firstly, everyone collaborating and putting in the effort as if they were being paid their standard wage whereas of course, everyone did it for just food. Also, the very first shot and calling action to Paul McGann, who did exactly what I’d just asked him to do. I did have to pinch myself I’ll be honest – he’s in one of my favourite films of all time, Withnail and I, which I grew up with – all my school friends will confirm we used to watch it probably every weekend, without fail. So that was pretty special. Then Ronald Pickup turns up, who has had a pretty great career let’s be honest, and switching it on in an instant. I had acted with Owen Brenman before (he’s done a heck of a lot too) and we’re friends now, and I remember thinking the scenes he did with Paul were just amazing to watch.

I’m not quite like Woody Allen in the sense of ‘I never ever want to set eyes on my work again once it’s done’, but I haven’t watched ALPOTER really at all since I finished it. I think it’s true that you watch it so often when you’re editing, then sound, then grading, then a few times before you screen it etc that you realise ‘right, I can’t change it now. It’s properly finished’. Which I suppose is the closure.

Tim Hewitt’s ALPOTER is a must-watch for those who are an aficionado of Greene’s works or wonder about adapting any of the classics into short films.