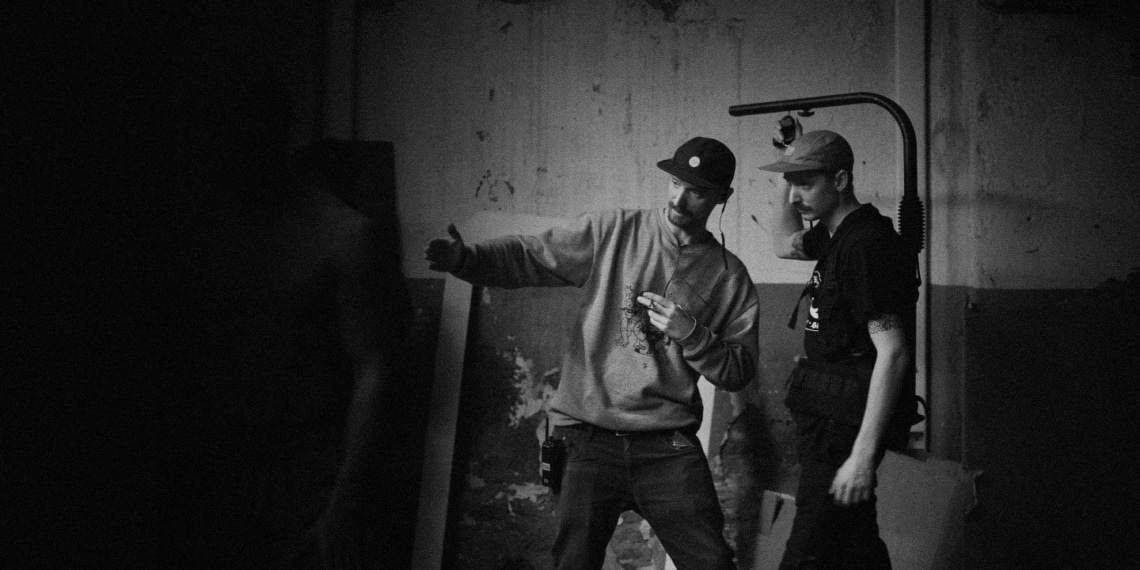 The Gasser Brothers’ Eclipse is personal; a project keenly undertaken for the message it sends out; the film is novel in its narration and experimental in its style. We have with us Marco and Fabio, the Gasser twins sharing their unique standpoint in filmmaking and what Eclipse meant to them!

Marco (M): It’s funny because we both never really planned to end up making films (and even less together). We moved with our parents from Zürich (CH) to Barcelona when we were about 10, and after graduating in high school I was really into letters, graffiti and all that stuff, so I started studying graphic design. A friend of ours (Xavi Trilla, the editor of Eclipse) had just bought a Canon 5D and needed a helping hand to shoot a music festival into a movie, so I eventually ended up being on stage filming artists like Steve Aoki or Busta Rhymes without even knowing how the camera really worked. But I enjoyed it a lot and so started digging deeper into the filmmaking world from there on, shooting and editing content for small businesses, friends, etc.

Fabio (F): My case is a bit different. I first studied to be a sound engineer, but then realized I wasn’t passionate enough about it to fully commit myself into it. It was an interesting subject and everything I’ve learned about sound still serves me today, but at the time it just didn’t fulfil me 100%. I then slowly started discovering my passion for films and ended up going to film school where I got a degree in the direction of photography. Later joining my brother to develop our crafts; we started working together, which just happened in a very natural way. Also, living in such a creative and inspiring city like Barcelona has definitely been a plus point for us in every sense of the word.

F: A lot actually. Our journey into filmmaking started when we began making branded content films with a strong documentary approach for a bicycle brand from Barcelona called “Dosnoventa”. We’ve made several trips with them shooting films in different cities and places around the globe, including California, London, Milan, and Seoul. We obviously always tried to prep those shoots as best as we could, but more often than not improvisation and adopting a run and gun shooting style was necessary in order to get enough footage covered. I believe this way of shooting has since then been burned into our DNA. We nowadays prep every shoot carefully to have our homework done before arriving on the set, but we still like to leave room for improvisation during the shoot. It’s often during those last improvised takes that we end up getting the best results.

M: I think working together with your twin brother is just a one-of-a-kind thing. There’s a certain telepathic connection between us that I believe is impossible to find in any other person we know, both inside and outside of work. And I dare to say that this connection is 90% positive vs. 10% negative 🙂 Don’t get me wrong with the negativeness: it’s a blessing as you say and we both have separate lives, different personalities and independent ways of thinking. But we have to deal with the fact that sometimes one of us can influence the other very easily when giving advice, making decisions, and so on… it’s just something that comes included within the “2-in-1” pack.

F: When approaching a new project we usually start working on the initial drafts separately in order to obtain a broader first generic vision on the piece. From that point on, all decisions are valued and taken together: we sit down and work on the core concepts and structure until we get to something that works well for both of us.

F: Besides films and music, I’m also interested in still photography, paintings and books. Sometimes a single image or sentence can evoke powerful emotions and become a great source of inspiration. I also tend to screenshot everything I find visually appealing and index it on a “reference” drive I keep, so I can get back to it when I’m looking for inspiration or references for a project. On the other hand, I also believe it’s important to sometimes try to maintain a certain distance from references and focus on the idea of a project itself. Too many references can sometimes become a distraction more than an inspiration; it’s very easy to get lost in them and end up losing track of what inspired you in the first place.

M: I’m the shower guy. I tend to get most inspired when taking a long shower and listening to music at a high volume. It just works great for me.

M: Definitely! An intense moment we witnessed on the set happened while we were shooting the fight scenes for our previous passion film Beloved Stranger. Besides our main character and his opponents, we managed to gather around 40 non-profesional extras to animate the fight. Unfortunately, it had logistically not been possible for us to rehearse with them before the shoot and we were a bit sceptic about it; if they would achieve the level of energy that we needed or not. But we any way just decided to go for the first take and see what happens…. once we called out for action, these guys went off LIKE FIRE!! It got so loud and intense and there was such a powerful energy in the air… you could truly feel the adrenaline rushing through the fighter’s bodies. The fights looked so powerful that we almost got afraid they could turn into real fights. It was great.

F: Those same invigorating emotions also came out while shooting the first dance scene of Eclipse with our actor/dancer Yao Dapre Nicol. Even though rehearsed, his sensitive and emotional dance movements felt much more magical once the camera went rolling… everybody on set was hypnotized.

F: We actually wanted to shoot the desert scene in Las Bardenas Reales. The rock formations in that desert look far more impressive than the ones in Monegros, but it’s also twice as far from Barcelona (4 hours one-way), which made it logistically impossible for us to consider because we had to schedule the whole desert shoot in one single day. So, we spent a lot of time google mapping Monegros to try to find a location that suited our needs until by pure coincidence we found the perfect spot thanks to some random guy who had posted a few 360º pics of a rave party.

That being said, we strongly believe that finding the right location for each scene of a film is crucial to ending up with the desired final result. It’s as important as finding good actors or a great crew to work with, you know? You can work with the best of actors or the best crew in the world, but if the location doesn’t fit the needs of the story then the scene will probably end up feeling out of place and chances are high that the audience will notice that and get distracted by it while watching the film.

M: To me, dealing with a passion project basically means that one will never get to be 100% satisfied with his film (laughs). There are so many things that can be added, removed or changed in a project… you could be modifying things forever and never get to finish it. Shall we shorten the film and change its internal rhythm? Maybe less stock footage? More use of long takes instead of fast cuts? We obviously had to deal with these kinds of doubts (and I believe a lot of directors do), but in the end, the final product is the result of what felt right to us in a certain moment in time, so we just enjoy what came out and try to let go of unnecessary doubts.

F: Introducing the VFX butterflies into the picture has definitely been the most challenging aspect in the making of this film. Mainly because we had never dealt with VFX before and had to learn a lot about the process. Also, shooting on 16mm (for the first time) didn’t quite help to make things easier, but both; the butterflies and the timeless quality of the film were important to us and we knew that it could somehow get done. The post-production team from Eighy4 studio who collaborated with us on this adventurous journey did an amazing job and we’re very pleased with how everything finally turned out.

F: In my opinion, filmmaking is, like art in general, a rich tool of communication and expression that has many different qualities to it. Every artist has the choice to use it for whatever purposes, and I don’t think one is necessarily better or of greater importance than another. My favourite films tend to be the ones that achieve to combine both entertainment and education together to leave the audience reflecting on what they’ve just witnessed once the movie is over. These are the films I aim to create.

M: I think good art has the power to transport an audience to a different reality, and that’s something I find very appealing and exciting about it. A good film is like a magical portal to a different world in which the viewer has the ability to escape real life and experience a different reality for a short period of time. And this is something that I like to keep in mind and try to base myself on when developing a project.

F: Passion films leave a mark on you and you somehow never really let go of them completely, given the amount of time, emotions and personal resources (risks) that you invest in them. But at the same time, we’re living in such a fast world in which time has become very relative and projects tend to have a very short life cycle… you just have to be aware of it and jump over to something new very quickly.

M: I think at some point you naturally start to feel the need of closing a chapter and moving on to something new. Otherwise, it can become counterproductive and self-defeating.

Right now we’re working on a small docu/commercial that should get shot by early September (if the COVID pandemic doesn’t strike back) and are simultaneously developing ideas for a new passion project that is in its initial stages. Besides that, we’re currently on the lookout trying to find a production company that would be interested in having us on board for commercial work or any other type of interesting projects. We definitely think this is the next important step for us to take in order to grow.

Marco and Fabio continue working on projects that resonate with them and as they work towards their next goal, we can only thank them for their time and wish them the very best for all of their future endeavours!