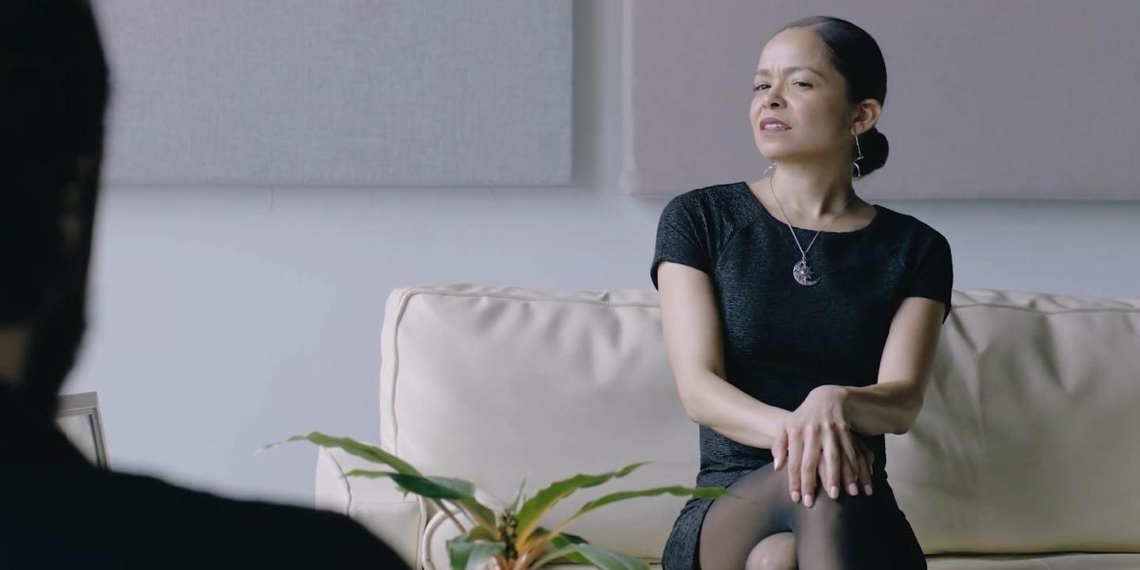 Dezera Page’s five-episode Secrets, Swipes and Lies takes sex addiction and gives it a salacious turn. Over the five episodes, its protagonist bargains with her dual lives—that of a career driven law student with a squeaky clean image, and the other, of a messy, ailing young woman driven by the fear of loss of control. Her struggle with control is a central point in the plot, and one she regularly returns to in therapy as she grapples with her own understanding of herself.

Each episode is under eight minutes, the shortest being four minutes (episode three, A Bad Good Girl).  Each of the five episodes are set in her therapist’s office. Suriya’s (Natasha Sahs) encounters and interaction with other people are shown in flashbacks as she narrates aspects of her life to her therapist, Jake (Moud Sabra). The sterility of the office is used to turn what are already charged accounts into something almost lewd, and obviously directed at the therapist with the hope of a reaction. Indeed, Sahs’s performance leaves no room for doubt: as much as Suriya is looking for answers or absolution, it is also a performance to challenge and taunt Jake. To this is added the original score: sexy, heady and pop.

In episode one, titled Split Personality Me, Suriya recounts a recurring dream: she flies through the city, her vision and movement boundless, only to end up at the edge of a cliff (though this latter part is revealed in a different episode). To fall or not is her decision. The drone shots for the dream sequence are perhaps the series’ most stirring and even authentic moments.

As Suriya moves on with her narration, the conversation turns towards her public presentation and her private life. Law student, daughter of a Christian conservative Congresswoman, and facing the possibility of becoming spokesperson for her mother’s organisation. On the other hand, her private life is one of anonymous, even risky sexual encounters facilitated by dating apps. When the therapist probes, it takes Suriya back to when she was eighteen.

An account of a one-off hookup with a much older man emerges from the end of episode one and through the beginning of episode two, Anonymou-s-ex, and with it, Suriya’s obsession with control. As she talks through the experience of having sex for the first time with a stranger, she describes a peculiar notion of power and control for herself, pitting having no choice, i.e., powerlessness, with taking control, i.e., power. In her words, she “had no choice but to take control.” These overtones of power and powerlessness run through the narrative, culminating in a series finale that complicates Suriya’s arc and her journey with therapy.

For the most part of the series, Suriya evades and deflects any questions about her deceased father. Her mother largely does not feature. But she does talk of her friends: Benjamin (James A. Pierce III) and Sasha (Lynnese Page). It is this rare glimpse into her private life away from sex that shows up in episode three, but still no less revolving around her addiction. The episode opens with yet another session with Jake, and this time, she makes explicitly lewd remarks. As typical therapist characters go, Jake is largely unfazed by Suriya, but every now and then, has to make the visible effort to remain impervious.

In contrast to her behaviour during therapy, Suriya is amiable with her friends. Which is not to say that she is without her characteristic bite; it is merely dialled down. The glimpse into her ordinary life is brief, though it returns in episode four, Ménage a Not.

The episodes do not end on clean breaks and neither do they rely on cliffhangers. Instead, story points continue on to the next episode as mild conversations rather than through compelling cause-effect chains. There is a certain non-linearity, in line with the nature of memory as well as personal healing. Characters return to older topics, as in the case of Suriya’s dreams or questions about her father.

Thus, in episode four, Sasha returns as Suriya’s chosen confidant when Jake questions Suriya’s reaction to a failed bisexual encounter. The incident itself is shown first, as the result of an earlier hookup. Besides not being bisexual, Suriya loses her upper hand, and therefore, has nothing to enjoy. Lacking power and control then is crucial to her pleasure and the high she compulsively seeks. Sasha herself contradicts Suriya’s belief that her lifestyle is well managed and under control. However, as one of the precious few cases of sound relationships in the story, Sasha remains supportive, if cautious. Page makes an impression, even though her appearance is brief.

The final moments of episode four initiate the beginning of the end. In episode five, Baby’s in a Corner, Suriya’s actions and a key character’s compliance destabilise important boundaries and structures, implying a bleak future for Suriya vis-à-vis personal growth and healing.

Throughout, Secrets, Swipes and Lies maintains its inclination for sexiness. Suriya’s love for control appears to seep into the narrative itself, turning what might be messy and perhaps even ugly into something of a tantalising power play. A quest to seduce indiscriminately—strangers, therapist, and audience as well—remains Suriya’s object, and the audience’s impression of the series.