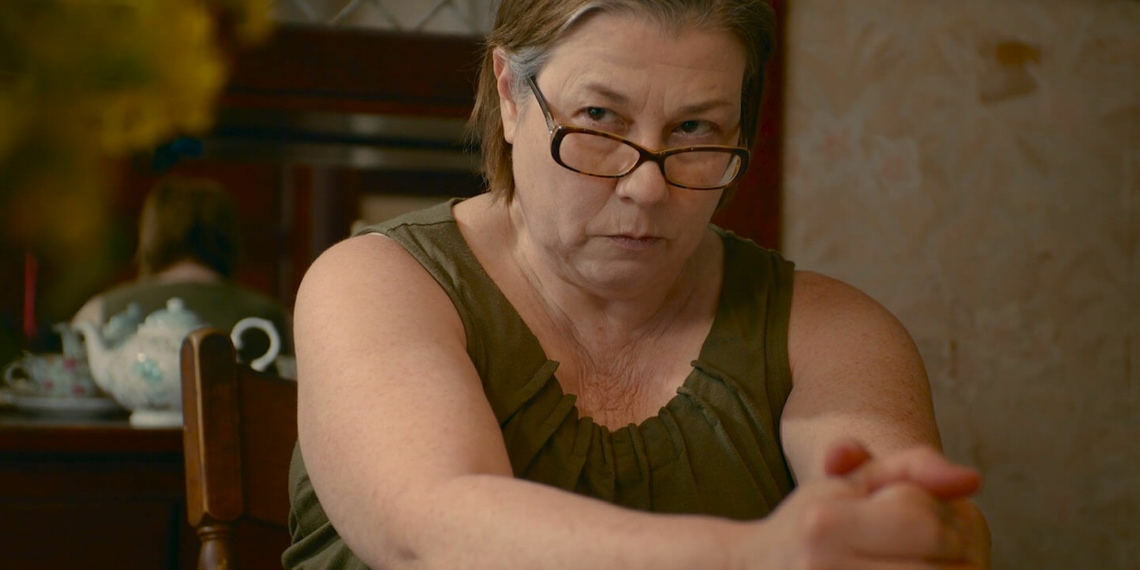 On the surface, Claire lives a thoroughly domestic life. Pictures of her family line the shelves. She plays solitaire in an empty, albeit homey house. From the looks of it, she leads a content life. Sure, she snaps at her family when they call her, and she resolutely refuses to move out of the house or see anyone, but that is just someone set in their ways, one could argue. And she is clearly a creature of habit.

Because as soon as the clock chimes the hour, she gets up without fuss or hesitation to first fill a bowl with cat food, and then another with cereal and milk. She methodically goes about what is clearly her established routine. She then heads down to the basement with the bowl of cereal, and things are starting to feel maybe just slightly not right. Mark Grabianowski’s 12-minute short, Bound has just set the stage for a chilling thriller.

When she sees a trail of fluid on the floor, something shifts in her harmless demeanour, a cold harshness sets in. The unlikely sight of a man (Garrett Botts), dirty and rather shrunken, tied up, takes form. The change in Claire sets in. Sheila Dionne inhabits the character to a T. The harshness now rests heavily on her features. The words she spits at the man conveys utter hate, and the story emerges: this is a burglar, and the murderer of her husband.

This revelation is not played for shock value, not quite. Instead, the editing makes it more like yet another thing on Claire’s itinerary. There is shock, yes, but it leans more normalisation. This is Claire’s perspective that we are following, and because it is old news for her, it has to be old news for us. Well, as much as the image of a man being held captive by an old woman can be old news.

Bound feels a lot longer than 12 minutes, in the best ways. The screenplay smoothly slips in the exposition, such that the characters and their story do not feel unfamiliar. But nothing works as well in the film’s favour as its editing, which sets a perky pace, determining the mood and consequent reception of the reveal. The story may not have worked as well as it did if the style and pace were different. The blend of its quasi-humorous, lighthearted look with the sinister horror beneath is fascinating.

Trouble arrives with Claire’s daughter (Alicia Blasingame), who is determined to sell the house. Backed into a corner, there seems to be no way out of it for Claire, and the climax answers the question: will there be panic, or more cold calculation and ruthlessness?