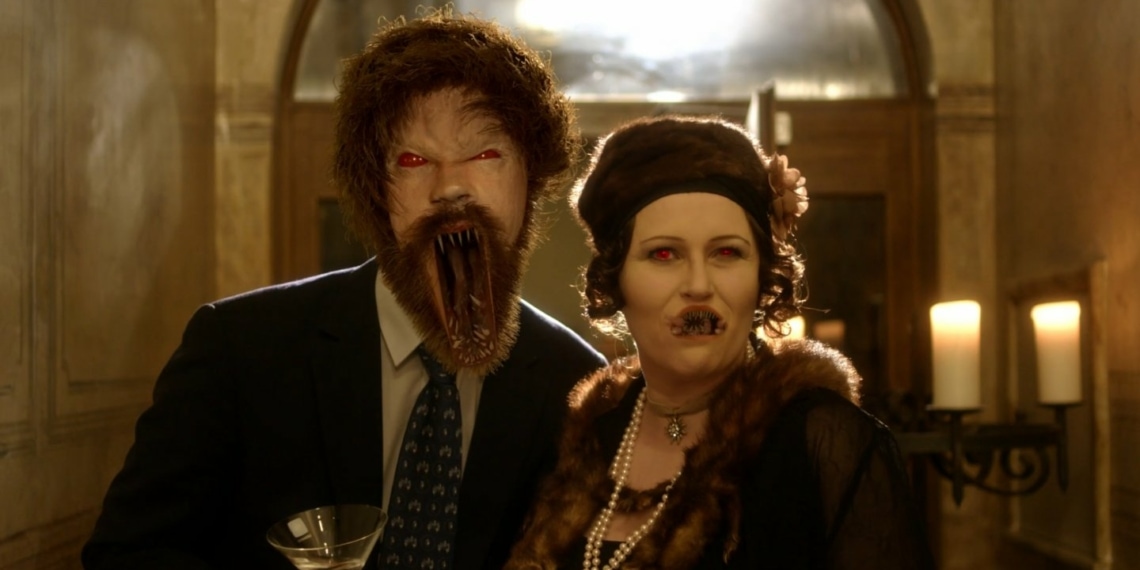 Thorsten Schade’s 24-minute Die Einladung, or The Invitation, follows a young, ambitious man as a business meeting brings him an invitation to dinner amongst an informally exclusive group. But this is a horror flick, so of course, there is more to it and not what said the man would like.

Tom Renner (Orestes Fiedler) is ambitious, but painfully timid. He listens to positive affirmations on his way to work, stammers through presentations, and generally goes through life stumbling and stammering. Tom meets Birkenholz (Neven Nöthig), a relative giant compared to him in every way, for a business proposition. Schade cleverly plans clues to what is coming, while keeping the focus on escalating the narrative with acute discomfort. Saw shaped dental floss becomes the least of Tom’s concerns once he meets Brüggen’s family and business associates. This is white people’s Get Out, if rather watered down.

Of the characters in the supporting cast, it is Birkenholz’s mother, played by Maria C. Liedhegener, who is perhaps the most unsettling, second to Birkenholz. The screenplay takes the usual innocuous motherly concerns about undernourishment and good food and twists it with disturbing connotation. A sneaky mid-credits scene twists yet another wholesome symbol of familial ties, but we won’t spoil that here.

Almost everyone at the dinner gathering has something to say about Tom’s weedy frame, and you cannot help but feel especially on edge looking at his wounded forehead, the blood dried right there, as though it is signalling the sharks. He certainly cuts a vulnerable figure among the hulking men and women who, unlike him, have no doubts that they belong. Tom, on the other hand, is eager to both blend in and stand out by proving that he is worth their attention and respect. Strategic close-ups carefully drive home the uneasiness.

The Invitation (Die Einladung) is as much about ambition and the desire to prove one’s worth as it is about more palpable horror elements. And when it comes down to it, you are more likely to experience the horror of faking confidence than body horror. Take notes.

Die Einladung: The Horrors Of Fitting In