‘Do No Harm’ Reveals What Happens When A Doctor Gets Stressed! 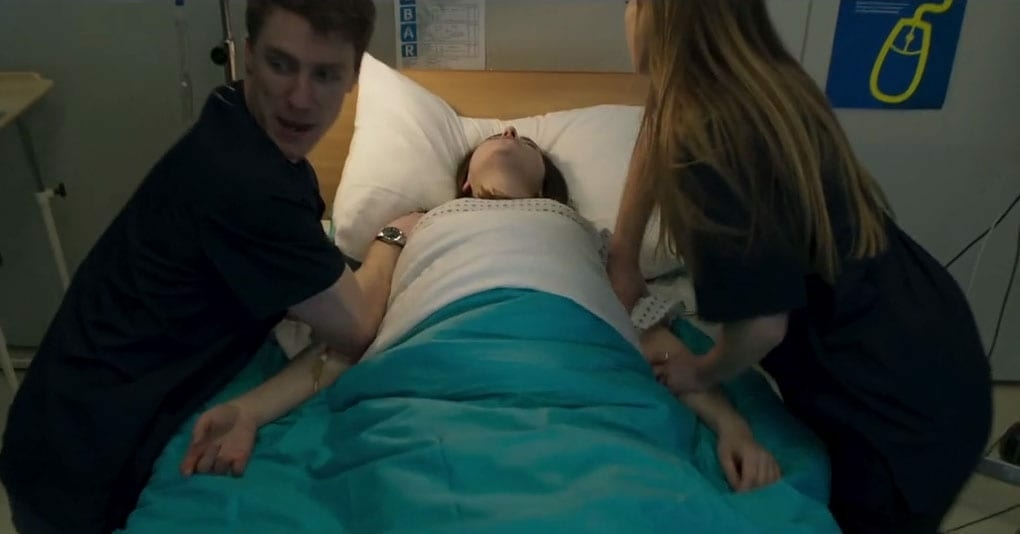 Sam Blakeney-Edwards’s, ‘Do No Harm’ is a psychological thriller that uncovers the chaos that occurs in the operation theatre that leaves it’s after effects on those in the room. In the runtime of 12 minutes and 53 seconds, it talks about a junior doctor, Dr Bloom (Oliver Rednall), who is on-call for the night. His unslept eyes, visible right from the opening frame are a dead giveaway to his state of mind. Dr Bloom is burdened by the responsibilities that come with his profession, but more so, by the drawbacks of it – the hard reality of living with not being able to save all his patients.

His patient Laura (Clare Mcgowan Duffy) has a seizure and is nearly losing it. Despite the best of efforts, she knows she is on borrowed time when she starts to sense the presence of a shadowy entity. Meanwhile, Dr Bloom is struggling to hold on to his bearings. The pressure of being on-call, the limited time given to rest, the demands of his skills, all make for a nightmarish visual both in his mind and ours. As we get to see what happens along the corridors and behind the operation theatres, we get the hint – this is not for the faint-hearted. The night comes with so many challenges that his poor coping mechanisms ultimately loses in the battle of maintaining his composure.

Javed Malik’s screenplay, which to some extent might be considered an extension to the medical drama we have grown used to seeing adds a surreal element of OBE (out-of-body-experience) to the narrative. His script, which is watertight with its plotline and character depth, is well matched by Aaron Medway’s cinematography. The implementation of the depth of field, be it the shallow depth of field that gives the cinematic look to the canvas or the brilliant use of lighting to contrast it only adds to the visual appeal of an otherwise confining interiors. Add to that, the usage of props within the internal environment only added a warm tone to the screen. While the major part of the film is set to warm tones, the strategic placement of the back, key and fill night only managed to create the multi-layered dark tones, enhancing the storytelling, making it more engaging.

Sam Blakeney-Edwards and Sean Siegfried’ seamless editing allows the audience to gulp in the dismay and the trepidation of the characters and their disheartening spiral. While Clare Mcgowan Duffy (Laura) is fine and convincing in her part, it is Rednall (Dr Bloom) who is the show’s stealer. His exasperated look, the shock and utter disbelief on his face, the stress, which is well highlighted by a patient commenting on the whiff emanating from him are all brilliant, to say the least. Care could have been taken to avoid minor slips such as the fact that surgeons having any kind of accessories on themselves is almost unnatural, even it’s just a watch or that they prefer to have their hair tied, well away from their face than let loose, would have made the characters come across as more convincing.

Nonetheless, ‘Do No Harm’ is engaging, because of how ironical it is. When a doctor breaks the very first code of a doctor-patient relation, you wonder what else is being negotiated or worse, still, compromised; and yet you don’t feel like blaming as you see how flawed they are, for they are humans too…

‘Hayley’ Tells You of The Horrors That Seldom Get Fully Resolved

How I Got To The Moon By Subway Is The Emotional Journey Of A Man Who Is About To Lose His Voice...