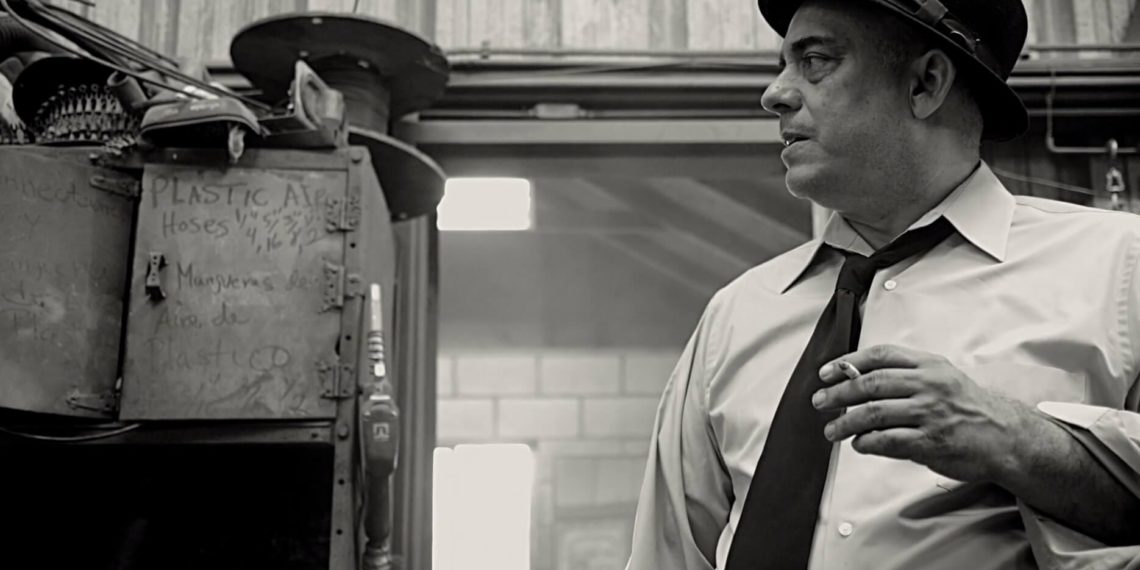 ‘The Grey Area’, directed by Errol Sack is a series (season 1), comprising of 6 episodes at a runtime of total 42:23 minutes. Co-produced by Errol Sack, George Sack Jr. and Frank Affentranger, ‘The Grey Area’ is a motley of episodes of bizarre events, set against peculiar backdrops, but with nail-biting climaxes. When faced with confounding circumstances, what would you do? What path would you choose? Do you even have a path to choose from? The series explores the primitive instinct of a person trapped and in the bargain offers the audience a slice of absolute horror filled with thrills and chills in equal measure.

The pilot episode opens with Mr Thompson, played by George Ortuzar whose car breaks down; mercifully, near a garage. Upon calling out for help, he finds the place to be utterly deserted. Amidst the abandoned vehicles, nearly losing his patience and mind, he yells out, asking for help. Just as his despair begins to tear him apart, he sees a woman (Lucy Yang), self-assured and elegant. She doesn’t seem like she belongs there, he is simply relieved to see another human. But, that relief remains shortlived.

Sack deftly places ‘Mr Thompson’ as the opening episode to the series. The episode is not only a complete package of a good plot, acting and but an amazing introduction to thetexture of the remainder of the episodes.

Roger (James Zahnd) is caught in the most confounding of all situations. The events turn so quickly, that a blink and you’ll miss the beat. In a small gathering of friends and colleagues, Roger is ecstatic to inform everyone about his promotion. As he goes about sharing his newfound joy, a tremor, most likely an earthquake nearly tears the house down.

The world seems changed once he recovers his composure and runs out to find his friends.

Charles (Mark Krenik) lights his cigarette and welcomes the lady, Lynn (Amanda Santella) into his house. From the looks of it, all is going well. But, by now Sack has established his modus operandi. He attacks, when you least expect it. Charles anticipating the time of his life prepares to serve wine to his date, only to find her nothing like he anticipated.

The woman he walks in, arm-in-arm is the same waiting for him. His abject shock, the sudden turn of events addition to character spin, makes this episode worth its while.

Perhaps an expression has never been more aptly used than in this case! In an unknown location, injured and hand-cuffed, a man (Peter Koch) finds himself lying on an estranged land. He sizes up his location and starts walking, to stumble across a suitcase filled with diamonds and cash. As if that wouldn’t have alone helped, the attaché also contains his defence security ID.

Out of nowhere, shots are fired, bullets are dodged and the hunt begins. In the cat-and-mouse chase, the hunt and the hunter entwine to reveal a shocking detail of the location and reason for the hunt…

James (Josh Nasar) enters a train and shows his ticket to the ticket examiner. It doesn’t take long for him to realize that his co-passengers aren’t the best he’d have hoped for. As the journey continues, his small talks meets with cold stares and unfriendly requests.

‘Time Train’, like all of Sack’s work, hits you when you least expect it and that too from a quarter least expected! With a shaken mind, but determined to reach his destination resolve, James makes a final attempt to depart the train and the perplexities of time entangle him into an astonishing web like none other!

Episode VI – The Life I Never Had

Ray (Thomas Gunter), a vagabond, reads a discarded book. As riveting as the book is, he forgets his hunger and gets absorbed into its events. So interesting becomes the book that he loses track of what’s just in its pages and what’s around it in reality.

As the finale of the series, the episode ingeniously brings to its plot all the relevant characters from the earlier episodes, thus answering pressing questions. As Ray discovers the price of reading the book, the audience is paid for their patience with revelations of the true subplot, the reason behind its titular heading and the mystery that envelops each episode of the series.

The perplexities which Sack intended to landscape in the series are done using the monochromatic colour palette. Co-written by Errol and Andrew Wayman, the script is challenging as in an effort to maintaining the mystique around the stories, very little is revealed, making it a tad bit confusing at times. The choice of sardonic humour on serious help reduce the confusion either.

The music by Dom Aiken is apt for the series. The editing is crisp and the acting is decent. The narrative style is cyclic, so it does require patience to sense and fully comprehend the character’s trajectories or plotlines. Perhaps a more watertight script would make this a complete success. But, for now, Sack’s ‘The Grey Area’ is deserving of one thing – upping the standards of the thriller and mystery genre!

‘Revelations’ Is About A Confession Unlike Any Other…