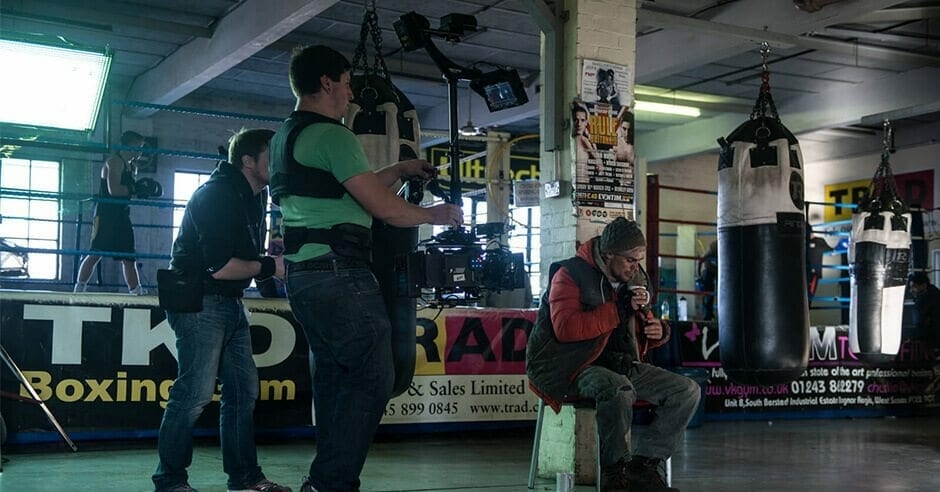 Mettle is a Sport, Drama film directed by Kyran Speirs. This story revolves around a homeless man who is given a chance to stand up and fight for his living. The honesty of the homeless man leads him to that chance he had always been waiting for. But when his spirit is put to test, he runs away, but the determination to lead a better life brings him back to fight for what he deserves.

Kyran Speirs is a very talented man and this story is one of a kind. In fact, “Mettle” is a film inspired by the director’s real-life story. He has worked in a lot of short films which have given some brilliant results. Let’s see what the director has to say about his award-winning achievement:

Q. Kyran, I have a thing for boxing. I love the sport. I never miss a film which is specifically on boxing. Do you also share the same love for boxing?

I do. Many of my friends are professional boxers, I’ve loved boxing ever since watching The Champ as a kid and crying my eyes out. Then of course Rocky I blew me away and I was hooked.

Q. Since you were also a boxer, tell us, how does it feel to be in the ring and fighting your opponent?

I did box, but not on a professional Level, although I trained with Pros daily and lived in a gym, it was just at a White Collar level. Yes, I did have a few fights, I would like to think my skills were ok for that level. I loved each fight, the buzz, the crowd, the preparation. You don’t have time to be scared and, to be fair, at our level you won’t have a killer blow, you have a job to do, get in there, land and block some punches. It is a very lonely sport, but you have a great respect for your opponent. You experience something together that is very unique and powerful, very primal and in some respects spiritual which may sound odd. You cannot help but respect your opponent. That’s what I love about boxing, the respect it teaches you to have for other people.

Q. Now, I have read that, this story is actually inspired by your real life story. How was it like back then and when did you think of making it into a film?

It is inspired by true events yes. It is something I was very hesitant about admitting at first I did not want it to feel too self-indulgent. Like many people, I hit a real low in life many years ago and ended up homeless. My old boxing coach heard about my condition and urged me to come stay at the gym underneath the railway arches of London Bridge. Two of my boxing friends were also homeless and we all stayed at the gym. I would train, eat healthy and clean the gym every day. Even though the situation was born from a dark place it was actually one of the most amazing periods of my life. I have never felt more free and liberated than when I was homeless in a boxing gym. The gym was a very inspiring place, it just felt so filmic, the whole situation and setting. One night after I had cleaned the gym it was empty and I was on my own. I sat down and thought one day I will make a film based on these experiences. My aim is to make the greatest ever British Boxing feature film. The feature is very different to the short and something I am very passionate about. The two other homeless guys I was talking about, one (Ben Day) now owns his own successful gym in Euston and the other (Darren Hamilton) became British champ, so he went from ‘tramp to champ’ essentially! Mettle was loosely based around their story as much mine. There was no bully at the gym we were at but, I needed this character in my film to show the inner creature inside us that puts us down and tries to put you in a bad place. He was my metaphor for depression, hence why he appears twice. Some people told me that I should have lost one of the altercations with the bully, but I disagreed as I wanted to express that depression comes and terrorizes a person and they can ignore it and just carry on but then it comes back with a vengeance. The whole film is a metaphor to fighting the creature which lurks inside our soul. Ultimately, you have to face your inner creature and of course, our protagonist does just that. I wanted it to feel very visceral and raw and, at the same time, I needed a beautiful emotion that we can all relate to, boxing fans or not. I never thought people would like it like they have. The film has been very well received in the American festival circuit – including your good selves. In fairness, there is so much wonderful talent out there at the moment there is an abundance of great, great short films. I feel humbled that you guys have asked me to chat. Thanks!

Having an Italian grandmother and mother, I have always been a fan of Old Italian cinema so neorealism is a great thing for me. It was always going to be a boxer; I needed it to feel raw and honest! It was an honest story so it needed an honest performance, having no dialogue made it an easier decision. Originally it was going to be another boxer, but he had to pull out due to a press conference and I sent a load of pictures of some other guys from a gym in East London. Freddie stood out; he is a good looking lad on camera. When we spoke on the phone I loved his enthusiasm, he had never acted before, so it was a risk, but when we met up for rehearsals we had an understanding of each other, I used the analogy of acting to the same as boxing. I told him to ignore the crew, they are like the crowd. Ignore them. Your opponent is the camera, just concentrate on that. I am your corner man shouting instructions so just listen to me; I want you to win so trust me. We likened timing and beat of drama to timing and beats of a fight. Freddie really listened; he is smart and had a natural presence. We spent hours just perfecting his walk in rehearsal. His dedication was unreal. I think he was outstanding, as was Ben the coach and Robert the Bully. They were all great, but Freddie was exceptional he is a great pal now, I love him. He is defending his Southern Area belt in October. He is a talented boxer who has a great chance of being British Champ next year and I believe he will get to world champ.

Q. Apart from all the films you have done, this must have been a special film for you. What is the most memorable scene in the film for you?

This was and is the only film I have ever written and directed – although I have co-written another short based on the London riots, which we are filming in October. Yes, this is a very special film for me for so many reasons not that it was a personal story but it was my first. I lost my directional virginity to this film so I love it dearly. One scene that sticks out was towards the end when our lead (Freddie) is entering the ring to face our Bully (Robert). Robert did not quite know how the film was going to end, I kept it from him deliberately. Robert had been punching Freddie (a notorious and champion boxer) very hard earlier in the film (which he was initially worried about) to keep in with the realism I would then break the news that for our final scene. It was Freddie’s chance to now fight back, I explained that as when he was punching Freddie (for real) I would need the same done to him, real punches. I told him he would probably suffer a real cut lip or a black eye, we could even bust his nose and did he mind? I explained why, to feel true and honest with the sport and the story. To his amazing bravery and credit he nervously agreed. Of course, as we know this did not happen, it was never going to happen, but I wanted him to have that element of fear his character needed for the scene – again, he also is not an actor, so there was no better way for the camera to capture the natural fear than to make him feel scared! Cruel I know, but it worked. I got the performance and he got away with an unscathed face.