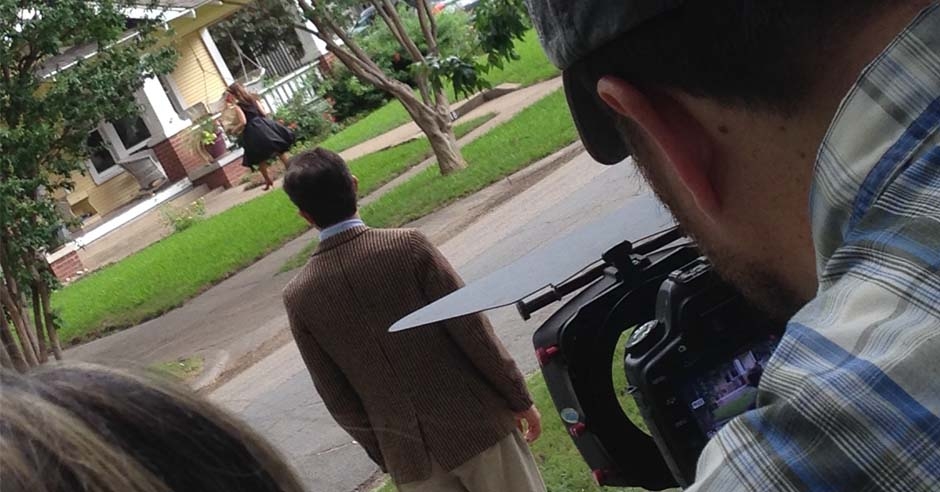 The Last Door,­ I was so curious to watch the film after the first time I read the title of the film. Questions were pouring up in my mind!

The Last Door is a fifteen minute grippy thriller short film directed by Misty Hayes. The short film is based on a serial killer ­ James ­ who appears to be a typical door to door vacuum salesman but carries a hidden darkness that lies just beneath his well manicured good looks and his disarming smile.

Here’s what Misty has to say…

So, Misty ­ What was your inspiration behind making ‘The Last Door’? What was it that excited you to choose this subject?

Hi there Short of the Month Team! I can’t tell you how excited I am about getting to talk to you a little about my short film The Last Door!

My best friend, Misty Spitzer, was dared by her son to enter an online short story competition. She ended up writing The Last Door and winning the competition. The first time I read her story I saw all of it play out in vivid detail in my head-that was the moment I wanted to turn it into something real and tangible. A great story will feed your imagination; she made it easy for me to plot it all out.

James is the serial killer in the story, but writer Misty Spitzer has humanised him to a great extent. If you can share a little thought on that.

The great part of this story is that Misty wanted to give him life-make him come full circle and give the audience the feels-in that he was made a monster, but when he finally came to terms with how horrific he was in the past; it meant he’d truly served his penance…’till he was worn down to nothing but a shell of his former self.

“Karma”-played beautifully by Katharine Franco-finds these monsters and makes them pay for their crimes by making them re-live their mistakes and transgressions over and over again until she moves on to the next one. Maybe she should be nicknamed The Black Widow instead?

Sam Swanson, who plays James in the film has recently won an award for Best Actor Male at ‘Short of the Month’s’ June Online Short Film Festival, in fact all the other performances in the film were perfectly executed. Misty, how difficult or easy it was for you to cast the right actors for this particular film?

Oh man, I can’t even get into how lucky we got with casting. Katharine Franco, Sam Swanson, Cody Dowell, Suzanne Racz and the rest of the cast couldn’t have done a better job. We spent a good eight to ten hours in casting calls alone, and still had to call Sam and Katharine back in to read together to make sure they had chemistry.

And generally, what’s your take on casting when it comes to a short film, How do you approach to this process, keeping in mind the budget constraints?

We wanted to make sure we had the best cast we could find so taking that into account, we spent a lot of time going through video submissions, casting calls, emails, and even FaceTime reads. I had one person I spoke with via FaceTime that was reading all the way from London. I think it helps to have such a great script to draw great talent in.

Misty Spitzer, who also won an award at SOTM’s June Online Short Film Festival for ‘Best Story’; how did this collaboration take place and how was the experience? Are there any other previous collaboration between you two as well?

Misty Squared (There needs to be an emoji for that) aren’t going anywhere. I think we want to work on a comedy next, but we’re not exactly sure what about-so basically we have it all figured out. No, really though, just something the complete opposite of The Last Door to get us out of our comfort zone.

To end this, when can we expect another kick ass thriller from you and your team?

Currently I am collaborating with Michael E. Gomez, writer/producer/actor on a new short film-drama/action-called Tiem. Yes, you read that right; it’s a play on the word Time. Maybe we’ll see your team again sooner, rather than later!

Indie Shorts Mag wishes Misty and her team all the best for their future projects. You can contact Misty or get updates about her upcoming projects on her Twitter account here.