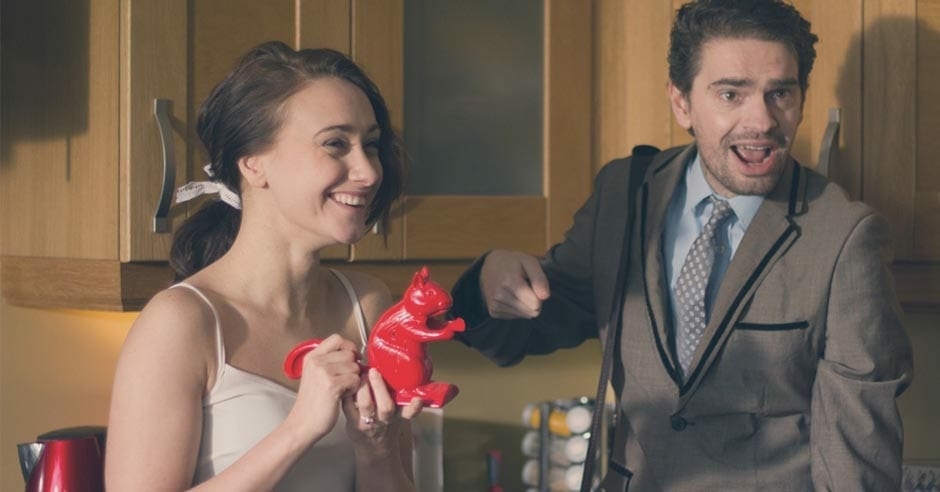 When Short of the Month first asked me to do this interview, I was actually wondering about what this short film would be about, carrying ‘love’ and ‘chairs’ together in one single title. It really sounded interesting. And the uniqueness of the story kept me glued to my screen.

Love & Other chairs is a story about Julian, who has a problem; every woman he meets turns into a chair. After trying to make it work with his girlfriend-turned-furniture-piece, he becomes desperate for love.

After winning the ‘Short of the Month’ tag, ‘Best Original Background Score’ & ‘Best Director’ award at SOTM’s June’s Online Short film Festival, Christopher Bevan here talks about his film & the uniqueness it carries with it.

Here’s what Chris has to say…

So Christopher, what really inspired you to pick such an offbeat concept ­ bringing love and chairs together in one story?

Love & Other Chairs was written by Luke Kondor and as soon as he approached me with the script, I knew it was something I wanted to be involved in. It was such an eye-catching idea and the script that writer Luke had developed was brilliant at showing not just the darkly humorous concept, but also the heartache Julian goes through. During development, we discussed the idea of metaphors taking on physical manifestations, and this idea that the chairs would come to symbolise the failed relationships and times Julian had overlooked his loved ones seemed to resonate.

How difficult was it to convince your actors to do a film with such an ‘out­of­the­box’’ concept?

The whole cast was on board with the film right from the start as it was always about the characters and how they worked within the story. Having an ‘out of the box’ concept is one thing, but if you don’t have a story and protagonist the audience can get behind, the film doesn’t work. Fortunately, Luke had created something in Julian that we felt was strong and I know Mark Drake, who played the role found a lot of depth in the character and meaning in the concept. So he and the cast in turn were all behind us and we had no trouble convincing them to get involved.

We read about you that you’ve been making films from the past 10 years; Chris, how different or special was this film to you as compared to your own previous works?

I started making films back in 2005 when I was 16 with just a Handycam, a few friends and some crazy ideas. My professional career as a director was something that evolved gradually over the last few years and I’m still learning with every film I make, but Love & Other Chairs was a project that I enjoyed tremendously. Luke Kondor as a writer has boundless enthusiasm and is a great storyteller to work with which made the whole process rewarding. I think it was one of my first attempts at shooting something with a comedic element too and the narrative structure was different than anything I had attempted before. So that was a big learning curve. But the response to the film has been brilliant and the audience reactions have been very enthusiastic, which for me has been the most special part of the whole experience.

What made Love & other chairs more special was its music & cinematography, what were you key inputs or notes to your cinematographer and composer?

I worked closely with our cinematographer Karl Poyzer on the project and I particularly wanted there to be a distinction between Julian’s life with his partner and without. So when things are ‘happy’ in his mind, we filmed everything with fairly static and slow-moving shots, to create an almost floaty, dreamlike feel. The opposite is true when things start to fall apart for Julian and the camera becomes increasingly handheld and there is more movement. Karl is an exceptional DP to work with and has gone on to shoot some fantastic films and commercials in the last few years since filming Love & Other Chairs, but our working relationship always starts with looking at the script and getting a feel for how to tell the story best. As for the composition, Jonathan Armandary our composer did a terrific job of creating the right feel for the film and we were particularly inspired by the theme from Pixar’s ‘Up’ which is by turns humorous and heartbreaking in such a short space of time. Julian’s existence in Chairs is fairly whimsical and I wanted the score to reflect that, as well as the sadness he finds when the realisation hits towards the end.

5) To end this, when can we expect another offbeat short from you and your team?

I think Luke our writer is the best person to ask this question too as it was his concept and screenplay! You should keep an eye on him and his work as I feel he is one to watch, and certainly there are more offbeat stories from him to come. As a director I am still finding my feet and getting a feel for what style of film I would like to make but I don’t want to be tied to a style or genre yet. I’d love to work with Luke again so who knows, we may have another quirky ‘chairs-esque’ short sooner than later! Watch this space!

You can get more details and updates on Christopher upcoming films on his website – www.christopher-bevan.com.