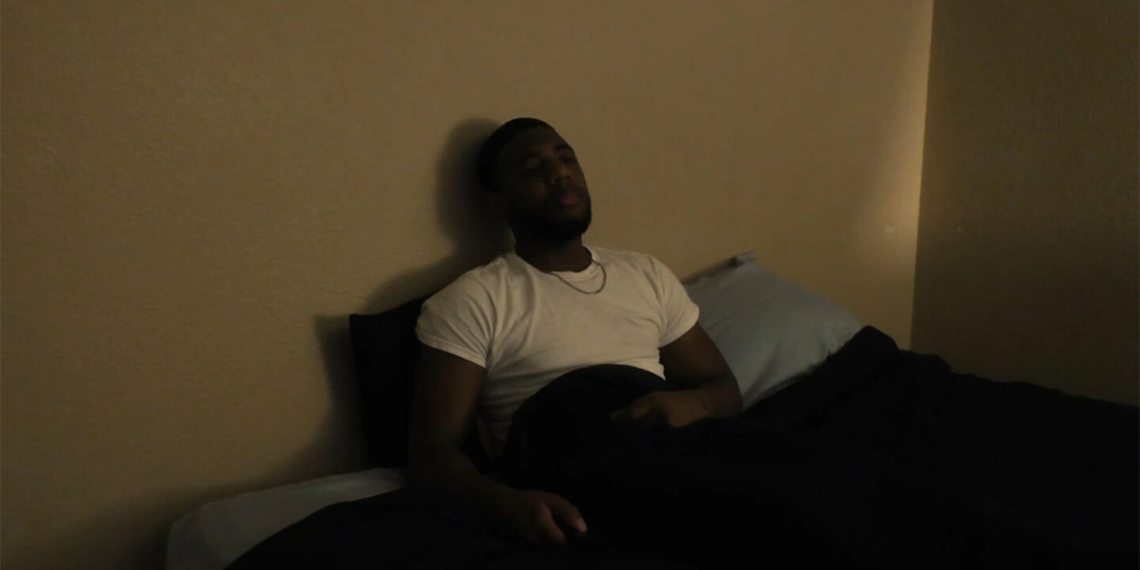 Jalen Tellis’ Parasomnia is a 8-minute horror film based around the terror of sleep paralysis. Its protagonist, a man struggling with chronic sleep deprivation, faces demons both literal and figurative as he is caught in a spell of complete immobility.

Through sleep paralysis, the film utilises the fear of a complete loss of control—something that will resonate with viewers even in the absence of the actual experience. The young man (Terence Blanton) lives alone. In fact, the narrative never moves out of the confines of his bedroom. By not using names or specifics, the film constructs the plot as a sensory experience, taking place within a dark void which will disappear in the light of the day. Thus, something like a dream: vivid and significant as long as it is happening, evaporating out of existence the moment it stops.

A phone call with a friend provides the necessary exposition while the TV gives the context to sleep deprivation. The man is deeply fatigued and sleep deprived, ready to call it a night. In fact, he is introduced to the viewers as slack and motionless; already immobile with exhaustion. An air of apprehension is building in the film from the beginning. Stasis must sooner or later lead to movement and action. Everything is too still, and the drone of the TV merely reinforces the feeling of passivity and stasis.

The climactic action (and its corresponding forced inaction) makes sure to be straight out of nightmares. As the man is compelled to experience horrors (enacted by Sedell Brown) with no ability to control the events or protect himself, the dread is indeed resonant. The final seconds of the film double down on the compounded fear of the dark, sleep paralysis and nightmares.

Parasomnia delivers its easy to digest and built to entertain horror in a modest eight minutes. The staples are all here, and the scares are waiting in the dark.