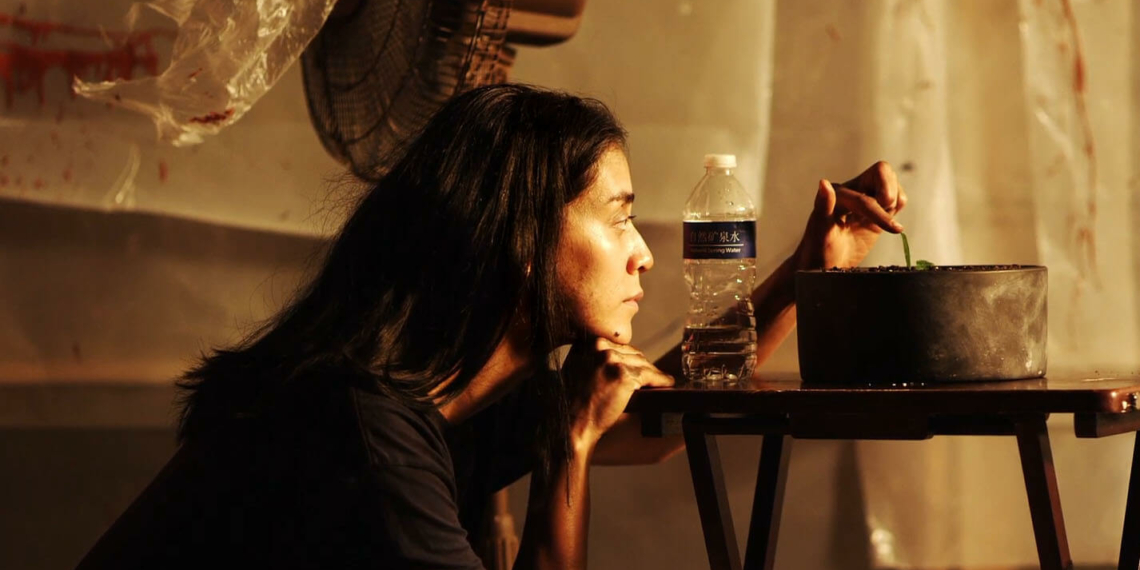 Bo Zhang’s Bubble is the product of a happy confluence with theatre. The story of a woman choking on a plastic-riddled life, the film is strongly grounded in theatrical methods and therefore uses mood and emotion to drive its narrative.

There are no dialogues in the film. In fact, there is no other character besides the unnamed woman (Tina Loranger). The camera, almost always frontally placed, is limited to the confines of her home. Messages in Chinese and English are written on the hanging plastic: It’s okay, Simple, People and Us, Quietness, and so on. When the woman first arrives in January, dirty and dishevelled, there is nothing in the featureless space but plastic. By March, she has made it into her home. Things should now be looking up.

The mise-en-scene is styled exactly after the stage, dramatic lighting and all. A bed, a stand fan, and a side table are usually all that is shown of the furniture in the room, but there is also an old, broken TV and a chair. Though other aspects of the room are explored, it is primarily the bed (which has a sort of Asian look and feel to it) that the camera keeps returning to. Plastic lies all around, up the walls as well. The woman tries to remain functional and hopeful despite it, almost trying to live as though there is no problem. But the amount of plastic continues to grow. Months pass, the problem only becomes worse.

The woman never speaks a word, merely existing in this place she has made her home. Her only companion is her tiny plant, swallowed inevitably by the ocean of plastic. When she finally takes stock of the damage, she makes the first and only sound in the film: a cry of frustration and something akin to agony.

Bubble expresses the story with excellent minimalism and beauty. The home and hope that the woman finds turns on her, forcing her to choose between yet another uphill battle or let herself drown. By striking the right balance between dramatic and subtle, Bubble has brought together film and theatre just right.