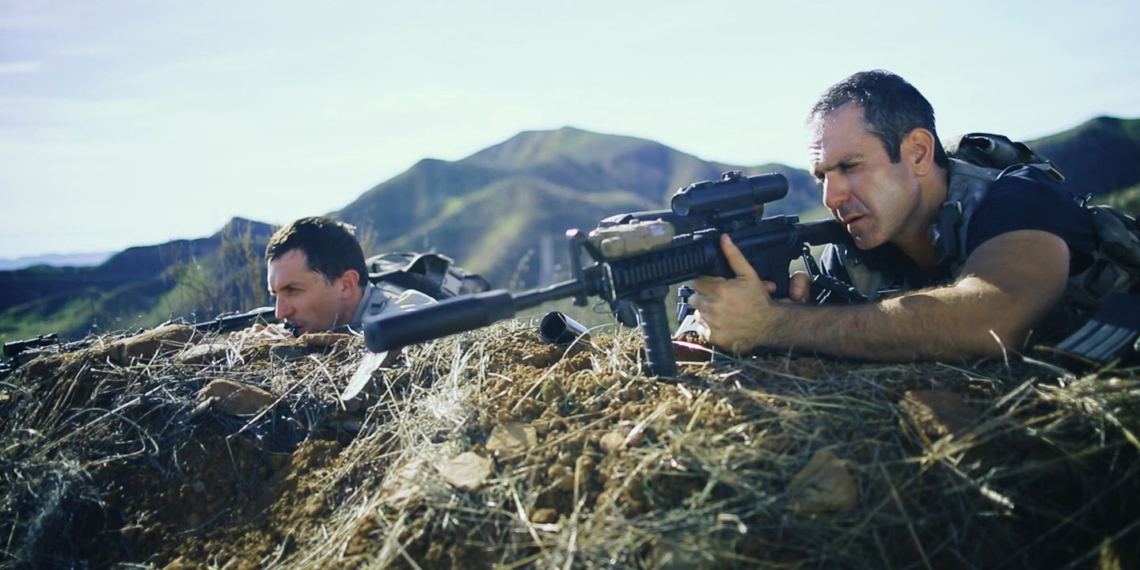 Aaron Cohen’s Overwatch is an 18-minute drama centred on the lives of its characters, wrapped up within a very immediate war. Largely stationary, the film carves out a space for the personal while the war makes itself felt dangerously close.

The first few minutes of the film is mobile and filled with action. The camera follows along as two American soldiers race to their destination, shooting their Middle East counterparts whenever they can be found. Given the movement and the all-beige colour palette, it does not feel unlike a video game. But this soon gives way to the two men settling down on higher ground, their targets in a small village below. A conversation begins to take shape.

The war does not really recede to the background, in that Dylan (Cohen) and Max (Tony Nevada) continue to shoot at their targets, but the enemy mostly does not appear on screen any longer. The camera stays on the two characters as Max tentatively asks about Dylan’s ex, Megan. As the only two characters, Dylan and Max are made to be a complementary whole. Where Dylan is hot-headed and driven by his anger, Max is more stable, compassionate and thoughtful. They display this dynamic right till the end.

Megan and Dylan’s breakup becomes the central topic of their conversation, as Dylan growls and snaps at every mention of her name. The irony of it is that Megan herself does not exist within the film proper, appearing in a wordless post-credits the-man-and-his-beloved home video montage. It stands in contrast to the entirety of the film which is heavy on dialogue, relying on it to drive the plot forward.

The conversation revolves around why Megan broke up with Dylan, Dylan’s complaints about her, and Max’s efforts to defuse Dylan’s anger and nudge him towards reconciliation. The dichotomy between the life or death situation that the characters are in, and the mundane nature of their conversation is the defining characteristic of the film: regular lives suspended to fight for someone else’s bloody schemes.

The climax is an abrupt, anticlimactic one, bringing the conversation to a decisive halt. Then silence. The colour scheme, which had shifted to neutral after the opening, now falls into overwhelmingly blue tones.

Overwatch is an attempt to show how war puts lives on hold, and changes them irreversibly. Megan as the defended and maligned idea becomes the emblem of this, an abstraction to represent the hope and loss of a regular life. The two men who finally leave that hillock will never be able to reach her.