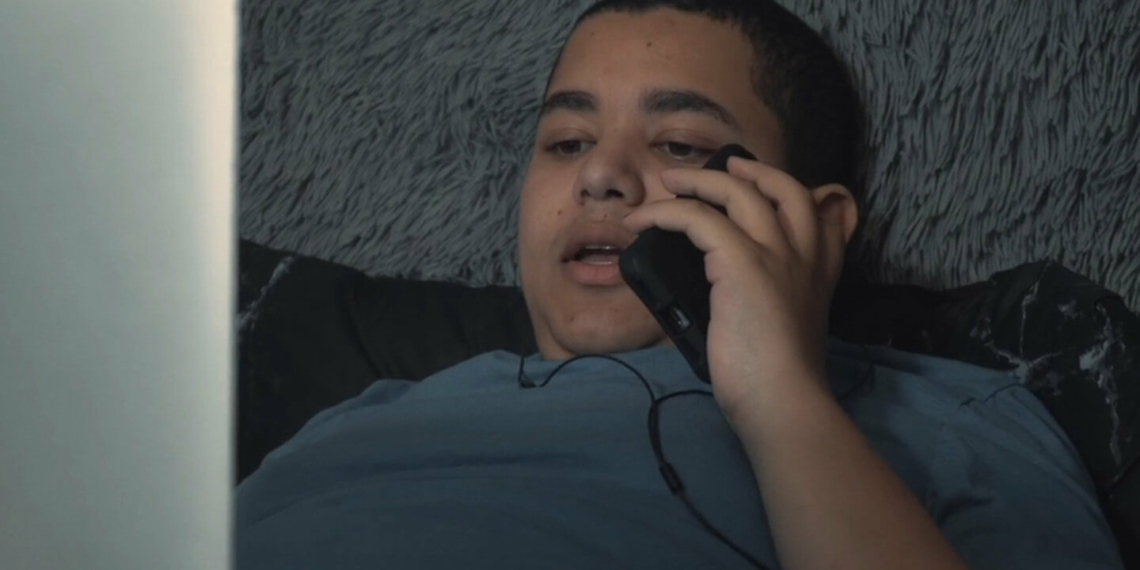 Kabir McNeely’s 14-minute My Name is Moe is a personal exploration of a teenage boy’s relationship with himself and with the world. Moe lives with an eating disorder, body image issues and social anxiety, all connected to his obesity.

McNeely plays Moe. His search history is filled with queries about losing weight (fast). His parents (Mira Stern, Geoffrey Kostal) struggle to get comfortable with the fact of his size. Hostility and microaggressions are routine. As a result, Moe can no longer interact with the world. He pulls his hood low over his face when out. He makes plans based on how much time he can have to try some last minute weight loss techniques. In almost every aspect of his life, Moe the person is subsumed by Moe the fat body.

Using a televisual look underlines Moe’s psyche. The camerawork often uses flat compositions that isolate and even cage Moe in. Frequent zoom-ins follow Moe, almost echoing a reporter’s camera. The intensity of his social anxiety is coded into the film’s form itself. The 4:3 aspect ratio, bland mise-en-scene, and a focus on sound reinforce this TV reportage-esque aesthetic.

The climax is overshadowed by a brief scene between Moe and his P.E. teacher (Brandon Leland) that is meant to subvert and point to the unlikelihood of the supportive teacher trope. While Coach Skip has been supportive up till this crucial point in the narrative, that support has both run close to discomfort and had hints of insincerity. In this scene, these elements make their presence explicit. Coach Skip taunts Moe. As Moe’s rare source of encouragement swiftly collapsed, the film shuts down the sound to express the magnitude of it all.

For the climax, Moe is once again put on the spot, this time at a party. How he fares could introduce positive change in his social life or make everything plummet further down. This is made all the more fragile by his coach’s words, a wound yet to settle. The lack of dramatisation appears to acknowledge this, as if remaining still so as to not rock the boat.

My Name is Moe will initially appear deceptively simple, too much so. But stick with it, and it reveals its hand. The simplicity has its own arguments to make.