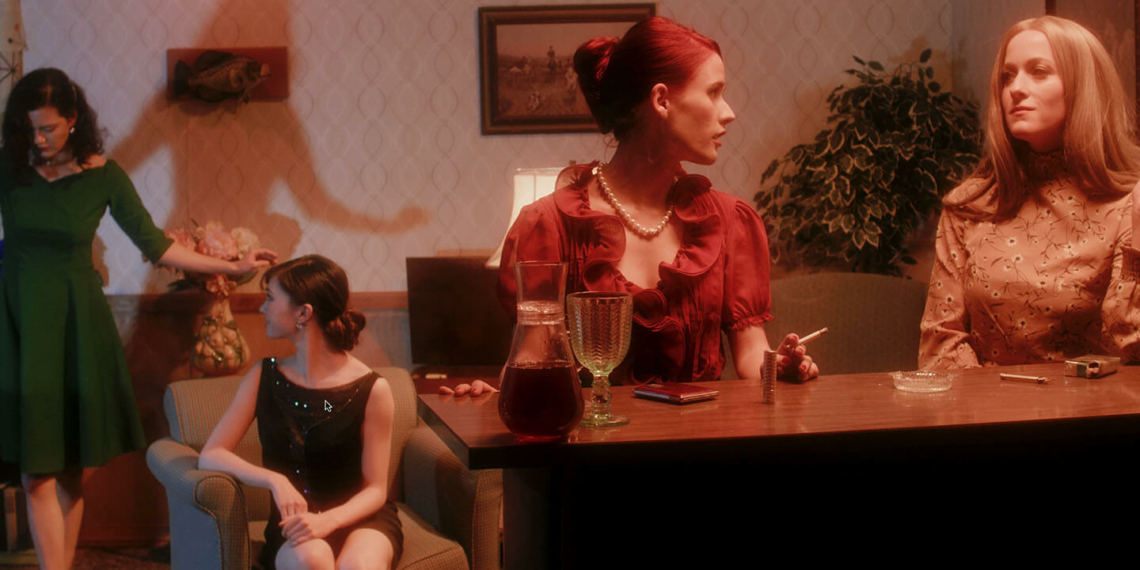 Richard Corso’s The Switcheroo Room opens with a startling audition scene. Marilyn Monroe (or at least someone mimicking her) delivering a monologue in a loop, paused, resumed and picked apart at the whims and desires of the powers that be of Hollywood. Written by Gregory Ferbrache, The Switcheroo Room travels to the seedy underbelly of classical Hollywood, where replica Marilyns and Audreys and Sharons are available like products off a catalogue.

A nameless group of replicas (Ryan Lucy, Haleigh Burckley, Emma Moody, DeEtta Jain, Aletheia Matthews) wait in a room with no windows, the place like a warehouse and the people like goods. The windows are drawn on, like artificially added enrichment for animals. They embody famous stars, ready to replace them as and when necessary. They have been here long; bitterness and disillusionment mark their words and actions. Only the Audrey Hepburn replica (Lucy) still has any notion of naive excitement in her. For which she chafes on the others, of course.

As products of a rigorous system, stars are a face, the person easily replaceable. Hence why there are rumours of Grace Kelly being switched and why Suzan Ball was buried when she was not getting the ideal press coverage. A chilling metaphorical system, closer to the real thing than anyone would like to admit.

The men in suits come in every now and then, either to inspect them or because a switch is needed. In these instances, colour drains out of the frame, and the women freeze: the ideal mannequins, except they are also the products. What is interesting about this is that though they ‘‘freeze’’, they do so while acknowledging their aliveness. Which is to say, the show of lifelessness is for the suits, in effect critiquing and challenging their commodification. However small that scale might be.

The facade of politeness and niceties begins to glitch and disintegrate when Number Four (Jain) breaks away into a furious outburst. Jarringly, a laugh track accompanies it; the more her despair becomes visible, the more relentless the laughter, intertwining to build up into a hysteria. The laugh track and a later revelation about the room’s visibility combines to give an impression of constant, inescapable visibility. It also demolishes any scope for Hollywood’s special brand of voyeurism for its audience.

The women know they are being watched at all times; the suits are shown to watch them at all times (the viewer is thus no longer the sole viewer); when they finally break the fourth wall and acknowledge the viewer, it is as characters who are fully aware of the system and their position in it as visual pleasure.