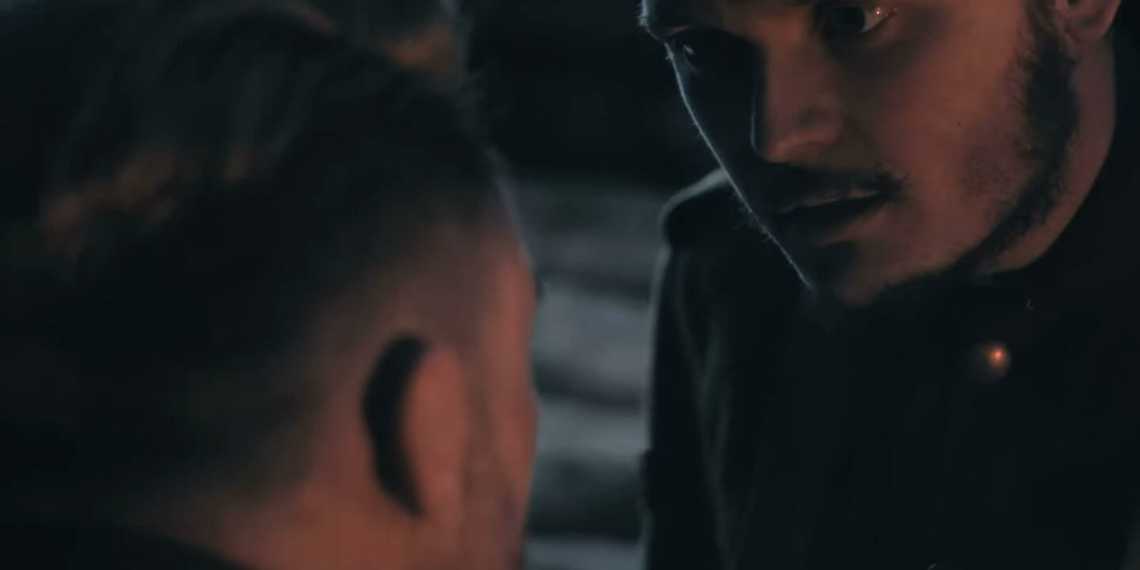 Joseph and Jack Archer’s The Soldier’s Post, their third short, examines how three different men react to the prospect of death in WWI. One with lust for violence, one with yearning for home, and one with fear and suppressed longing.

Waiting for morning and the war it will bring, the three soldiers sit in their cramped trenches with nothing but their worst fears and impulses for company. Henry (Charlie Heptinstall) works like a catalyst on the other two, teasing their emotional turmoil to the surface in the hope of creating conflict. Shot from close quarters, the camera adds to the claustrophobic crampedness of the space, disintegrating any meaningful notion of personal space. The other two are left to react to this invasion of the camera as well as Henry, facing near constant provocation which mingles with their anxieties.

Thomas (Christopher Mulvin) is the more disturbed–and therefore the more vulnerable to Henry’s mind games–having not received any letters from his wife in months. He paces around the room like a caged animal with nothing to distract him. The last soldier, Edward (Luke Hunter) is gay, a fact that Henry pounces on and uses against him. Where Thomas is more upset, it is Edward who is in more danger; Henry threatens to report him. In contrast to both of them, Henry is calm, eager even for the war that awaits them. He lies in bed and plays with a ball.

This near constant aggravation is paused temporarily when Henry steps out for a smoke. Finally left to themselves, Thomas and Edward begin to grapple, inwardly and otherwise, with all that Henry has provoked in them. Thomas struggles to make sense of his wife’s desertion all while being terribly homesick, while Edward is faced with being outed to Thomas. But while Edward’s casual acceptance brings respite, the tension in the room flares up again when a revelation is made.

When Henry returns with his jibes and barbed words, it is to this volatile atmosphere. Tensions boil over, drastic actions are taken, and characters come to threats and manipulation. The flame Henry had been stoking has finally turned into a raging fire.

The Soldier’s Post explores the compounded psychological effects of war and being trapped with destructive people. Henry, Edward and Thomas bring out the worst in each other, and in the process, damn themselves to wounds that likely will not heal anytime soon.