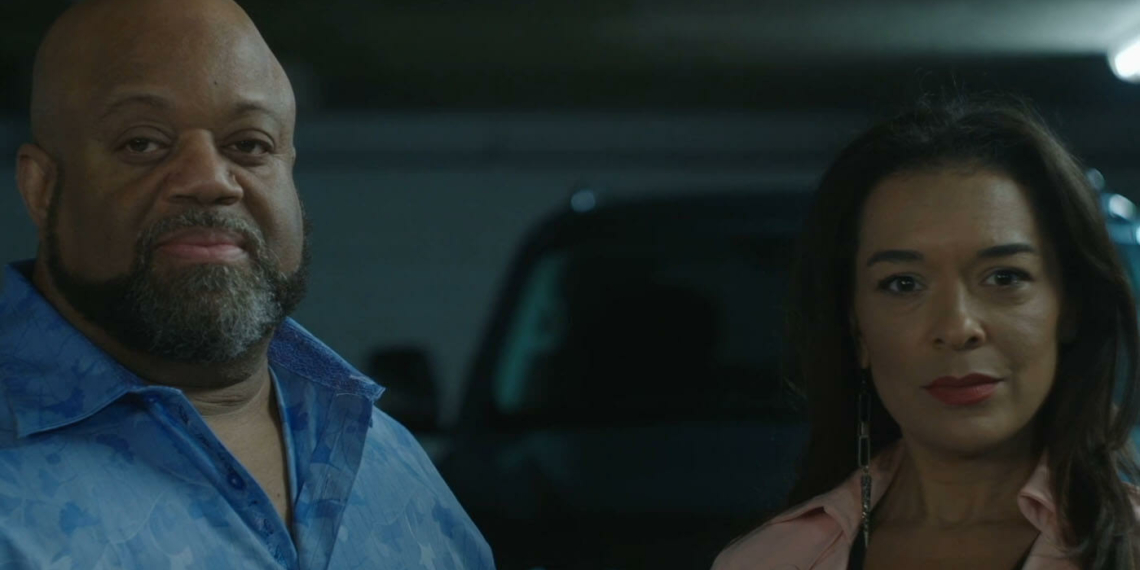 Gerald Webb’s $TACK$ uses the crime thriller form to bring about a surprising twist that is cutting in its satire. A 6-minute film centred on an illegal deal between two rival gangs, $TACK$ maintains the tension well, even in its climactic reveal.

The two parties are to meet in an underground car park. One side (Calvin C. Winbush, Tarnue Massaquoi) waits for the other to arrive. When they (Mark Christopher Lawrence, Jamie Burton-Oare, JaDarrel Belser) do, the meeting remains just shy of a standoff in true crime thriller fashion. The big, burly men and their guns are meant to be threatening, and they succeed. But the true boss is Magdelena (Diahna Nicole Baxter), a femme fatale with all the steely coolness and sharp one-liners that her image demands.

Magdelena is here to take the lucrative goods off Hector’s (Lawrence) hands for an equally lucrative price. The film takes its time drawing out the gravity of the deal. If something goes wrong, a lot could go down the toilet. The narrative uses frequent cuts and a loaded background score to emphasise the taut tension and characters’ distrust of each other. But the quality of the goods is confirmed—China white, 97% pure uncut—and the deal is complete without bloodshed.

It is at this point that the narrative reveals its cards, and using a single shot upends everything the audience had come to believe as true about it.

The satire of it is just shy of outright farce—especially when a second product is introduced as a teaser—the result of the film never relenting on its severe mood. Toeing the line between thriller and satire with a concluding ambiguity that serves to make all the more interesting, $TACK$ alludes to recent events with a critical eye. It asks you to think, what has become lucrative, and why?