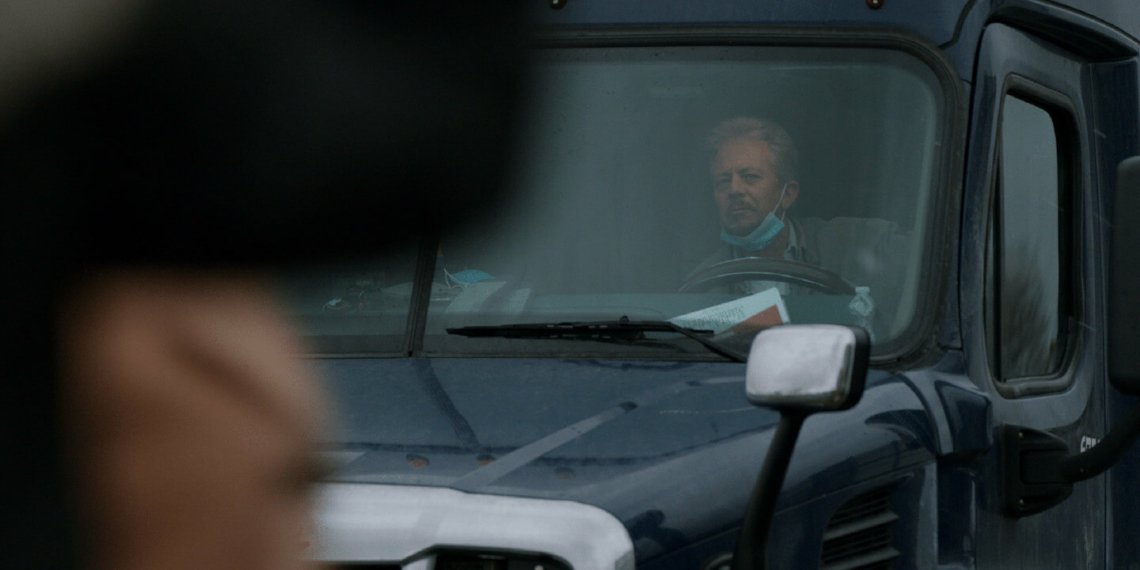 Des Matelske’s Hope En Route (co-written with Jeremy Marshall) is a product of hindsight. Depicting the actions of a truck driver during the pandemic, the film imbues its scenes with precious hindsight which transform innocuous instances into significant moments.

The protagonist is Dan (Daren Matelske), a truck driver and heavy smoker who goes from day to day with an easygoing lightness that casually endears him to others. He has a persistent cough but dismisses it off as the consequence of his smoking. The pandemic is just beginning to bear down on the people. Shipments are beginning to get stalled, hospitals are just beginning to fill up, people like Dan are still lax about wearing masks. It is at this point in time where the world is teetering at the precipice of overwhelming devastation that the film sets its plot, with Dan unwittingly becoming a simultaneous hero and victim.

The film incorporates the spaces around Dan into the narrative such that the failing city becomes integral to it. The trucking industry itself occupies a position of significance through Dan, especially when the warehouse floor is laid out with body bags because the morgues are full, and when Dan decides to make a trip to get a shipping of ventilators. The former is a grim sight: black bags dot the floor in neat rows, while staff in inadequate protective gear manage the warehouse operations. The visual of the bags and the utterance of the word morgues is enough for the viewer to remember the full scope of the pandemic.

Music consists of a mix of American classics and a tense original score. Interestingly, it is the familiar songs that produce the impression of a world going frighteningly awry. Dan continues to treat his symptoms with dismissal until he can no longer ignore them. Unfortunately, it is also when he is no longer able to attend to them.

The title does not refer to Dan’s fate but to his actions. Yet Hope En Route does offer relief by its end, as well as a tribute to the truckers who worked through the pandemic. The film is bittersweet. It remembers what the pandemic meant in all its harsh realities, but also soothes within the extents of the plot.