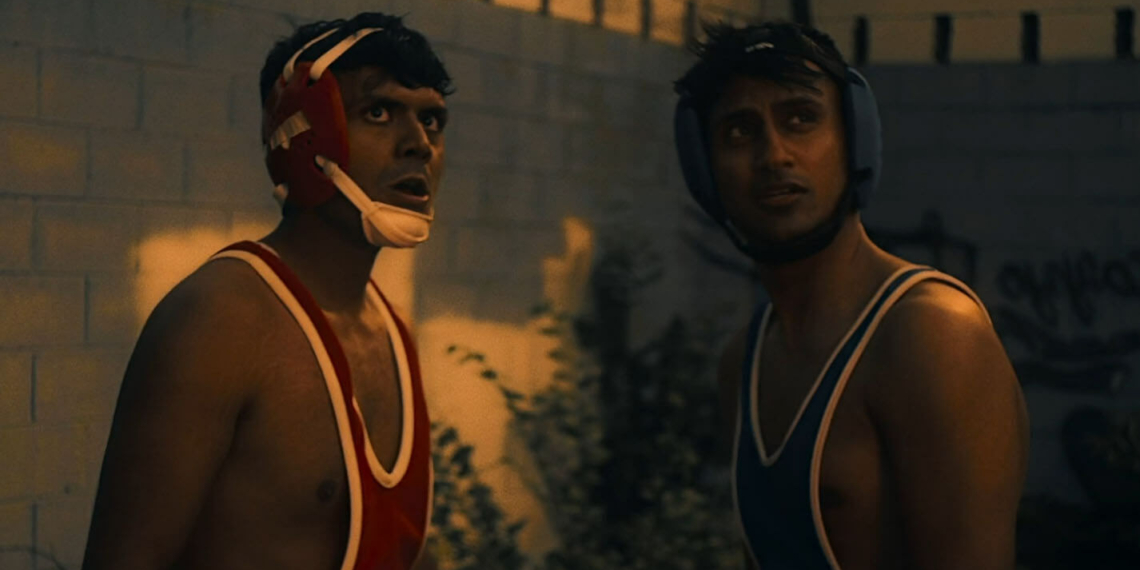 Matthew Manhire’s Flames is a 6-minute film that witnesses self-expression and liberation from despotic control. Two young men take centre stage, enacting the tussle with their draconian grandfather over expectation and desire.

Dialogue is sparsely used. Beyond a brief conversation in the car between the two men (Jabar Bains, Akshat Sharma), they almost do not speak. Entering a fenced off arena to practise wrestling, they prepare in tandem in a well rehearsed routine. The only one to really talk thereafter is their draconian grandfather (Ramesh Sangani), sat on a balcony far enough away to be little more than a tiny figure. Yet his obscenities dominate the soundtrack, in a constant tug of war with the music that emerges every time the men fluidly shift from wrestling to dance. Like in the case of the background score, the old man refuses to relinquish his control over the men. He acts like a coach, one that is not hardly wanted and even less helpful.

The camerawork, like the soundtrack, shifts into hypnotic movement whenever the men switch to dancing. Their rhythm and movement is intimate, keenly felt, and strains as though to burst into verbal articulation.

Freedom comes in a surreal turn in the plot. And as with most cases of liberation, there is fire, smoke and sirens in the distance. But the music takes over for good now, shutting out whatever harsh ugliness the old man’s legacy is capable of perpetuating.

Flames speaks to an intersectional experience of being Asian, immigrant, masculine, and non-conforming in systemic frameworks that do not support and actively oppose challenges to the normative expectations of behaviour or pursuits.