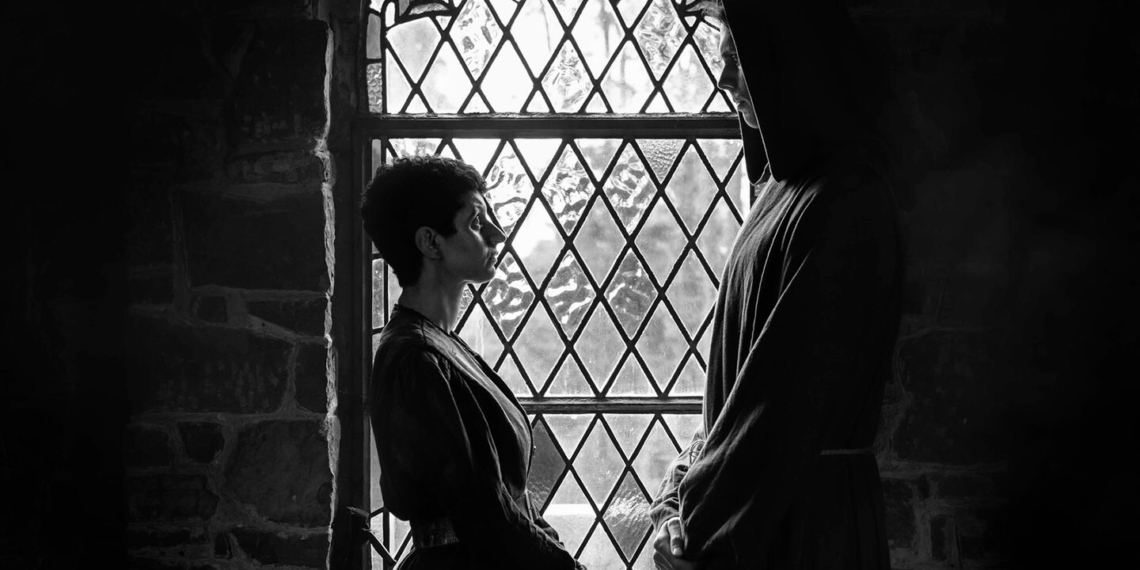 Josh Massarotti’s 12-minute Land of Nod briefly portrays the eve of Joan of Arc’s execution, directly referencing the 1928 The Passion of Joan of Arc. Featuring only Jeanne and one member of the Church, the film takes a more modern approach but does not abandon its roots.

The sole Inquisitor (Reece Mitchell) appears as a representation of the whole, at least in spirit, since he does not attempt to subject Jeanne to physical torture. He carries on otherwise, questioning and attempting to dislodge Jeanne’s (Maia Abbas) conviction in her beliefs. He speaks in English, Jeanne replies in French. The film moves away from a focus on the face. Instead, Mitchell, and especially Abbas, perform with the whole of their bodies. Abbas’ Jeanne is marginally more expressive of her thoughts in turmoil, part of the film’s contemporary approach.

The film is predominantly black and white but for a couple of deviations. Of these the flame of a symbolic candle is notable; the film compares it to Jeanne as she falls and rises in triumph in the course of her interrogation and torture. Arguably, the dancing flame also references the shots of the burning Jeanne in the 1928 film.

Invoking Jeanne’s life as a person within a family rather than a martyr for a greater cause, the film dwells on her personal life. The Inquisitor questions Jeanne relentlessly, but it is of a subtle, superficially restrained kind, especially when he discusses Jeanne’s family and childhood. Less brutally inclined. His methods aim to bring the worth of her sacrifice into question and thereby invalidate it.

Land of Nod attempts to chart its own visual path beyond its source, and it shows in its opening and closing shots. They carry a profundity that bookends the film with a heaviness that reminds the viewer of, but does not subject them to, all the harshness of the story. There is great sorrow but no crippling emotional drain.