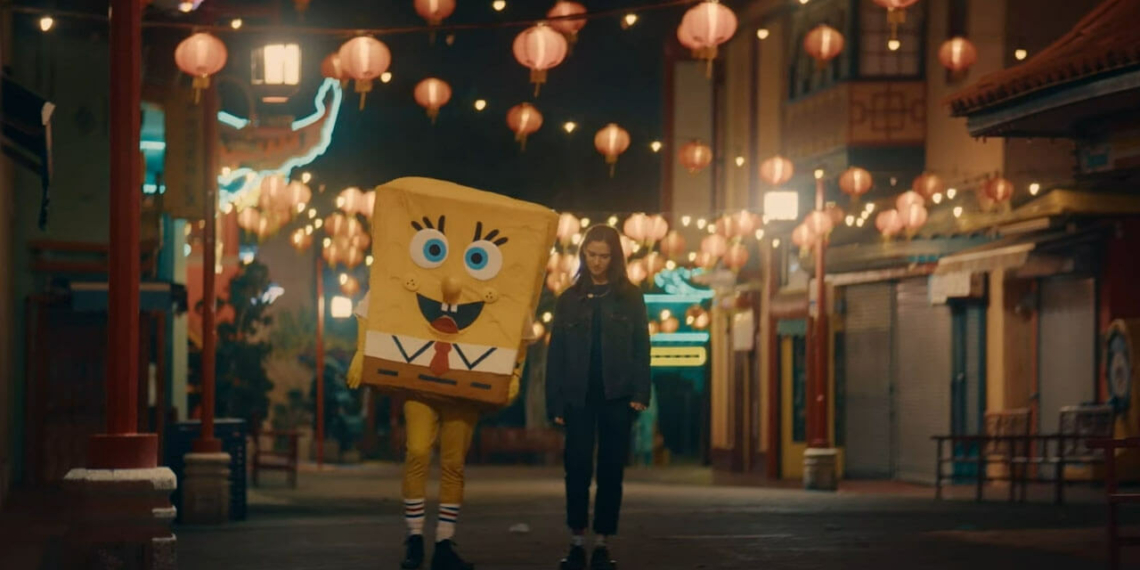 With the 18-minute film Bob, written by Dan Brier, director Drew Bierut makes a sweetly peculiar comedy that does not immediately reveal its cards. The uncertainty of what could happen keeps the audience and the characters, if not entirely on the edge of their seats, then certainly a moderate amount cautious.

On the surface of things, it is funny when Hannah (Emma Pasarow) turns up at her sister’s dinner party with a man (Dillon J. Stücky) in a SpongeBob costume after running into him on the way to said dinner party. She knows nothing about him, and therefore, neither does Julia (Talia Rose Goodman) nor her husband, Grant (Michael Bonini). The first few minutes lay admirable groundwork for the characters. Hannah, of course, does things on impulse, only to see how things play out. Julia works in corporate real estate, says things like “the crusty part of Hollywood” and calls the cops on a guest. That last bit happens soon after they sit down to eat, a party of five: Hannah, Bob, Julia, Grant and Daniel (Hugo Mejia), who Julia has secretly set up her sister with. Daniel and Grant are everyday characters, watching from the sidelines. Bob is unpredictable.

The equations are tense and run in multiple directions. Prime fodder for explosions, comic or otherwise. Julia and Hannah’s dynamic is arguably the most amusing, especially since Hannah cannot stop laughing at her latest activity and her sister’s reaction to it. The audience cannot help but be at least partially endeared to her and laugh along.

What particularly works for the film is that none of the characters is particularly in the right. The question is who will cross the line and how. For a minute it appears to be Bob himself. He acts unexpectedly jealous over Hannah, enters Julia and Grant’s bedroom, and plays Grant’s piano. It is at this point that the cops arrive and escort him out. Julia thus becomes the one to cross the line.

That there are biases at play is obvious. Julia who does not like the crusty part of Hollywood would certainly not like a man who seemingly puts on a cartoon costume as his day job. The film goes on to tease many of the viewers’ own implicit biases with its final reveal. The last few minutes of the film bring its unpredictability to rest and leave the audience delightfully uneasy at the many small twists and turns of the story.

Indeed, Bob is not a film that attempts to touch on the grand scheme of things. The shifts are minute; subtle changes that leave the viewer in the company of Daniel and Grant, cautious on the sidelines and anticipating a disaster that was never coming.