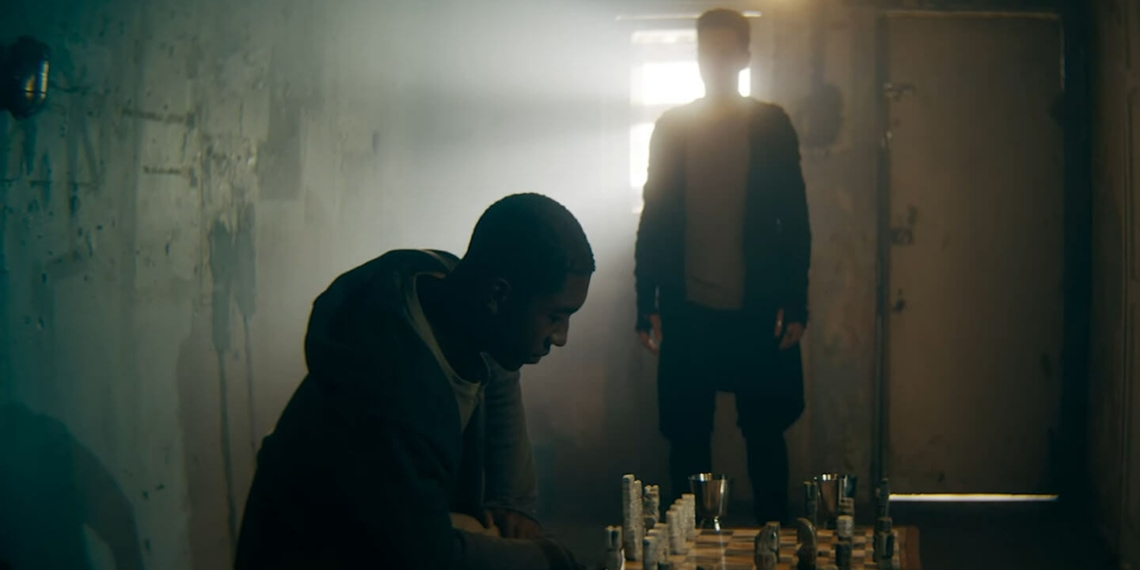 Piotr Szkopiak’s Two Knights is a dark-toned story of anger, questioning righteousness, morality, and the bounds of religion and duty. At its centre are Lucifer and Archangel Michael, whom Lucifer has invited for a game of chess.

The writing credits are shared between Reece J. Morant, Adrian Darko and Tommaso Genovesi. The two characters may be compared to Good Omens’ Aziraphale and Crowley–the millennia-old history and romance are certainly there–but Two Knights is heavier, and there is little tenderness to be found here. Lucifer (Darko) is angry at the way the world has been allowed to run into decadence and dereliction; Michael (Morant) maintains that God is beyond criticism or reproach. Lucifer’s anger carries in it the weight of the thousands of years of injustice, but Michael remains upright and inflexible. When Lucifer brings up his own personal wounds, they are met with the same inflexibility and unwillingness.

They are out in the middle of the sea, occupying one of seven standing structures. All of this plays out intermittently, punctuated by a few location changes and their game. Even so, the mood is always one of simmering tensions, easily bleeding into their game. Lucifer mirrors Michael’s moves, an action that is simultaneously a deliberate challenge (to something other than the game) and a clear indication that none of this is about the game.

Lucifer initially makes light talk, his bitterness thinly veiled, and cuts a more interesting figure than Michael. But Michael’s intent denial of everything from the responsibility of injustice to their abandoned relationship is compelling ground, ideal for digging. When their anger at each other boils to a clash, a parting of the ways is once again deemed necessary.

Two Knights pairs ideas of injustice and religion. But when the two are left solitary and staring into the vague distance where the other is, the film solidifies its equal investment in heartbreak and lovers’ resentment that have spanned more years than civilizations have withstood time.