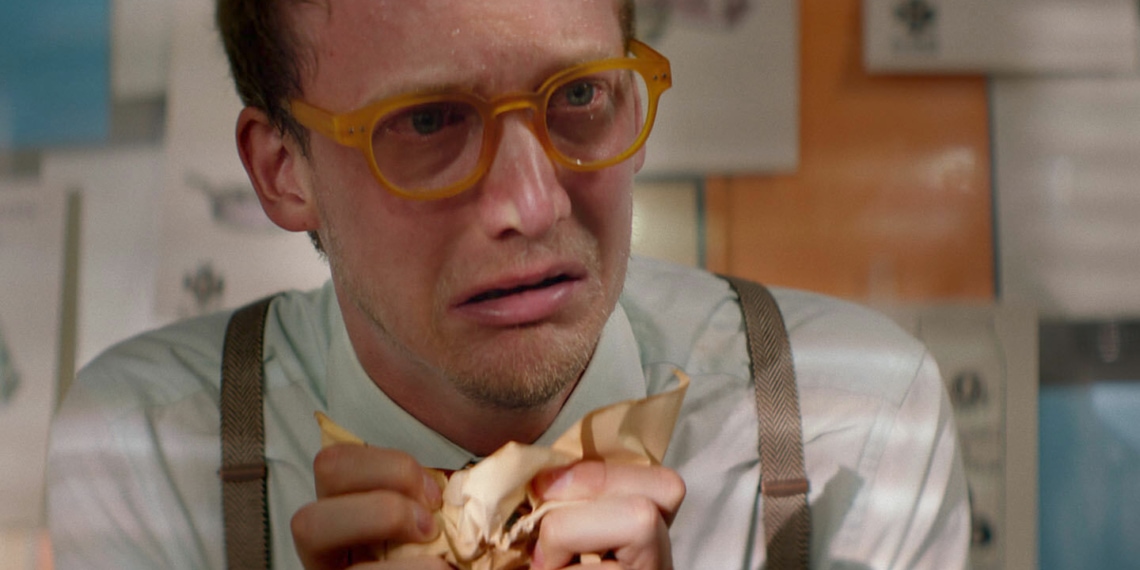 Mannen som inte ville gråta (The Man Who Wouldn’t Cry) is a comedy that serves as a guise beneath which it distils the very real tendencies of the world. Satirizing the way companies function, the 16-minute film is based on a Stig Dagerman short story, written by Björn Boström and directed by Emil T. Jonsson.

Beginning with the death of a beloved actress, the film opens on the waves of reaction at an ad agency. With animation, the film pares down the sequence down to the bare melodrama it is. No one is exempt from grieving, which spells trouble for Martin (Jonas Nilsson), who does not share in, nor understand, the severity of everyone’s reactions.

When this results in a talking-to from his boss (Sissela Kyle), the scene drips with that sickening mawkishness that hides some form of rot behind it. Everything is brightly lit here, everyone appears to be transparently expressive. The situation is what is commonly termed ‘a big family’; there is no longer an employee of the month, replaced by a buddy of the month. You are not a salaried employee, you are a child, part of a family. The employees’ time and psyche belong to the company, thus the flagging when it came to Martin.

Martin is sent down to the archives, to be monitored by a camera as well as the latest buddy of the month, Jockum (Christoffer Nordenrot) until he cries for the death of the beloved actress, Henrietta. The colour palette continues to be bright and cheerful, continually highlighting its unnaturalness–its function to remind everyone that this is supposed to be a happy place, filled with happy family members uniform in every feeling, every thought, every action.

In the archives room, just as the plot doubles down on Martin, the film doubles down on its critique of capitalism, especially in the era of social media. The satire threatens to break down into pure pathos as Jockum despairs over what it will cost him to replace his broken glasses. The exultation and devotion required of employees towards the company are pinned down in a single line, “The promised pay raise never happens, even though I’m Buddy of the Month and everything.” The element of the religious makes a jarring and significant statement about the farcical and exploitative systems of companies.

The ending rounds it all off with the role of social media in all its neverending stream of input, however unnecessary, meaningless or inaccurate that output may be. Martin’s tears had a good reason to arrive. The wonder is if it will stop having those reasons anytime soon. Will we?