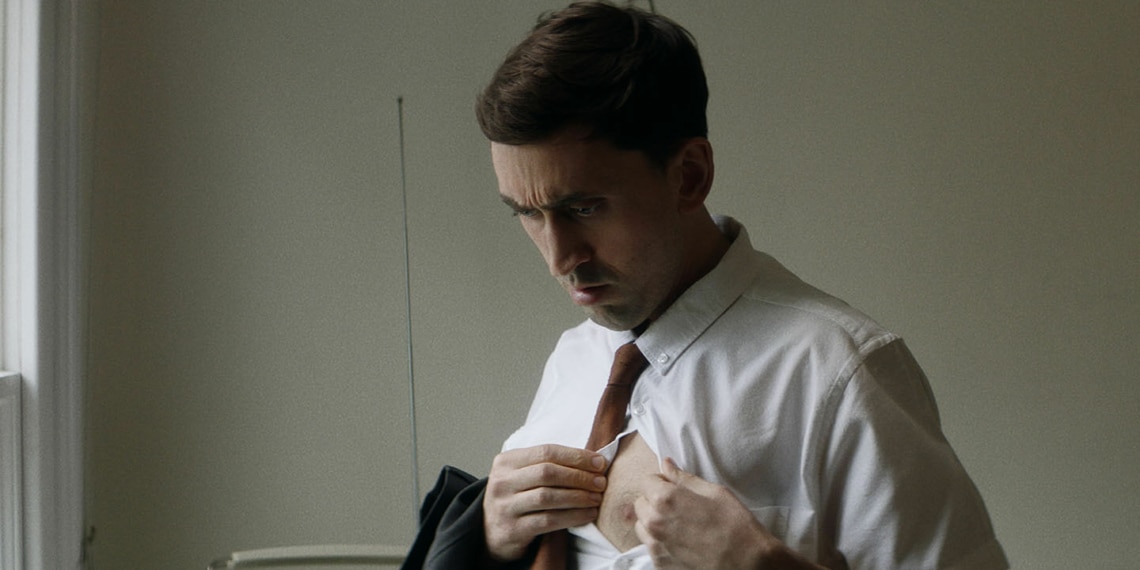 Bailey Tom Bailey’s The History of Nipples has taken one man’s existential crisis caused by his nipples and turned it into a horror-comedy that is as fun as it is sincerely horrifying without going overboard. This, despite graphic self-mutilation (the trick that the film uses is to present it without loud dramatisation).

Ron Burt (Joseph Mcnab) leads a quiet, unremarkable life, with his half-sleeve shirt and tie, his nondescript haircut, and his unassuming mannerisms. His existential crisis adopts this external personality: his internal life is shaken while no one else seems to take particular notice. The film’s emphasis on this largely forms its comic tone. Ron’s mind quakes with questions of his nipples’ purpose or redundancy while all that the world sees is a man with a mildly pained expression on his face. His girlfriend (Lily Wood) too, discounts his life-changing paradigm shift. The world goes on for everyone else whilst an obscure part of history is uncovered for Ron and leaves everything nipple related up for question.

Besides milking the external presentation of Ron’s crisis for all its humorous worth, the film’s other half of comedy is derived from the explicit illustration of his inner upheaval. Suddenly, nipples are everywhere. He examines his own, he thinks about others, extending all the way back to historical kings whose nipples were thought to be responsible for the tides of the kingdom’s fortunes. The shock value of (both intact and mutilated) an abundance of nipples on-screen is juxtaposed with that aforementioned external mundanity until they blend into a reality of horror. Indeed, this is specifically underlined with the blood that begins staining Ron’s now unbuttoned half-sleeve shirt with alarming rapidity. The climax leaves the viewer with a delicious mix of lightheadedness, bewilderment and utter amusement.

The History of Nipples relies on restrained filmmaking to unite graphic horror with the brand of dry British humour that is palpable in the very air within the film’s world. Even the resolution is a return to Ron’s everydayness, only this time around, there is a sense of liberation infused in it.