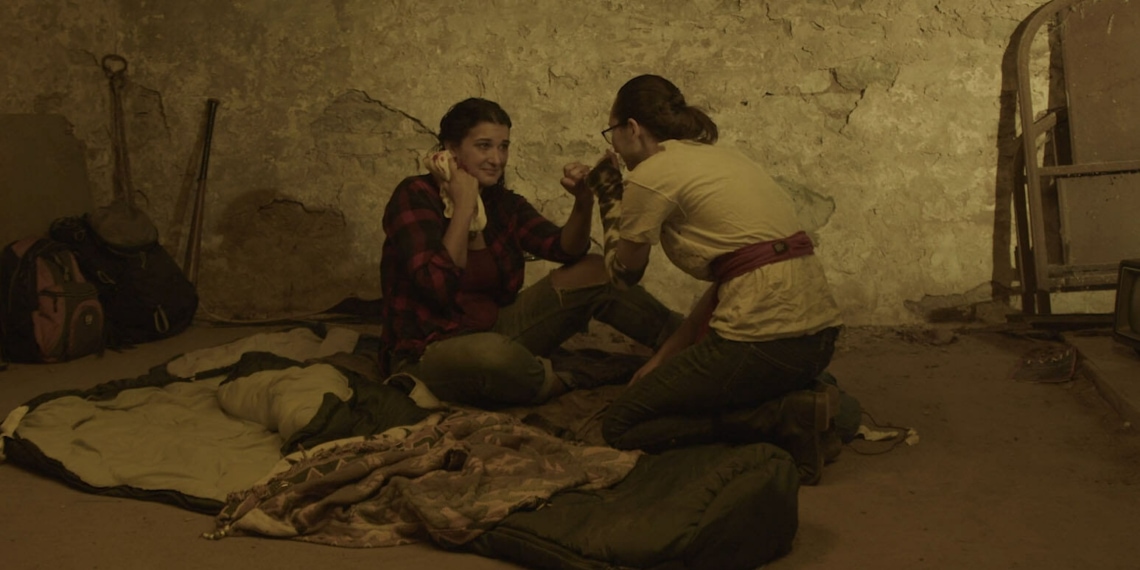 A film made in a mere 48 hours as part of a filmmaking challenge, Hazel’s Eyes is a surprisingly taut apocalypse thriller. Directed by Jesse McAnally, the film witnesses a couple’s struggle against time and death, and examines something of love in the process.

Hazel (Hannah Hendrix) has been bitten by something, presumably a zombie. Her wife, Sophie (Miranda Moffat) has about 90 minutes to find a cure. The film is aware of the long history of zombies and apocalypses behind it, and thus moves away from providing a backstory that the audience is likely already familiar with. Instead, in eight minutes, it chooses a slightly different and considerably more interesting path.

Forced to shelter in a basement, there is little here to distract them from the looming tragedy. An old TV, bedding on the floor, a lantern. They watch their wedding on the static-filled TV. There is no other way; either Hazel gets the cure or Sophie will lose her wife. When their last hope—a man (Taylor Hitson) who had promised to find them a cure in exchange for all their supplies—cruelly betrays them, all seems lost. Sophie fights the best she can, but the man, Eric, has as good as ensured their end. Inevitably, the clock runs out.

The film pulls two twists, one that gives it its winning suspense, and the other which allows the film a grubby, bloody and entirely satisfying (happy) ending. For this, the film must be lauded. It took a tired subgenre and put a refreshing spin on it, and even made room for a moment of humour. A considerable achievement in 48 hours.