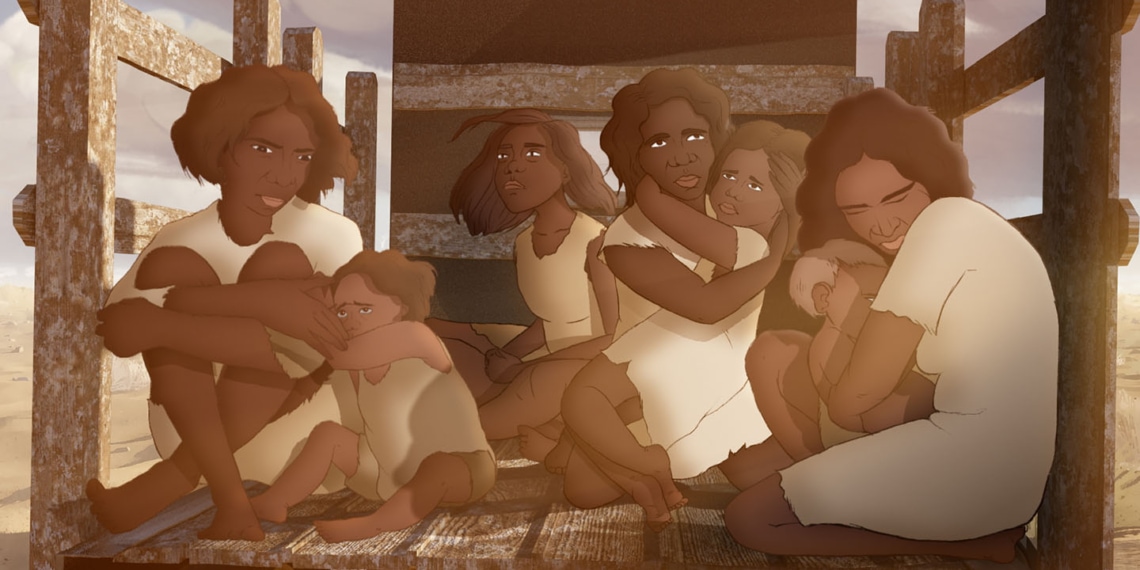 Nicholas Tory’s animated short Lifeblood pays tribute to Bourke shire, a New South Wales town with centuries of Aboriginal history. Set against the backdrop of the Darling River, the landscape contains stories upon stories, layered and overlapping, an intricate ecosystem that is governed by each element of the land.

The 19-minute film—written in collaboration between Aboriginal elder Aunty Dot Martin, Phil Sullivan, Jonathan Nix, and Tory—is narrated in voiceover by Nardi Simpson. The characters do not speak for the benefit of the audience; they are part of the story by being distanced from the spectator. What we learn about them and about the land comes through a mediator, as though demanding that one maintain a respectful distance.

Two forces act on the land. A guardian god who prowls the land and the river snaking through it. The Baaka river (Barkindji for the Darling river) is a she, a life force. With rains, the river is renewed after droughts. And with it, the land comes to life too. Versatile in its (imaginative) kinetics, the film moves mirroring the movement of the river. A fluid, live thing, the land within the frame is always teeming with life. Even in the desert landscape with its shimmering haze, there is constant movement, from the flies and the ants to the scanty growth.

Though water is scarce, and growth all around may seem stunted, there is movement, and with movement, change. Over and over, the film draws attention to this constant state of land being in flux. The sound design is a delight, contributing significantly to the immersive atmosphere of the film.

The uncommonly wide aspect ratio highlights subjective vision as well as a certain autonomy of the landscape. It seems to suggest that the landscape exists well outside the frame, while the scope of the frame is akin to a view through binoculars.

The landscape’s changing faces are contrasted. What was once only home began to be more things, a trade route, a river port. The cars winding down the road (like the river used to) in the present day might carry an unchained aboriginal woman with her family where, in the not so distant past, they were forcibly displaced by the missionaries. The silent grief has transformed into melancholia that has settled into the people’s bloodstreams.

The woman’s coming home brings the story to rest. Food, music, stories and community take quiet position, the reunion an opportunity to reconnect with the land as well as the people. Two of them move away from the people to sit under the night sky. Sitting there, they gaze up at the god in the sky. He could be a figure of terror, but there is so much more. He is made of the same stuff as the earth, sharing its delicate, elegant nature: vast, frightening, balanced, benevolent. And reliant on the river for his existence.