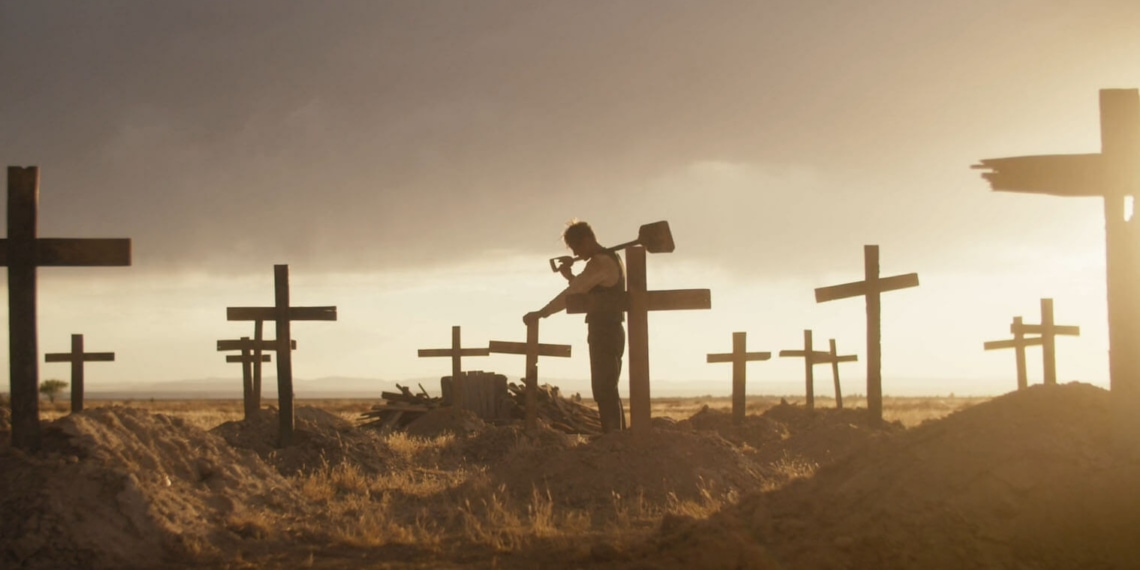 Having now seen Andy Kastelic’s The Misanthrope, one wonders what else could describe grief as well as the destruction of flowers. The film, all of fifteen minutes, thrusts upon the viewer a heart-wrenching story of widespread, ceaseless loss. And just as it is gutting, it leaves the viewer with the grace of warmth.

The protagonist is Jeb (Kastelic), wasting away in an arid landscape. The relentless dusty wind seems to sweep away at his life while he digs grave after grave. His town has been ravaged by an illness. People do not stop dying, not even when his own wife is taken from him. The soil continues to be carried away by the wind. It is a picture of fast draining life. Though struck by his own personal loss, he continues to dig the graves. Only now, he has cast aside warmth and kindness, and proclaiming himself a figure of authority, he bans flowers. No flowers must be left at graves, no flowers must be grown. He orders them to be burnt.

The monologues in the film are poetic, the rhythm exquisite in combination with the cinematography and score. The landscape is an inextricable part of the narrative, an unforgiving thing that lays drying and corroding. Jeb wars with it, steeping in his own rage. As he is layered more and more in the hue of the land, the other townspeople (Nancy Jeris, Andrew Olson, Trine Christensen, and William Sterchi) form a distinct contrast to him. They too have suffered loss, but they come with arms full of flowers, clean, because Jeb has taken on the burden of burying their dead. Roses, dahlias, tulips and sunflowers are laid at the graves of loved ones. The eulogies are filled with sorrow and love. It is as though Jeb has also taken on their anger at undeserved loss.

When his wife, Kitty (Sarah Minnich) comes on screen, Jeb’s harshness gives way to desperation, as he struggles to keep her alive. As he feeds her flower after flower, the unnaturalness of death to loved ones becomes painfully clear. The only sign of greenery and life in the film is a flashback of when Jeb and Kitty first met in a forest of aspens. Not a mote of dust in sight, Jeb practically shines, an unscarred being.

In reality, Jeb eventually finds solace in the embrace of his community. The obvious connotations of the pandemic makes it doubly powerful. Besides its breathtaking cinematic beauty, this is a film that could very well be a source of comfort and resonance for the bereaved.