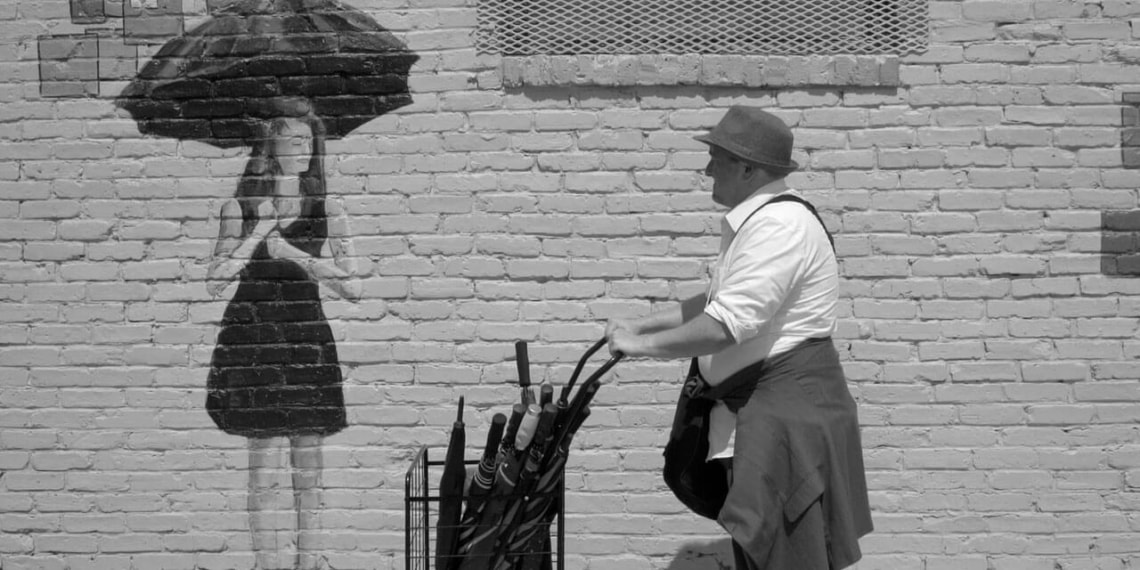 Steve Herold’s 17-minute comedy Death of an Umbrella Salesman (co-written with James L. Palmer) chronicles a day in the life of a struggling umbrella salesman who saves a couple of lives and comes close to his own end. Sadness, of course, begets humour.

With the very first few cuts, the film demonstrates its merit. That it understands timing and delivery is evident in the editing and Kevin Kolack’s performance. Kolack plays the impoverished salesman, Stanley Grimp. There is an escapable sorrow to his story, with the hunger, misery, and constant rejection. The only way to not drown in it is as the film does: to turn it into a comedy.

Its craft is laudable. The standout sound design and score create a delightful mix of sympathy and humour. The use of long shots reveals the character in relation to his environment and by highlighting his smallness against the latter, shows the Sisyphean impossibility of his tasks. Which are to sell an umbrella, pay his alimony, and maybe have enough money for a meal. The film efficiently draws a picture of a tired man down on his luck in the first minute.

It gets progressively worse. A man quite literally beats him to the chase, pushing him to the ground to get ahead. The result is hilariously sad. Online shopping drops its own blow. Everywhere he goes, the world seems to have arranged itself to be able to mock him every few steps. He grows increasingly haggard. The suited-up man is brought down to rolled-up sleeves, hiked-up pants, heaving breaths, a minute from death.

When he finally finds himself a customer, another failure threatens to swallow him. The woman, Ms Besty May Morgan (Sabrina Gennarino) will only buy an umbrella from him if it comes in peach—which he does not have. The irony of a colour preference in a film swathed in greyscale is not lost on the viewer and becomes yet another gag piling on top of the many layers the film already lavishes on its audience.

Death of an Umbrella Salesman takes the tragedies of a working-class man and manages to coax the humour out of it without punching down. Instead, it highlights the meaninglessness of the jobs we squeeze ourselves dry over just to put food on the table.