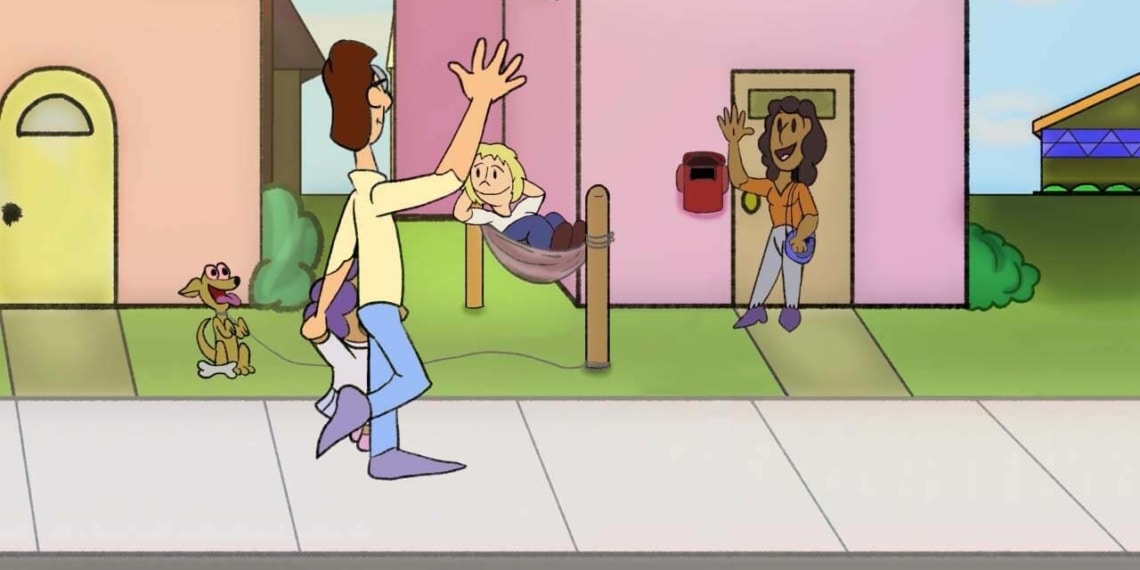 Eli Copperman’s 5-minute dramedy, The Trail Beyond Highland Road takes pains to keep its tale simple. Drawn in a child’s hand, the animated short looks through the eyes of a little girl and her father at the plight of wildlife without food and habitat.

The whole of the ecosystem in a razed down forest next to a suburb is represented by deer, a herd of which have entered the town in search of food. The story opens in a little girl’s front yard, where her father keeps a vegetable garden. There is a cutesy, comedic tone to the duo and the way they interact with the world around them. Although the characters are vocalised, they do not have dialogues, communicating instead through expressions and every so often, exaggerated movements. When the father realizes the danger that the deer pose to his beloved carrots, he races back home, daughter flying in tow.

The sight that greets them elicits two contrasting reactions. While the father rages over his ruined carrots, the daughter is overjoyed at the sight of the deer. Their differing views on the situation is humorous and endearing, while leaving room to consider the deer themselves. Indeed, the focus is soon pulled in their direction when the daughter realizes that one is being chased by a dog. Heart full of compassion and empathy, she runs after them to protect the deer, unconcerned or unaware of her diminutive size and strength. This sets the climax into motion, ending in a heartwarming conclusion.

Although the scope of the film does not cover the actual systemic problems at play, The Trail Beyond Highland Road is a feel-good film, fitting individual despair with individual action and consequent warmth. Watching the father-daughter duo nurture a wasteland back to health and keep it that way for years together is the kind of soothing comfort that settles in well when one is faced with wide scale despair as the world currently is.