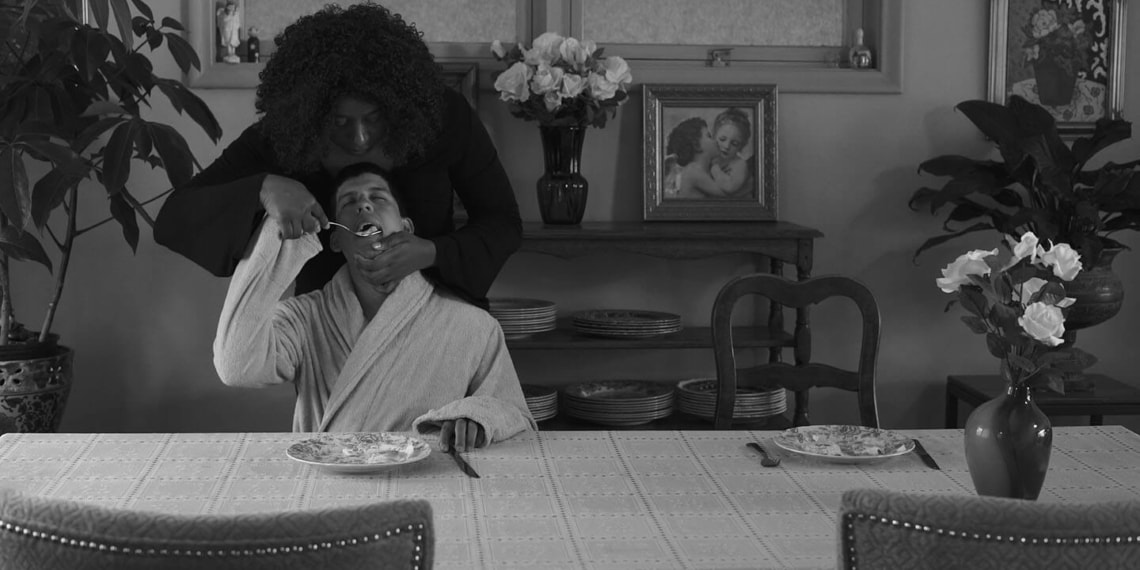 Replete with religious imagery, David Matthew Johnson’s Ode to the Whale of Christ is a 30-minute experiment in silence. Bleached of sound and colour, it makes for 30 uncomfortable minutes with nothing but a woman’s lonely struggle in a house empty but for her male companion, who does not move nor speak.

The silence is unbearable for its intensity. There is no white noise, much less music. Jasmyne Johnson plays She, relegated to caring for He (Harleigh McCullum) from bathing and feeding him to actually carrying him around the house over her shoulder. It is a painful process to watch. Soon enough, she is limping after having already struggled with a bad back.

The imagery and camerawork is usually striking, taking inspiration from religious art. The bareness of it all is hard to erase. In place of dialogue, intertitles populate the film. Their style and usage is rather unconventional. She talks to her unmoving, ‘indifferent’ companion, receiving only silence in reply. When there is someone to talk to, it is not him. The exchanges get increasingly uncomfortable.

Her own deteriorating health, failing body is one of the most disturbing aspects of the film. The viewer is forced to watch her figuratively (and sometimes literally) break her body to care for He, in a daily routine which she treats like a ritual. The relentlessness of a single line, ‘He appears indifferent’ assaults the viewer repeatedly, representing the cruelty of hope that She carries. Like his body that she carries and cares for, this hope is something she is unwilling to give up.

Ode to the Whale of Christ, minus its explicit religious symbolism, is also an account of everyday human toil, the kind fated to simultaneous perseverance and utter absence of reward. The mercilessness which She subjects herself to is easily a representation of self-harm masked as service. Her care in the absence of his response is easily an account of historical emotional and physical labour in empty marriages.

A deeply uncomfortable film which was never intended to be enjoyed, Ode to the Whale of Christ demands presence, and sensory suffering, a reflection of her suffering.

Watch Ode to the Whale of Christ Short Film Trailer

Mother in the Mist: The Sting Of Sorrow Amidst Disaster

Mother in the Mist: The Sting Of Sorrow Amidst Disaster