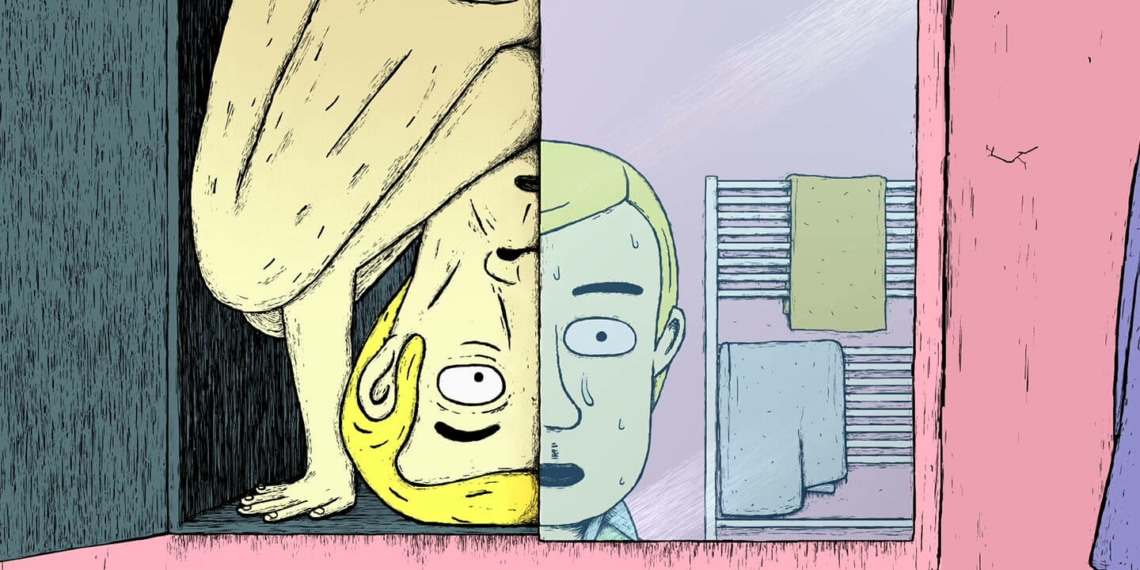 Osman Cerfon’s animated Je Sors Acheter Des Cigarettes (I’m Going Out For Cigarettes) is beguilingly simple. A 12 year-old boy passing his days with cola and games, his mother and sister around him, but never intrusive and never too close.

Jonathan (Thėo Van de Voorde) knows them, and perhaps they know each other in the same way, through their possessions, and odds and ends lying around the house. There are no pictures of his father in the house—at least, nothing to identify him. The door to his mother’s (Delphine Rollin) room is always locked. His sister (Manon Bresch) leads a secret life of her own: typical for her age, but hidden nonetheless. And there are men everywhere, like cockroaches inhabiting the nooks and crannies, they inhabit drawers and cabinets. They do not speak but in grunts, and they do not seem to speak to anyone other than Jonathan. You are supposed to go along with this and accept it as part of the décor and daily business of the household; everyone else certainly seems to.

Indeed, everything in this household is as normal and everyday as one could imagine. The writing ensures that it continues that way. Even its tipping points do not make a fuss. Like the strange, identical men who come out of their nooks and crannies at night to clean the place without being told, life goes on quietly in this family. The only evidence of change is in the details. A clean or cluttered room. A locked drawer. Photos without faces. Around Jonathan, his sister and mother go through rich, detailed lives; his coming-of-age is signified by him beginning to become equally complex. The quiet evidence? A clean room, one he cleans himself.

Of course, the complexity was always there. The film does not pretend otherwise. His coming-of-age has more to do with becoming fully aware and part of the microcosm around him, as opposed to existing in and around it. The simplicity he and the audience are initially presented with are mere fronts to look through. There are rooms of stories behind.