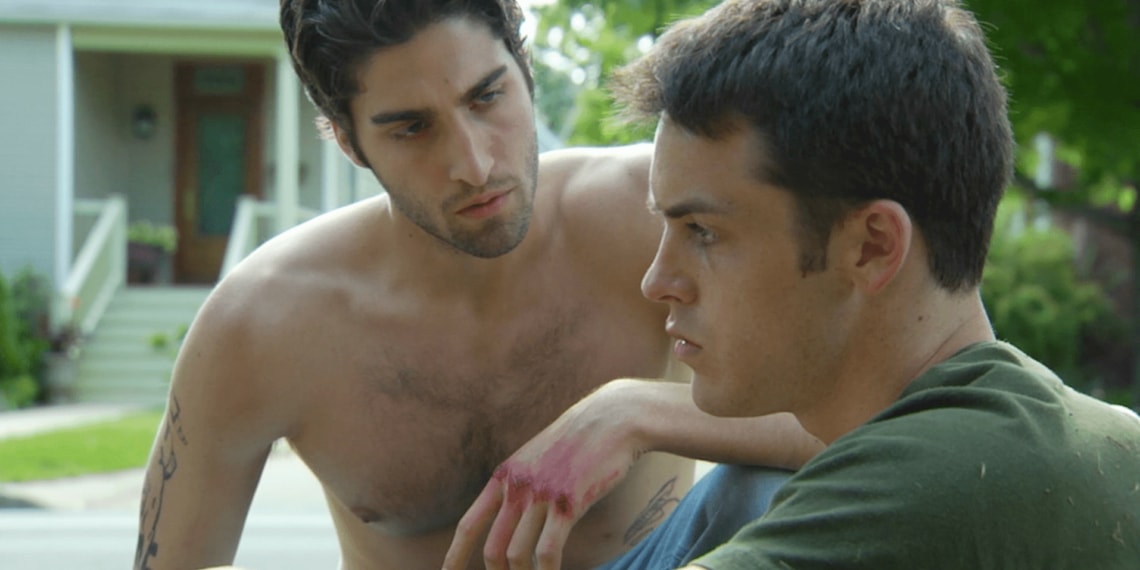 The first view we have of Jesse, the titular character of Josef Steiff’s Jesse James, he is lying on the grass in his front lawn, a purpling, bloody bruise on his brow, dead look in his eyes. It is incomplete odds with the background score, a light, country piece. Clothes lie strewn around him. The clues begin to shape up into reality.

His partner, Mike (Joey Bicicchi), does not make an appearance right away, yet it is clear what Jesse’s wounds mean. The casting must be lauded, because Mike does not look like he could beat and manipulate his partner. Because abusers rarely do. Yet, after his more affectionate persuasion does not manage to get a response out of Jesse, he begins to goad and provoke him. Spike Mayer, as Jesse, is guttingly natural.

Characters function in sets of two here. There is Jesse and Mike. The front door neighbours, Amber (Grace McPhillips) and her little son, Scott (Matthew Gold). And the two officers, Juarez (Eddie Huchro) and McCoy (Santosha Chantal). Scott’s relationship with Jesse is one of the warmer aspects of the film. Truly, it provides bittersweet moments of softness when they are most needed. In direct contrast, Mike is a gigantic, menacing presence; although he maintains distance from Jesse, he is more of a predator circling its prey than someone respecting personal space and boundaries.

A baseball goes through Jesse’s car, shattering one of the windows. Before the bat can follow suit, the cops arrive, thanks to Amber. From their words, it becomes clear this is not the first time they have been called, and they already know Jesse is not going to press charges. The implications about Jesse and his history with his abusive partner are heartbreaking, and true to the reality of victims of abuse. Whether it is the way Jesse lies in the grass, almost catatonic, as though wishing to stop existing, or the way he breaks down in the car near the end, it is realistic and resonant.

Indeed, if the film gets one thing right, it is its portrayal of those at the receiving end of domestic and relationship abuse. Though it comes with a dramatic resolution, the film is of a quieter nature, focusing more on Jesse’s internal struggle with what has been happening, and the crucial juncture he now finds himself at. What happens next depends on whether he can shake loose the insidious claws of a predator.