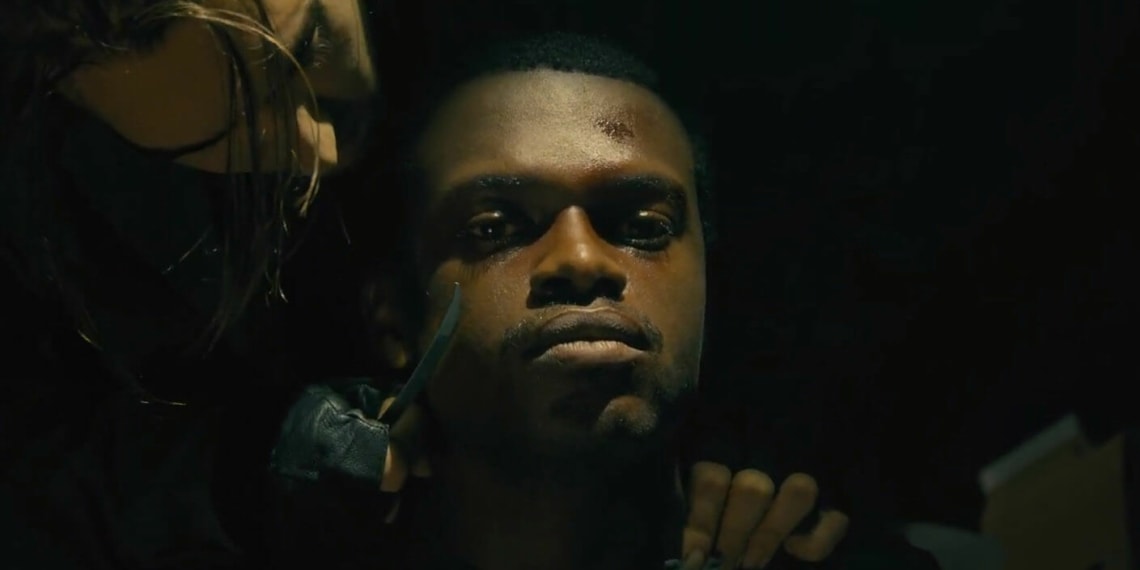 Depicting the interrogation of a prisoner, Jay Bhatti’s The Talk is gritty. Specifically, an agent, taken prisoner by human traffickers. His interrogator? A former agent turned prisoner turned defector. Facing the current prisoner is a choice: talk willingly, or be broken into submission.

David Omordia plays the prisoner. After yet another shower of blows, he is sat in front of the defector and interrogator (Dan Furlonger), who begins his intimidation spiel. And fascinatingly, it does feel little better than a spiel, because even in his battered state, the prisoner repeatedly and successfully takes charge of the conversation. With only these two to carry the plot forward, the shifting power dynamics create the necessary interest to keep it feeling buoyant. A third character, the guard (Stephen Lee), is present mostly to deal the blows and general physical and mental torture.

When the prisoner takes charge, the defector sits there, spilling his own story of how he came to be here, and frequently, a desperation in his voice betrays the cool, brutal facade he prefers to be seen for. Every time he states to the prisoner, No one will come save you, it is a cry born of hidden grief at no one having come to save him. The subtext gives much-needed texture to the story.

The violence is fairly digestible, making the film open to the more squeamish sections of the audience. In fact, the film benefits more from its threats and implications of violence than the actual acts. The opening shot, for example, shows the roughed up prisoner down on the ground, the shadow of a slow-moving fan flitting across his face. The lighting, blue-green colour scheme, and high-angle shot transforms this innocuous thing into something that is far more unsettling, the threat of violence prowling off-screen.

With its limited scope and despite the conventional form, The Talk manages to be interesting. The prisoner’s choice brings the conclusion of the film, and given the non-options he has on his hands, the aftermath can only be bleak, painful, and doomed.