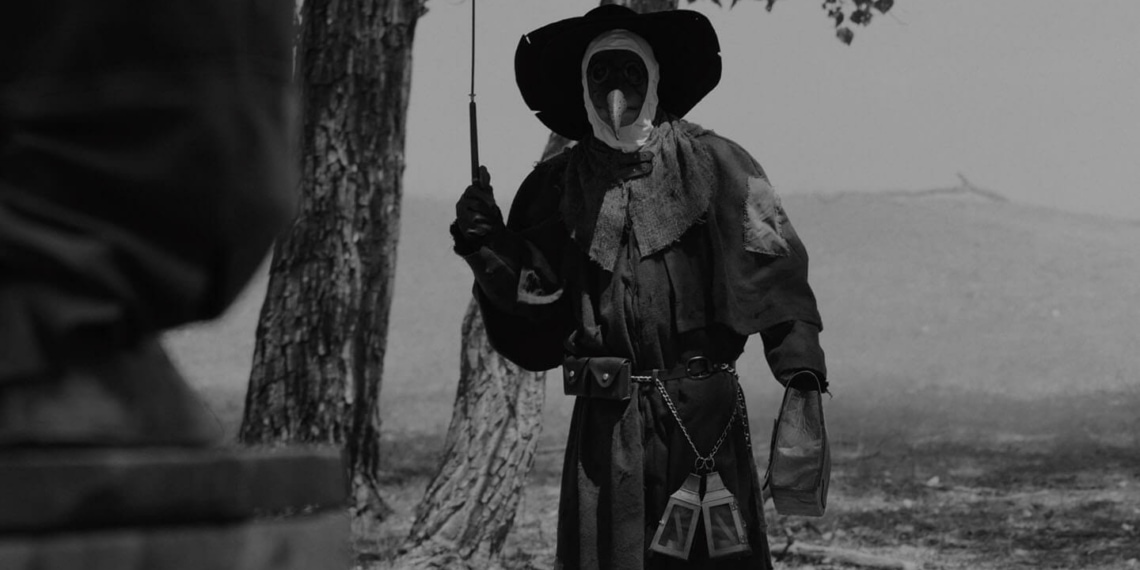 If they had to argue, the two characters of Richard Corso’s satire, Picnic Under A Gibbet (adapted by Rebecca Gorman O’Neill from Gregory Ferbrache’s short story) would probably agree—though they prefer to be on opposite sides on most other subjects—that picnicking under an old, rotting corpse was just the cherry on top of a darkly amusing tale. And thus a fool and a jester picnic under the shrivelled corpse of their king, illness ravaging their kingdom in the meantime.

Heavy on long-winded, zany dialogue, the 17-minute film uses striking imagery, a black and white colour palette, and a 4:3 aspect ratio to set the tone of the story. Of course, the decomposing royal corpse hanging in a gibbet right above the characters’ heads does add something to the atmosphere. Makeup gives the jester (Sean Michael Cummings) and the fool (Cody Dermon) mean faces, which the actors justify with their performances. Harmless though they are supposed to be and joke though they might, it does not take long for the film to hint that they are not to be trusted.

Movement limited to their checkered picnic blanket, they are soon joined by the final character, the plague doctor (Leonard Barrett Jr.). He brings a possible cure for the plague, requesting an audience with the king. More zany dialogue ensues, the gist of it is merely that no, he may not have an audience with the king, and no, he may not put his knowledge to use, the damned outsider. The parallels are inescapable, the satire biting. All this is the work of the jester, who has, over the course of the story, subtly established himself as the leader of the duo. Then when opportunity presents itself, he also becomes the new de facto king. The doctor is condemned.

Terry Burnsed’s voice-over and Greth Ligon’s score are excellent additions, emphasising the era of the story. Juxtaposed against this, with smoke (or perhaps fog?) swirling in and out of the frame, the fool and the jester’s debate about how best to avoid falling ill to the epidemic (holding your breath and avoiding air vs. avoiding physical contact so as to avoid sin) feels eerily familiar. It hardly bears mentioning at this point, but this is a film that knows how to set the mood.

A feat of quality production, Picnic Under A Gibbet is dark, morbid, funny, and cutting. Nothing feels out of place, and for those who can stomach it, the corpse is captivating. Come for the debate on semantics, stay for the unholy reminder of our own dark times.