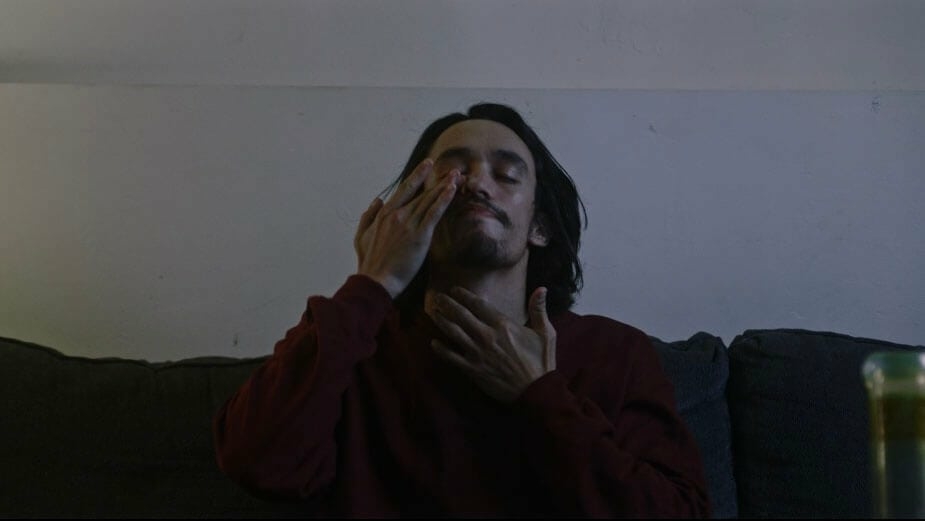 Director Daniel James Dismuke (also doubles as the lead and writer) touches upon multiple themes in his 20:28-minute-long Mama’s Boy. That the film is a story about a mother and her son is a dead giveaway from the title itself. But, that it goes beyond the warm, affectionate, reminiscing shorts we have grown accustomed to watching might not. Mama’s Boy is anything but warm. It’s bare, it’s crude, it’s incisive. And, it prods and nettles until you reach a point of no return, a point of absolute dissolution from where there is only one alternative—that of confrontation.

A journey of self-realisation and acceptance is a much-discussed philosophical topic that has found its space in essays and theories. But, to have it designed singularly for a film is a tough call. And, yet this story by Matthew Thomas becomes a deep, reflective tale that more likely than not feels like a personal experience than a dramatic contribution to cinema. Dismuke and Thomas whose screenplay brings Mama’s Boy to life is a hauntingly, affecting film that not only deals with a soured mother-son relationship, but also one of introspection and empathy.

The father’s call reminding the son of his mother’s birthday is a mere cue. A tactical and intelligent choice in setting the premise. Our lead (Gordon) played convincingly by Dismuke, is already on another high; albeit just not a celebratory one. An addict himself, the place he inhabits, is an evidence to his crime. The scenes are poignant, for they offer Dismuke much material to prove his mettle as an actor—and he succeeds. The listlessness, the forlorn look in the eyes, Dismuke nails it. This isn’t a person experimenting through his teen years. This is a habitual offender. That he seeks respite in the substance-use is plain to see. That he uses it to hide his blinding pain is what the film offers.

Jennifer Collins, who plays his mother has limited screen time. (Collins needs a special mention, not just for her acting, but admirable control over her voice.) Her absence is as significant as her presence. The rich writing takes into account the mother-son’s backstory and injects it haltingly at well-timed interjections offering a slow, but heady concoction of facts and perspectives as the duo exchange furious words at one and another. A desperately hurt Gordon reasons, questions, and even, accuses his mother of negligence, abandon and unimaginable pain from the exposure of her infidelity and drug abuse. Now, a fully grown man himself, he struggles to cope and recover. Healing is out of the question, at this point. While this might sound familiar, it is the incisiveness in the dialogues that blows the cover wide open. This isn’t a film that mollycoddles or soothes you. Instead, you are left as vulnerable and void as Gordon. And, it is here that Mama’s Boy sets itself apart from the rest in this genre.

The beguiling tracks of Dream A Little Dream Of Me and Tonight You Belong To Me are pointedly taken over by Michael Licata’s music, which ebbs and flows throughout the timeline of the film. Dismuke uses silences effectively to mute out not just aesthetically the audio appeal of the narration, but also to highlight the conversation between the duo. This is amplified with Zeke Kitchen’s skilled cinematography and editing. Watch out for the scenes where a dazed Gordon breaks into a dance or the ones where at the peak of his frustration, he turns his room into a site for shards of his anger to pierce through.

Not much credit is usually given for the stellar contribution the hair and makeup department makes. It would be a shame to repeat that mistake here. For, McKenzie Gregg’s contribution in this regard is not only accountable but also highly responsible for the authenticity in the characterisation of both Gordon and his mother. The actors are turned into vessels for their characters. Be it the stained sweatshirt Gordon wears, or his mother’s fine lines, details have been accounted for and it makes for a convincing portrayal of an addict. Add to that, Joshua Kezzer’s touch to the colour palette and we have with us a bottle film that doesn’t fail in being authentic.

What is difficult to process in a film of such minuscule length dealing with a sensitive subject such as this one is the magnitude of its content. Gordon, now at the peak of his addiction and perhaps even youth is bitter about a childhood robbed. His anger only matched by his mother’s defiance and subsequent acceptance of not just her flawed parenting, but also her self is remarkable. Particularly because Collins isn’t even in the frames for the most part of the conversation. But, it’s the hazy, hallucinating world of Gordon and his unspoken words that fill our screens making it a hard, painful journey towards recovery.

Dismuke touches upon a subject that always warrants opinions, even from strangers. That parenting is a daunting task is known to all. But the thanklessness of it and the chance at redemption that is denied to many aren’t. And, in taking on a subject such as this one, Dismuke proves his ability to tackle the tough. Filtering through the social cushioning, he presents the flawed nature of parenting, growing up and addiction. The hard truths about recovery and healing are explored in a plain, matter-of-fact manner leaving the audience with no choice but to do the same for themselves. The audience, in effect, becomes Gordon.