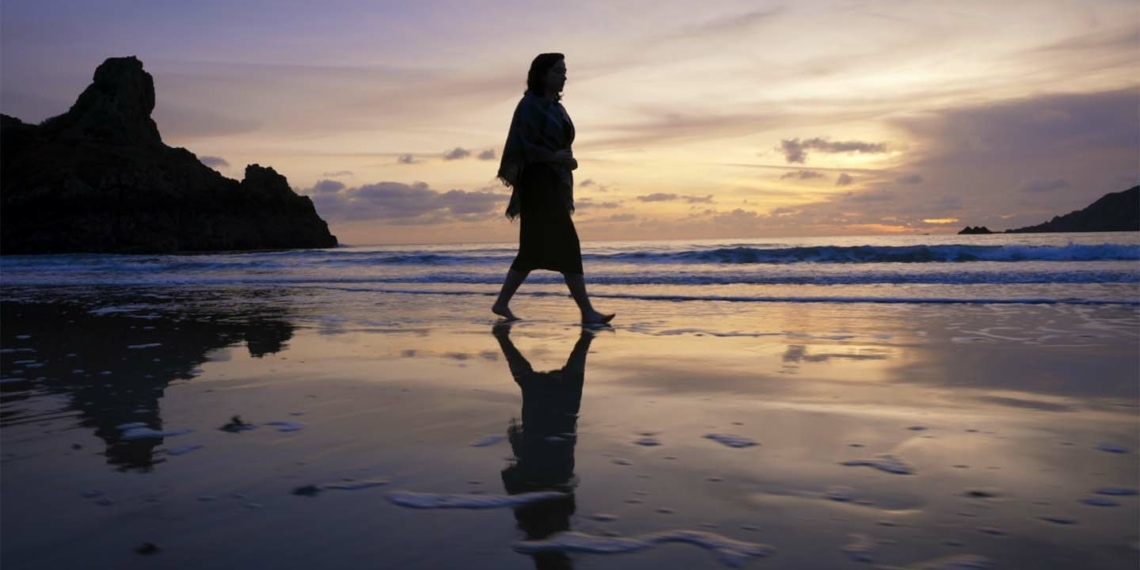 Watching writer-director Alex Bates’s Occupied is equivalent to having a slice of history lesson served with drama and philosophy; and all within an unquestionably good period-setting. It is the 40s’ and in the 21:56-minute long narrative, Bates not only manages to successfully recreate the premise and the stunning imagery of the Channel Islands, but also delve deeply into the after-effects of war.

Will (Dan Le Friec) and Carolyn’s idyllic life is doomed. War doesn’t spare anyone. The Nazis are one bomb away. And, on the fateful day of 27th June, 1940, it’s not just Will and Carolyn, whose life is set to be turned upside down. The repercussions of war are predictable. Countless films have been made on this subject. Photographs, documentaries, books and whatnot. And, yet in the short film category, we have a strong dearth in films that authentically present the subject with sensitivity and aptitude. Bates’s Occupied, however, manages to skillfully address this grievance.

It’s primarily through the eyes of Carolyn (Sapphire Brewer-Marchant) that we understand the mood and setting of the story. It’s her heartbreak and loss that becomes the voice, and it is her face that becomes the canvas of the shared grief of an entire generation. In making these creative choices, Bates; both risks and experiments with his storytelling techniques and they pay off handsomely. Add to that, production designer Dana Jungerius’s brilliant contribution and what do we get?! — a believable portrait of an era and time that has long lost its lustre in the pages of history.

Such care has been taken into the production design of Occupied, that there is not a single frame, not a single beat that is out of order. And, Joseph Collier, whose composition switches between melancholia and nostalgia instantly transports one into the mid 20th century. The amount of effort put in to get these details right only stands to prove the passion the entire crew shares.

Much against Carolyn’s instinct to abandon their home on the island of Guernsey, Will decides to stay put. In the wake of the looming war and the German troops landing at their doorstep any moment from now, that hardly seems wise. But, in a film based on historical events, there is room only for regret and resentment. Or is it? Will’s demise leaves the widowed Carolyn bitter and lonely. And it is her journey that truly gets the pulse of the film. Brewer-Marchant is arresting. Her words are sharp, expressions sharper. There is anger, there is grief and there is an unyielding resentment that is brewing. And these become evident in the conversations between her and Millie (Harriet Billington), the only friend perhaps left in this forsaken island for her.

What is interesting about Occupied is that unlike other war-based films, this one comes with very incisive writing, especially in its dialogues. There is no philosophising the pain or loss. No eulogies for the dead, nor compassion for the living. It is brutal and real. Just as the tragedy is avoidable, the hurting words, too, are; and yet they are uttered. As Carolyn begins to descend into complete self-destruction, she isolates herself from the outside world that is now filled with the German soldiers that have come to occupy the island, her home. In an effort to stay away from the ‘‘killers’’ of her husband, Carolyn has become a shadow of her former self. Gone is the smile, the hope and the will to live. Now replaced with anger and a vehement desire to punish all those who scarred her fate, the journey from self-destruction to realisation comes in the name of Jens (Harry Giubileo), a German military aviator whose crash landing into the shores of the bombed White Rock scripts a new tale in Carolyn’s life.

The editing (Rebecca Chapman) is mostly evenly paced, letting each scene sink into the frame before moving on. This helps the audience in holding on to the time frame within which the film is set. Add to that, the props used, from the clothes to the hairstyle, the precision with which the 40s is brought back to life, it is hard to imagine Occupied as set at any other. Also, Cinematographer Matthew Stockreiter has a handful. Be it the hard-hitting bombing scenes or the looming carriers in the air, the lensing brings back to life the abandoned history of Guernsey. There is an unmistakable tense energy in the camera work that fittingly makes the panic and dread felt.

Does Carolyn have it in her heart to forgive herself (let alone the Germans)? Does time truly assuage wounds? Will Millie be able to help her friend? While one needs to watch the film to answer these questions, one thing can be assured — Occupied will help revive the forgotten chapter on the White Rock Bombing.

With many members in the cast from the island itself, this film is a true ode to the lives lost and lived on Guernsey. What Bates achieves is incredible considering the narrative and timeline. For a film dealing with a subject as niche as this one, it’s the authenticity rendered that makes it relatable and universal in its appeal. After all, not many films can boast of Occupied’s contribution.