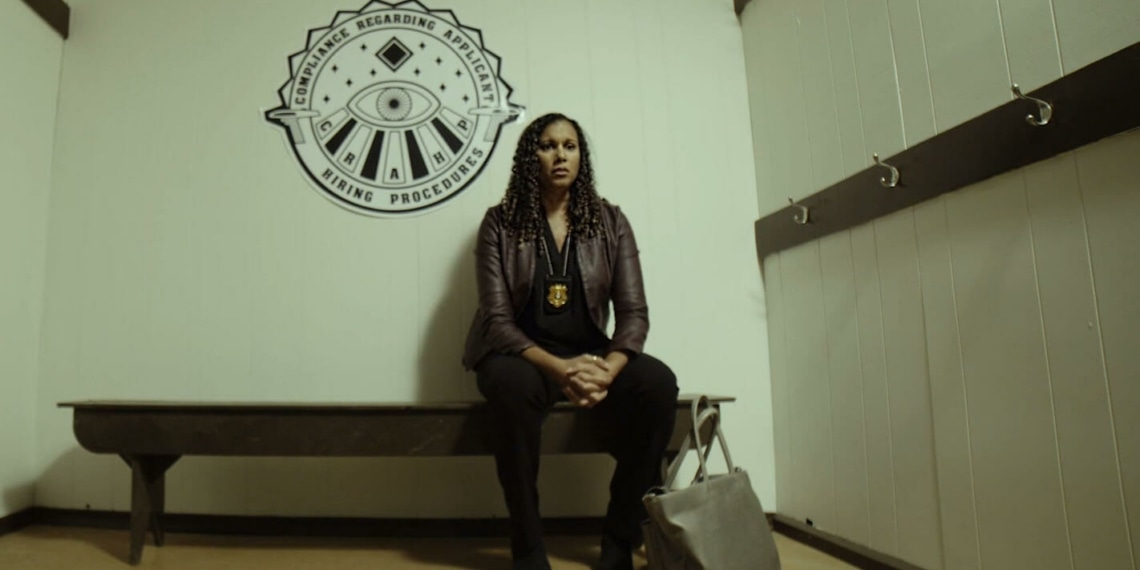 We are introduced to the year 2065 and in not so flattering words. The pun is hard to miss; the ambience harder. The wordings are well-chosen. The telling choice with the colour palette in hues of blue and white slowly egg us for a voyeuristic ride into the future. And, the next 09:22-minute long narrative promises to deliver. But, wait. This sounds oddly familiar.

Director Monica Mustelier’s Compliant will sound predictable, but she has tricks up her sleeve. In presenting a rather prevalent practice of our contemporary times into the distant future, Mustelier warns and cautions us of the time left to mend our ways, before the future gobbles the generations to come, for our crimes. The film, a dystopian short relies heavily on stark humour to get its message across. A socially relevant film, Compliant carries with it the promise of a feature-length.

In the year 2065, parity and equity in Corporate hiring are policed by an elite military regime called Compliance Regarding Applicant Hiring Procedures or C.R.A.H.P. Their sole mandate is to enforce these regulations… without mercy. These are the cautionary words that fill our screens with the opening credits. A film on the hiring procedure set in the dystopian future, and presented in the format of a black-comedy, Mustelier shows the way to offer something more than unique. Who’d have thought a film dealing with HR issues could be creatively considered for raising awareness?

General Carmine Wolcott (Cynthia Crofoot – also doubles as the writer) and Colonel Ryka Anand (Gugun Deep Singh) are members of the elite C.R.A.H.P. (a hilarious and befitting acronym that is validated throughout the course of the film) that is set to interview Detective Sara Cordell (Siobhain Fray). A 2021, August 1st born, Cordell is everything you’d expect from a detective. Sharp, alert and sincere. Fray has the face and demeanour for it. She easily meets the criteria, and as an actor, she makes Detective Cordell, a believable entity. We sense her nervousness through her fidgety self, her pep talk to herself in front of the mirror, brings back memories of moments we have all had to face, before an interview. But, nothing prepares us for the rapport between the interviewers or the subsequent events.

General Wolcott and Colonel Anand, share an unusual chemistry. To begin with, both actors share an amazing control over their voices. The modulations, in fact, make their characters’ mighty presence even more felt. The two characters, additionally have a wonderful canvas to paint their backstories and dynamics in, and in Crofoot’s measured writing, the screenplay offers more than enough hints for the audience to guess the deeper meaning behind their conversations. In all this, accompanying are the composers (Jamie Ruben and Bret Higgins), whose contribution plays along with the dance between the three titular characters.

Editor Steve Kelly keeps the pacing consistent throughout. As the interview turns from jocular to stern to intimidating, the audience along with Detective Cordell begin to wonder at the absurdity of the questions thrown around. Words are weighed, glances are exchanged and the environment suddenly becomes all too familiar for those who have been in similar situations. DoP Steven Lindsay’s flexibility is limited in the bottle film, but manages to offer clean, angular lensing that balances the extra closeups with shoulder-level shots.

What works in the favour of Compliant is its truncated timeline and sharp, witty dialogues. The acting sustains this reasonably well. For those whose preferred genres include comedy, thrillers and futuristic dramas, this one is right up their alley. For those unfamiliar with the concept, this can prove to be a good guide to beginner’s level. Either way, Crofoot has enough imagination and skill to expand this into a feature-length, if not, this still offers a pretty good yardstick for her talent.