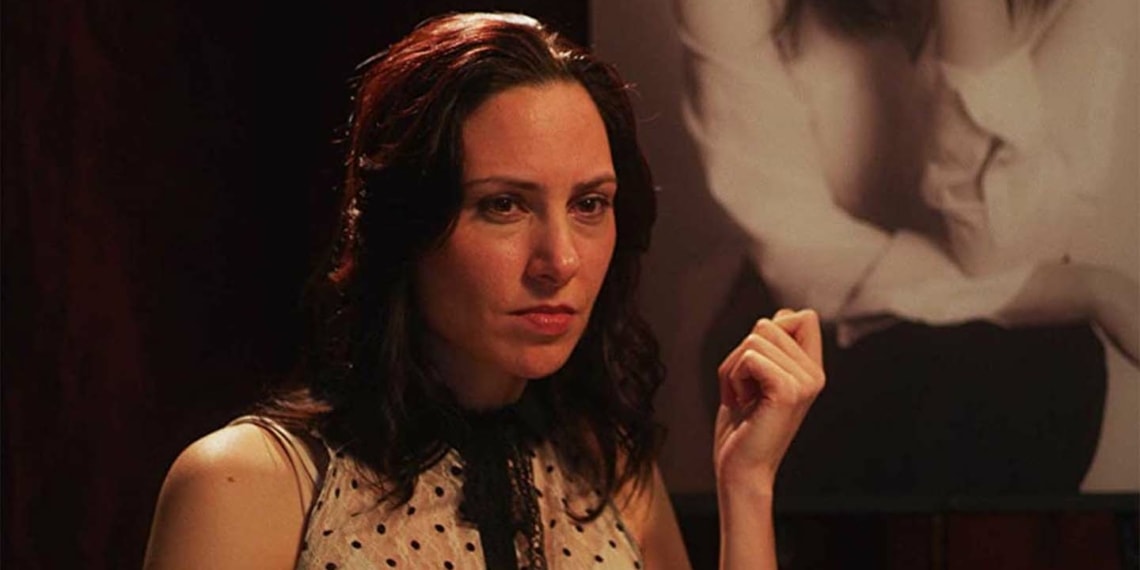 Nora Jaenicke’s The Reading (co-written with Bobby Peretti) wastes no time in setting up its plot. Opening with an author reading to an audience, one might think it is mere filler, but pay attention to the audience members, and one can feel instinctively that there is, in fact, something about it that must be paid attention to.

As best-selling author Elsa Ricardi (Ruya Koman) reads from her memoir to her generally enthralled audience, the camera shifts to place the focus on them. Enthralled or otherwise, their unwavering gaze can feel rather disquieting. This is the product of DP Riley Nightingale’s framing (they have also co-edited the film with Leonhard Lierzer) and it soon becomes obvious that the discomfort stems primarily from a shadowed man in the audience. This is a man not charmed by the author or her book, and it shows, even before his face is visible, let alone words are exchanged.

Now for the memoir itself. From Elsa’s reading and subsequent interview, we learn that it is about a gay boy and the straight girl—Elsa—who falls in love with him. She has taken a few creative licenses, Elsa says. Soon, the man takes his position: everything about him screams hostility, and the moment he uses f****t to refer to the male character, redemption or audience sympathy appears unlikely.

Hereon, the narrative moves full throttle. The man is revealed to be Jake, the boy in Elsa’s book. Devin Burnam plays the part with an unrelenting energy, impossible to look away from. The story is substantially less pretty than what Elsa chooses to remember. It was less a case of helping him embrace his identity, and more outed him because she was resentful.

As Jake recounts his tale—the theater now empty—the air gets progressively heavier, and we see it manifest on Elsa’s face. Koman equals Burnam in her powerful portrayal, quieter though it may be. It certainly helps that the scene uses shot/reverse shot. One might otherwise not know which actor to be transfixed by.

Silence engulfs the final shot. As the film closes on Karim Shalaby’s score, and there is again space to breathe, one is left grappling with the sheer power the last eleven minutes held. Now if that doesn’t speak for itself!