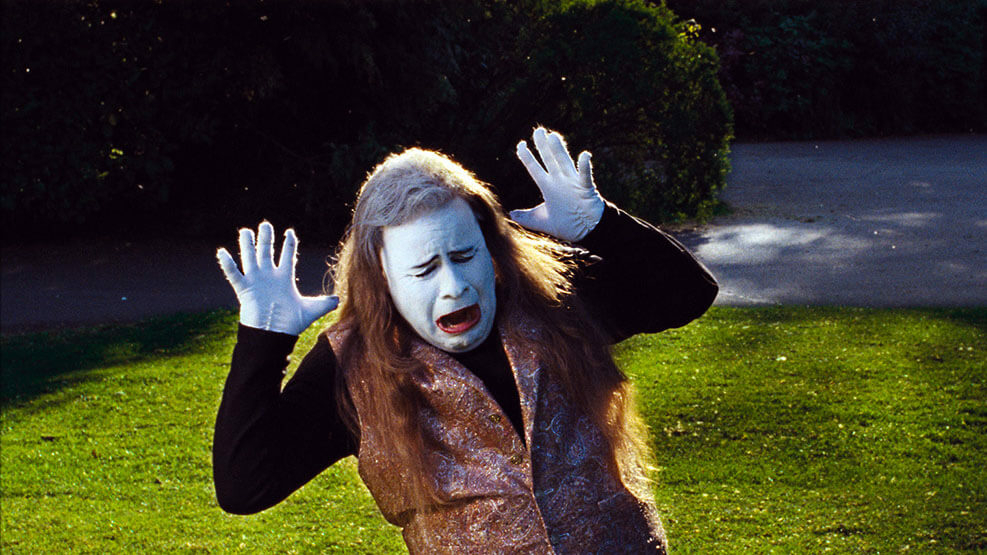 How do you work a heavy subject without it sagging under its own weight? David J Paradise attempts to answer this with his 14-minute drama (co-written with Angela Paradise), Plastic Fingers. The story follows Sebastian, a mime, whose daily life is dogged by his mother, who, as we find out, is actually dead.

Set in a park, we meet Sophia (Kiki Kendrick) calling out relentlessly for Sebastian (Francisco Basignana). It makes for an interesting contrast that while Sophia is dressed neatly in her Regency-era clothes, Sebastian looks haggard, even though he is working. As the ever-moving camera follows Sophia around in her quest to find Sebastian, it serves to convey her overbearing, intolerant nature. For the minutes that follow, Sophia varies between being authoritative, selfish, and outright cruel, going so far as stealing his meagre earnings. All while Sebastian maintains his cheery manner—which clearly naturally extends beyond his mime persona.

She exercises and maintains her control over him by regularly and emphatically criticising him, and none of it constructive, running mainly on lines of how undeserving and hopeless he is. The emotional abuse she metes out to him does eventually take its toll; about halfway through the film, Sebastian collapses. Strangely enough, it is more of Sophia’s (stinging) words that drive him to get back up again. There is no optimism or warmth in this turn of events. The film makes it clear; if Sebastian gets up, it is due to his own fortitude. His mother certainly has no affectionate encouragement to offer him.

So far and throughout, the film maintains its slantly humorous, ironic tone, while the lighting is all bright and sunny. As the director intended, Plastic Fingers deals with difficult subjects (emotional abuse, trauma, schizophrenia) but does not weigh one down—the theatricality counters the bleakness of its story. Instead, the feeling that takes the foreground is more likely to be outrage.

The film does not end with Sebastian getting up and resuming his life just the one time. There is more of Sophia, and therefore, more for Sebastian to fight his way through. When the film closes, it is on an uplifting note, while managing to also remain faithful to regular life. Take heart, it says. And this time, warmth is not missing.