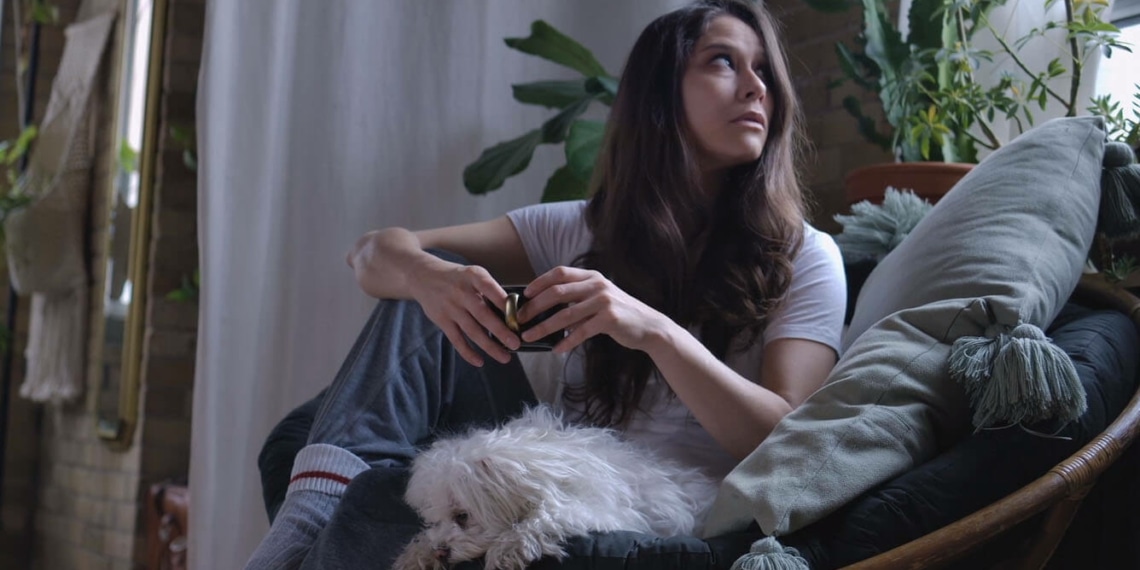 Director/editor/DoP Stephen Bell’s 09:45 minute long film picks on the theatre industry. And, by focusing on the life of one of its artists, 400 Days Later sheds light on this often overlooked profession. That this pandemic hasn’t spared anyone is well known. What is additionally often remarked upon is the strength with which those in the line of duty have dealt with the blow of the virus. But, what has been sidelined and not spoken enough about are those whose professions have taken a serious beating due to the lockdown. Those, whose livelihood has been robbed off them ever since the lockdown was imposed. Or of those, whose idea of living and breathing is synonymous with their career that is not to be revived anytime soon.

The Huntington Theatre is closing down due to the pandemic. And, while the semi-empathetic email from her boss is comforting, it doesn’t assuage the fears and dread that it comes with—that of an uncertain future. Natalie (Angela Bell) is the star of a show that is not to see the light anytime soon. While her empty apartment rings a bell of its despairing habitant, it carries the hallmarks of a working woman, whose tight schedule is not to be messed around. From the alarm clock to the packed calendar displayed on her refrigerator, we know that Natalie has no time for anything outside of her work. (Kudos to the production design for taking care of even the minute details!) Accompanying her loneliness in her nest is a certain Molly—a furry little, 4-pawed being who frankly, we couldn’t get enough of!

Also written by Angela Bell, the plotline develops around Natalie and her routine that gets increasingly despairing with the number of days the lockdown extends into. Effectively, with time, the days simply become a number, trailing from single to triple digits. And, we remain equally invested in her spiral. Bell makes Natalie a breathing, living entity. Notwithstanding her makeup (watch out for the scenes where she wears makeup to cover up the vestiges of her very evident desperation) Bell brings to Natalie’s character a certain melancholy, that is unmistakable. There is the ebbing of her inner strength but also a desperate, kicking hope to surviving.

The colour palette sticks to sombre shades, instantly making the viewer realise the environment. That the lack of a peppy background score is guessable, but the restraint showed by Bell in refraining from using an ultra-dramatic score is much appreciated. In fact, talking of restraint, one can’t help but observe that throughout its under 10-minute long narrative, nothing is overplayed or stretched. Neither the characters, nor their setting and certainly not the dialogues. In fact, this two-character-starring short relies on its audience to understand and pick on its storytelling. An interesting choice, considering how a topic of its kind usually warrants dramatic shots and melodramatic performances. But, instead, what we get is a certain Natalie, whose character arc speaks volumes.

Even the lonely walks with Molly through Toronto lanes (400 Days Later was filmed entirely in Toronto, strictly adhering to the guidelines issued by the Ontario Public Council) reeks of loneliness, bitterness and frankly, dread. It is Juliet (Madeline Leon), the only other character in the film who manages to bring in a freshness to an otherwise doomed setting. But, careful, her enthusiasm isn’t infectious and it is in these frames, that the two women, both polarised in their experiences of the pandemic and the lockdown that 400 Days Later wins us over. Not only are their acting and portrayal of their respective characters commendable, but also the synergy between the two that makes for the second half of the film particularly engaging.

Reserving the spoilers, 400 Days Later is an honest attempt at showing the mirror to the spiralling of artists and the industry they call their home. In Natalie’s own journey, and struggles at surviving and finding hope, we see a sliver of ourselves and remind that nothing, not even this pandemic can last forever.