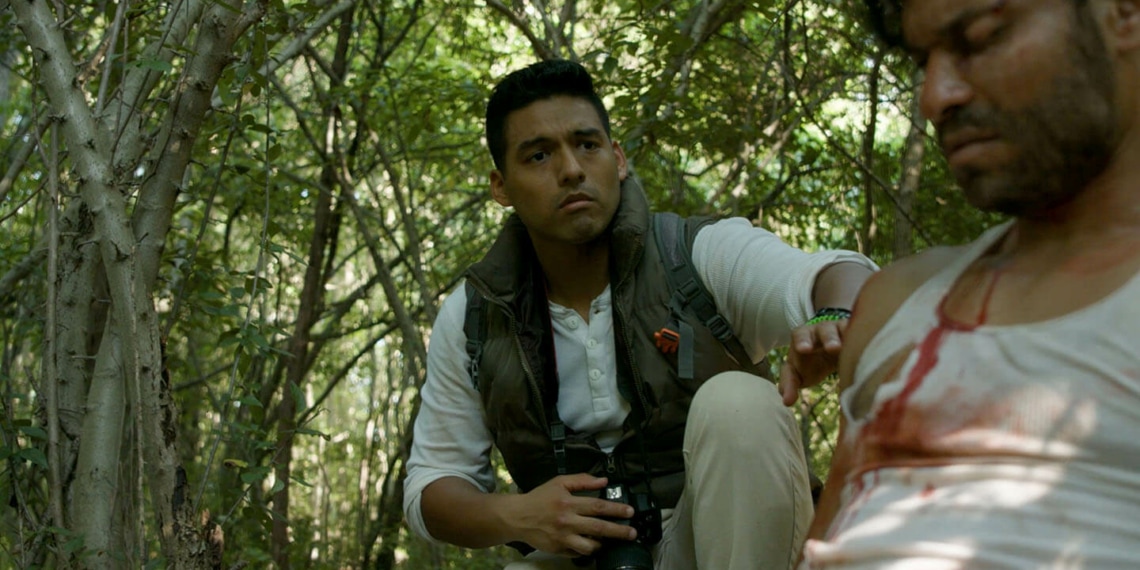 Even as news of the Biden administration reuniting 4 migrant families separated on Trump’s diktat makes waves across the globe, the hope is met with bitterness. Bitterness of the hate crimes meted out against the migrant families, as a direct consequence of the hateful rhetoric the previous administration exercised. While short films seldom experiment with political dramas unless pitched as a documentary, writer-director Issack Cintrón subverts this paradigm with his thriller drama. Fruta Extraña, a 12:15-minute short portrays the dire consequences of hate speech.

Omar (Mauricio Hidalgo), a photography student is in the woods for his assignment. His keen eye scouting for the images is interrupted by calls from home. Professing her love and affection and asking him to spare time over the holidays is a mother, separated by miles. In today’s times as we remain largely confined in our homes, due to the pandemic, perhaps quality time with family members has become second nature. But, try to recall early University days. Long hours of studying and the newfound freedom can seldom remind one of their homes, unless, of course, the days aren’t as joyous as one imagined them to be. Quite naturally then, in the woods, in the pristine surroundings of thick green, Omar is keen to hang up the call, as his eyes locate an unusual fruit. Perfect for his assignment.

Cinematographers Emmanuel Rodriguez and Jim Galizia have an unusual task at hand. On one hand, their perspectives have to match that of the protagonist, particularly because the concerned individual is a photographer. Too many films have faltered here, wherein they neglect the character’s own profession and personality while narrating the story. Evidently, the duo have masterfully sidestepped this disaster. Not only do we get to enjoy the wilderness of the forest, but also keenly observe it through Omar’s eyes, amplifying the experience while providing a visual tunnel into his thoughts.

Much like Omar, Rodrguez and Galizia try to capture the light. Rather than altering between colour grades to turn the forest into a sinister monster, the duo play off the natural light to create an authentic visual essay of an expeditionary experience. As Omar is startled by the strange noises, we too react to the surroundings and begin to fully appreciate the sound design incorporated (also by Cintrón).

The suspense of this thriller is built slowly, through its background score and lensing. Each time Omar is alerted by a strange sound, the screen eerily pans to its source while leaving enough clues for its viewers to determine the bearings of something far more profound. However, the film particularly takes a turn when Victor (AJ Hierro) is introduced. Badly bruised, and the torment evident in his eyes—this is a man who has been deeply traumatised. Despite their minuscule screen time, Hidalgo and Hierro play off each other’s energies. As much as Victor’s predicament is visible to us, it is also the horror we see in Omar’s eyes that knock us down.

To Cintrón’s credit, who also doubled as the film’s editor, the ensuing scenes become a muffled cry with blurry imagery of a happy reunion, which only acts as a worrisome catalyst that heightens the audience’s preparedness for the climax. Reserving the spoilers, what is particularly noteworthy about Cintrón’s Fruta Extraña is that it doesn’t aim to ride on the political tragedy of what happened during the previous administration in the States, but instead, tries to highlight through a non-traditional narrative, the personal tragedies of persons involved haplessly in the face of ill-informed government policies and hateful rhetoric.