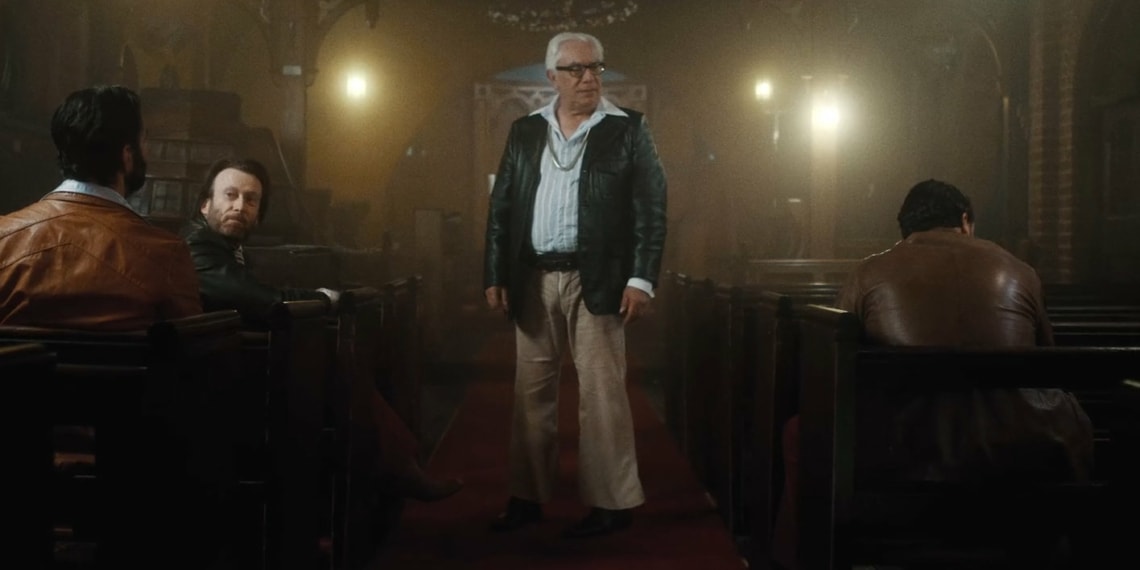 16 minutes feel short. Terribly short. For a film of its magnitude—both in terms of the production and concept—Hells Kitchen could have easily been turned into a series or a feature. Which makes writer-director Steve Young quite the wizard. Truncating something of this magnitude into a short of less than 20 minutes certainly requires some extent of wizardry.

It is the late 70s, and somewhere in New York, it is the mafia family congregating in a Church, worried about their missing shipments. Gang wars and mafia drama, whether in books or films have captivated us enough. From their impeccably well-tailored suits to their love for gourmet meals and family get-togethers, their profession inspires both grudging respect and abject horror. That they are on the wrong side of the law is of no doubt, but within their own profession, they are sticklers for unwritten codes. Omertà is not for the books, it is for life. As is loyalty.

And so, it should not come as a surprise as to what would be the price of transgression in such a family. The irony is not lost either. The setting of the film is, for the most part, a church. One might either presume it to be some twisted sense of humour to take crime straight into God’s house, but on the other hand, it also tells that for this family, their work, even if it is crime in the eyes of the law, is sacrosanct. If loyalty is the religion, then Jimmy ‘The Don’ Gallo (Serge De Nardo) is the God here. De Nardo embodies every bit of the family head he represents. He is composed; his demeanour breaks into incredulous jokes and just as easily into despair or anger, he becomes The Don.

Johnny Santorelli (Steve Young) is entrusted with the enquiring of the missing shipments. And soon the suspects are pulled up. In fact, the very opening scene of the film begins on this note. Irish (Troy Larkin)—the name itself is a sly joke—is pulled up for the lost consignment and it is he (who, by the way, has wonderfully enacted the final hours of a terrified man), whose interrogation lets us know of the brewing trouble. Young steals the show with his impeccable comic timing. As is mentioned before, the dialogues are very well written, but what makes them doubly impactful are their well-timed deliveries, which, to the credit of the entire cast of Hells Kitchen, everyone manages to get right.

Where the film might falter is in its authentic revival of the 70s; clothes and references to the said time period alone do not do justice, but may be enough considering the storyline and duration of the film. It is evident that great care has been taken into the various aspects of this film’s making, be it the music (Daniel McCulloch) or characterisation. For a film with such heavy dialogues, and almost all bordering on some kind of humour, it is remarkable that at no point does it reduce the characters or their stories into laughable caricatures. They are not imitating someone’s life, they are becoming that someone—which is both terrifying and awe-inspiring.

McCulloch’s composition and drone operator Aaron Carroll’s work offers such a voyeuristic experience to the mafia life that it is incredible. The amount of work poured into creating the set and the ambience, including the closing shot is such a fine example of Young’s understanding of filmmaking.

The very suave and composed Eddie Galanti (Christopher Farrell), the perplexed, newest entrant/enemy Tommy Bianco (Andrew Lorenzo), and silently observing Sleepy Joe (Justin Anderson) make for a wonderful cast in this ensemble drama. As Tommy is invited for discussions, tempers flare, arguments ensue, but in this altar of God, The Don reins with an iron fist.

DP-Editor Joshua Francesco Hoareau, whose exceptional handling of the camera captures the beauty of the church (watch out for the light through the stained glasses juxtaposed against the very earthy composition), and the dialogue-heavy conversations between the gang members, and poignant shots revealing the power dynamics, deserves every accolade coming his way. As does Young, for very elegantly narrating a tale of an intriguing mafia family.