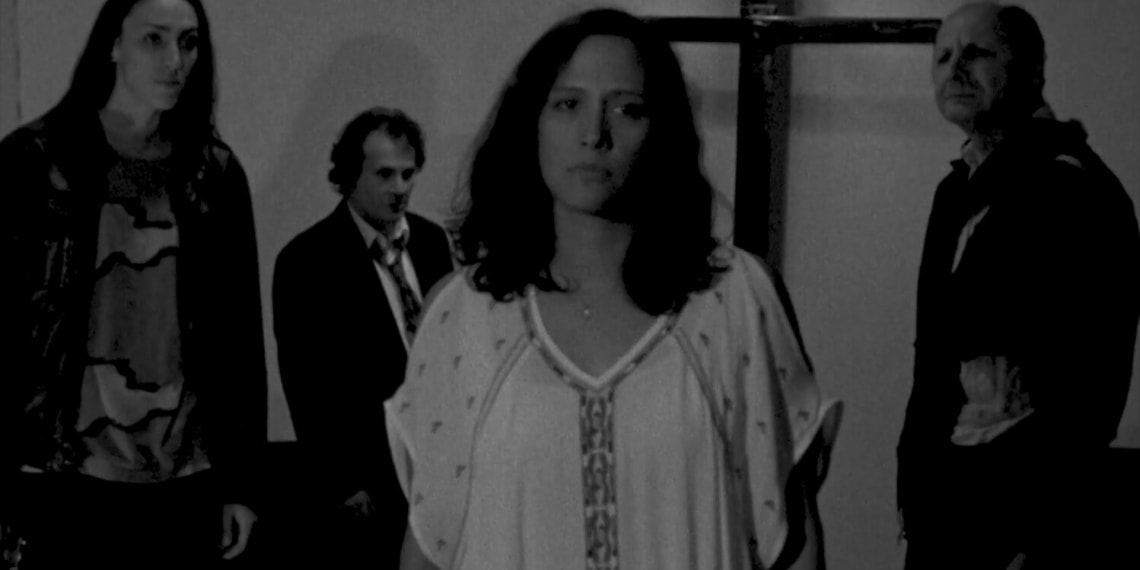 Writer-director James Ristas’s Burn A Debt carries a distinct similarity to Todd Haynes’s Superstar: The Karen Carpenter Story. The use of barbie dolls in Haynes’s film which was made in just over ten days while he was completing his MFA at Bard College, earned cult status for its uncommon storytelling. Ristas’s, however, deals with the cult itself, one that existed since the times storytelling did itself. A 20-minute black-and-white short, Burn A Debt is a fantastical narration of Christ’s message for the contemporary audience. But here comes the twist: it is a woman that becomes the messenger here.

Bernadette (Amber Myers) is to wed Louis (Kris Salvi). A terrible choice, as we come to quickly learn, as Louis’s monstrosity becomes abundantly clear. He is contemptuous, evil and outright malicious. As are his friends. As if on cue, the Church and its setting, the interiors and idols stir something in Bernadette. At this point, we are simply thankful for anything that might steer her clear from a life of misery and despair with Louis.

The film largely relies on Beethoven and other classics, to add yesteryear’s charm to it. Add to that the colour grading and deliberate non-linear narrative, it evokes a sense of both archaic and modern styles of storytelling.

As the newly enlightened Bernadette begins spreading her message of love, her dumbfounded and deserted fiancé, in blind rage, vows to make her repent for her choice. As she is drawn towards her calling, he is towards his: that of evilness. The dichotomy of their choices is not lost on us. Enough clues have been dropped through dialogues and/or actions to summarise each character.

The dialogues are rendered muffled, making it a tad bit difficult at times to comprehend. That, along with the highly saturated scenes interferes with the viewing experience, but from the character’s perspective, makes it understandable. What she has witnessed and experienced, only a few have, and only a few shall. It is not meant for the ordinary.

As she embarks on her spiritual journey, the obstacles are evident. She is confronted with doubt and cynicism. While there are believers (Father Magus, played by Steven Burstein), it is not without a spoonful of salt that her faith is respected. As Sarah (Samantha Noble Webb), the only other woman in the film, is accosted by men, her act of self-defence results into a terrible crime. It is here that the dilemma begins for all, including the audience.

Does forgiveness come to all? Is everyone worthy of it? If everyone is entitled to heaven on confession, then who is hell even reserved for? And what credibility does confession carry with it? Cinematographer Sam Cohen has a herculean task to not only capture scenes of disproportionate staging, but also what seems like stifling interiors. But he does it with restraint and control.

Jim Landry’s editing keeps the film mostly evenly paced, ensuring that the non-linear narrative does not come across as too disorienting for his audience. Due to the number of character arcs at play, the duration does not offer enough time to flesh it all out, so audiences must make do with a summarised treatment.

Burn A Debt is a bold concept. The production design, especially the use of the tiny figurines to fill in the parallel narrative covering all the way from the Christ-era to WWII are brilliant. The film offers a believable trajectory to its own timeline. As the characters all begin to question themselves, the intent, and will of God, we too begin to wonder at life’s mysterious ways.

This is not a film that offers comfort. It is the kind that makes its audience think, question and ruminate on lessons passed on and forgotten. Centuries ago a man was crucified for the sins of his brethren, and his resurrection birthed an entire religion. In Ristas’s Burn A Debt, we trace his journey, if only in fragments, and through the eyes of a woman.