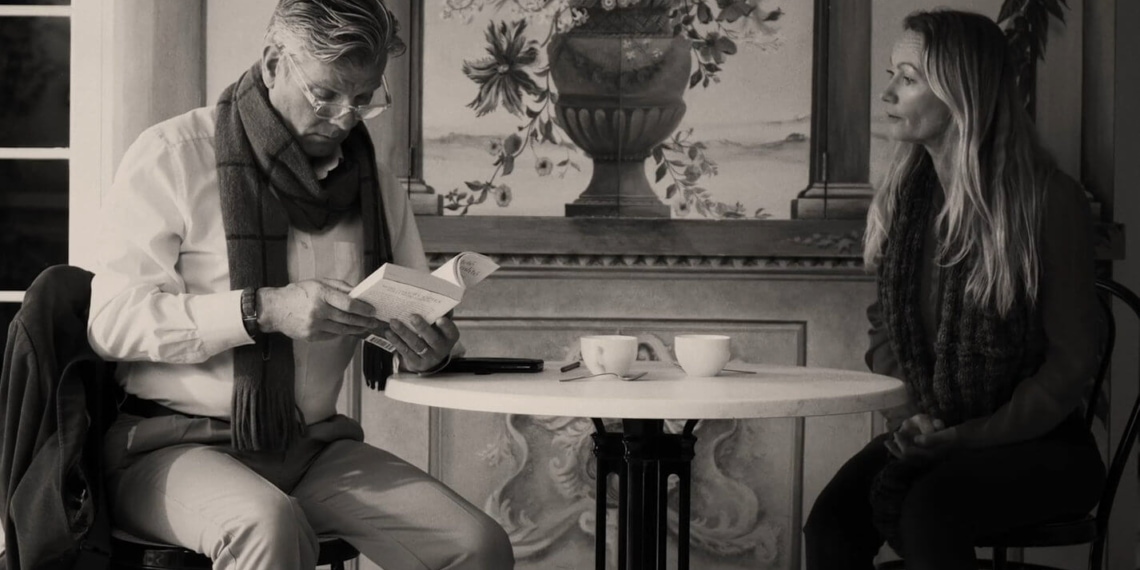 In a little over 12 minutes, writer-director-editor Noah Stratton-Twine establishes what has been universally known: that marriages may be made in heaven, but their contract is certainly tested far below that horizon. A couple’s choice to stay together for over four decades calls for celebration, and a chance encounter in the City of Light (we’ll overlook the unplanned setting. After all, it is a miracle they even talk to one another after forty years of marriage!) and a forgetful husband makes for the perfect storyline here. Add to that a wife whose eccentricity matches her husband’s philandering gaze, and we get the perfect fodder for comedy.

Mr and Mrs Bonavich are sitting across from each other, their body language and demeanour not entirely belying the countless arguments and bitterness that have settled into their married years; the actors carry an air of matured restraint. It is interesting how a slant gaze, an upturned smile can come to imply so much more. The idea that sarcasm is effective only in the right delivery is passé. It is equally, if not more effective, when evoked through gestures. And we see that in plenty in this Jo Ball and Andrew Foster starrer Blue Ruby.

A renowned author, Hugo Bonavich (Andrew Foster), and his wife Audrey (Jo Ball) are discussing, or rather dissecting, a book of Hugo’s that has been translated into French. The dry sense of humour that is generously used, comes in handy to make this black-and-white short feel lighthearted. As they carefully tiptoe around the barbed remarks and snide comments, we are amused at how familiar all of this seems. It is to the credit of Foster and Ball that seemingly overexposed material comes across as a fresh piece. They render their characters with a nuanced freshness that makes their otherwise stale marriage remarkably entertaining. As Mrs Bonvich excuses herself, the waitress Clem Paquet (played outstandingly by Sarah Bauer) enters the scene.

Now, far too many films have used a similar character to illustrate the point: the husband, a renowned artist, meets a young (female) fan and is flattered beyond his wits. The wife, a jealous, ill-tempered woman, sets out to send across a message, loud and clear. So, what makes it any different in Blue Ruby? Primarily the pace and the acting. The film is not only in black-and-white, but in every cinematic sense, an ode to 20th century films. In fact, the characters, especially that of Clem, carry a distinct charm of the Chaplin films. As the husband-wife descend into chaos, poor Clem is at her wit’s end, wondering what ill-fate got her into this melodrama.

Eliott Poyzer’s cinematography does well to pick on the nuanced tick of the characters, and makes Blue Ruby a surprisingly easy-to-watch film, despite its characters’ own personal narratives. What might seem rather unsettling to some, however, is the fact that while everything about the film, from its music to editing leans towards comedy, the characters’ acrimony (although very well shrouded in years of established comfort), sarcasm and humour, is rather tragic. After all, it takes only a beat for a comedy to transgress into a tragedy.

But for Stratton-Twine’s luck, the stellar casting saves the day. Their deadpan dry sense of humour, the strained, and hence, very fitting chemistry between the two, the seasoned camaraderie of having known someone for long, all translate beautifully on to the screen. Such is their rootedness in their characters, that one cannot help but look forward to the golden anniversary.