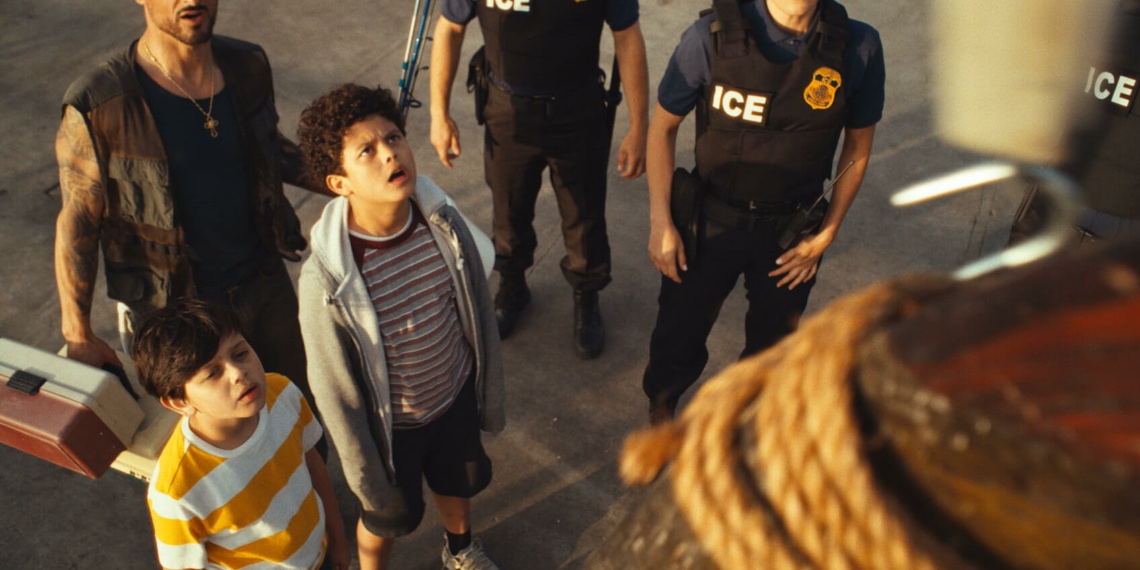 Director João Dall’Stella’s Dia De Las Carpas feels warm on multiple levels. Like an afternoon breeze on a lazy summer day, the film carries with it a wonderful, lingering note of comfort. A film on adventure and fantasy, with its characters in a surprisingly well-balanced cast, Dall’Stella in no uncertain terms makes it clear that this is not just a children’s story. By weaving magic and realism into his 14-minute short what he instead presents is a tender takeaway for the child in everyone.

The Gestapo are here to claim the children. By placing the child actors with the rest of the cast, they are pulled into the heart of the adult world, and the juxtaposition is made crystal clear. This is a real-world scenario. The children here are not sheltered; neither are the adults flawless. They are made acutely aware of the system and where they rank in it, a fact that is very poignantly raised when Jonathan remarks on how little they are liked or wanted (referring to the treatment meted out to migrants). Jonathan (Tony Garcia), Hector (Isaac Ordonez) and Beto (Cael Peter Cross) silently witness the immigration officers tearing families apart, handcuffing them, even as they vouch for their love for the new homeland. The trio, having become immune to the routine by now (the indifference and buried frustration brilliantly enacted), have advanced to returning the favour.

The kids are lovely, charming and easy-going. The chemistry between them, believable and natural. The credit for this goes to the writing (Marina Kato Hoag) that picked on the nuances and incorporated them in the dialogue to make the bonding between them convincing. Of course, the acting is remarkable, considering how this is not just a children’s tale and involves adults too. When an innocent prank from the kids results in a quick hide-out and the discovery of Esme (Camila Olivera), whose family is awaiting her at the beach, the story sets into motion. The problem now is to get her reunited with her family undetected by the Gestapo.

As the rest of the story focuses on Esme’s clandestine journey, aided by the trio who, in fact, take Big Serg’s (Hector Atreyu Ruiz) help, we are reminded of all the scrupulous ways we have followed in the past to bail a friend out. Except that in Dall’Stella’s world, the help is going to offer something wondrous in return.

Dia De Las Carpas is a treat to the eyes, thanks to cinematographer Bethany Michalski’s vision, which takes the viewer into a journey unparalleled, and which, along with composer Carlos Felipe Silva’s breezy score, makes the world of Dia De Las Carpas come alive. But it is in the skilled editing of the film that it truly earns its superlatives. Yufei Skylar Zhang’s editing allows each frame to work on its audience is commendable, to say the least. In offering clean cuts to maintain the pace and timely cuts where necessary to prolong the time frame, Skylar Zhang has effectively shown how the editing of a film can either make or break it. (Watch out for the shots as the trio escort Esme in Big Serg’s vehicle. The timeline offers an insight into the precision with which Skylar Zhang operates to maintain the continuity and pace of the shot.)

As the kids reach the beach, the Gestapo in tow, little do they know where the missing family of Esme is. With time running out and hope wearing thin, much like the ending of the famed fairytales, it all becomes not only right, but magically so.

Dall’Stella’s Dia De Las Carpas has a lesson for all. In garbing it under a children’s magical adventure, while presenting it in very contemporary times, he makes the short engaging and unforgettable.

Without giving away any spoilers, little Esme (Olivera is absolutely charming and adorable) leaves us and the trio with the promise of a lasting friendship. So long then, amigos, until we meet again, hopefully in a feature-length!