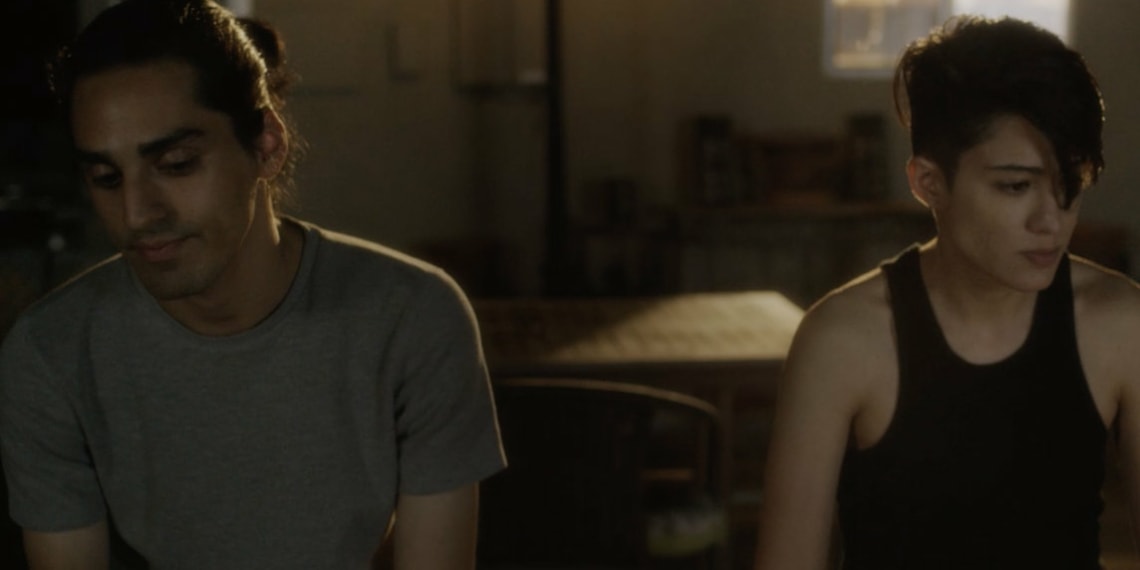 Matt Macedo’s examination of how the effect of absent parents shaped two siblings in Our Oceans rings true to life, especially against the backdrop of loss of a parental figure. Over the course of eleven minutes, Macedo unfurls the tensions between brothers Chris and Sean, intercut with memories of a day at the beach, a motherly figure looking over them.

The film opens with this warm, dusky memory, cutting away to the present day. It’s Loretta’s (the woman who effectively brought up the brothers, played by Carol Woodle) funeral. Chris (Sami Lee Robbins) and Sean (Andrik Ochoa) sit in separate aisles, and while Chris gives her an eulogy, Sean is little more than a shadow presence.

Following the two brothers through Sean’s brief visit, the film finds them finally confronting each other — not that Chris has shied away from it before then. What gives it power is the fledgeling reconnection it spirals from. Ochoa and Robbins both struggle to be authentic, but are greatly supported in their individual performances through their mutual chemistry. It is not hard to believe that years of resentment and bitterness lie beneath each of Chris’s barbed remarks and hostility, neither is Sean’s anguish difficult to understand.

The film cuts back to the beach memory a few times throughout the story, and though it gets a little monotonous, the nostalgia and melancholy nature of it emphasises the brothers’ inability to accept the events afterwards, or the present. Ochoa’s graceful appearance fits Sean well, going so far as to tease his past and add to the mystery and tension of the brothers’ broken relationship.

The film does not lay blame on either brother, instead, it is more interested in the effects of the estrangement. Through Our Oceans, Macedo demonstrates some of the loneliness of going it alone, and the suppressed pain and bitterness in all parties involved.

#ShortFilmReview: Our Oceans: There were oceans between them, of affection and resentment. Click To Tweet
Watch Our Oceans On Amazon Prime