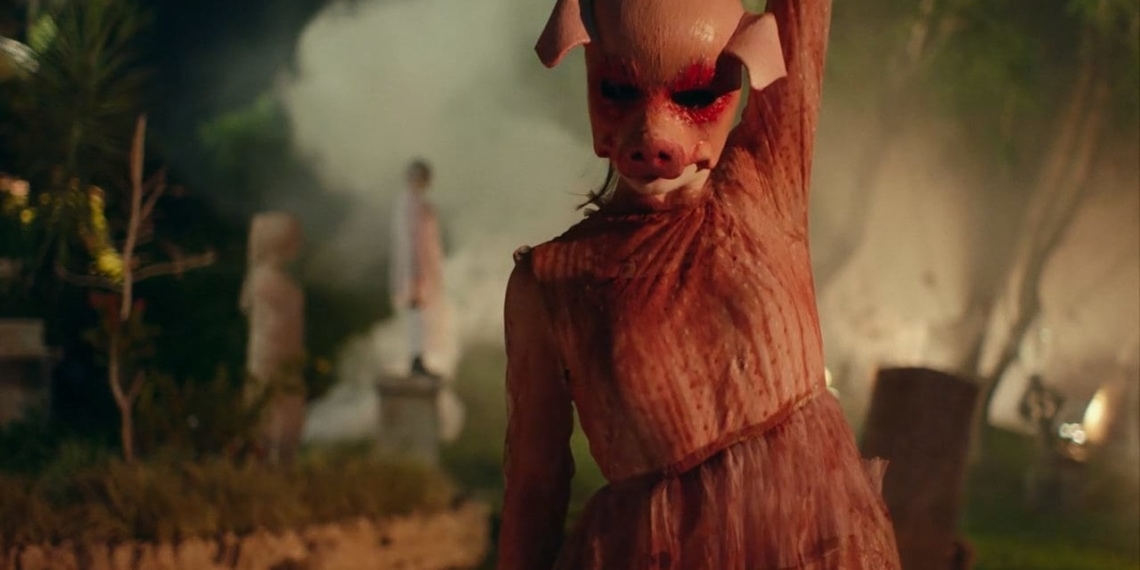 There’s no mistaking Nikki Born’s Haunt as anything but a comedy. But beyond its witty one-liners, commendable cast and well-timed dialogues, Haunt manages to offer poetic justice to an issue that’s prevalent in the workforce and in presenting it with such gusto what Born deserves (besides just fans) is a real pat on her shoulder.

Nora (Carly Stewart) is working at Dollar King and it couldn’t get any worse for her.  Surprise, surprise, it does. A customer robs her off at the till; and that’s just the start! For it’s Halloween and the world is hell-bent on testing Nora’s patience with hideous costumes and senseless gimmicks. We get it, Nora isn’t up for this and neither are we. Trick or treat has played enough on us to have any novelty left. But her hatred for the festivities, made evident right from the opening frame, is about to snowball into something profoundly disastrous — except, she invites us in to join the ride!

The writing of Haunt ensures the pull between the audience, Nora, and the events to stay taut throughout. As Nora is misled to believe that her employer Dan (Mathew Herman) is to be sympathetic to her this Halloween, her eventual disappointment is palpable. And when the only option he leaves her with, besides coughing up the money, is offering herself, her outrage is shared. We want Dan’s blood too. It’s this sense of rooting for the character that is almost rare, especially without reducing the character to a gullible, naïve victim; Nora is neither naive and certainly not gullible. Our feisty little friend soon finds an equally eccentric, if not as fierce comrade — enter Marie (Melanie Glickman).

For a film of just 13:19 minutes, Haunt is remarkably plucky to have an ensemble cast, and that too, most dressed for Halloween. And it’s a risk that pays off. When Nora lands up at the one-time job that Marie recommends her, it’s her worst nightmare played out. And if you thought there could be nothing worse, Born certainly has a few tricks up her sleeve to surprise you!

A film of this stature wouldn’t have succeeded without its near-perfect cast and crew. Stewart as Nora is simply adorable. Her tiny frame eggs the audience to join along as it breaks into a million expressions ranging from anger, disappointment, and back to fuming rage. Herman, who plays the pervert boss, is so convincing that when he shows up at Nora’s can’t-stand-this-anymore day, we are in no mood to forgive him either. It’s imperative to note that whether it is Marie, Dan, or even the Slider Dude (Alexander Crow)—they aren’t just an addition to the cast, but a meaningful addition to the story and Nora. And it’s to the credit of Born that the characters are well balanced in both screen time and story’s relevance.

Stefan Smith, whose composition sticks with the script like glue, is simply spot on. The leitmotifs used stays with us long after the credits begin to roll. It would be unfair to not mention the make-up (Bree AnnMarie), costume designer (Lee Diemer) and production designer (Krista Thomas-Scott) without whom this Halloween would have simply been a disappointment. The believability of the setting stems from not only their expertise but also the cinematographer’s (Ryan Jackson-Healy) deft handling of the camera. Be it the aisles of the Dollar King, or the ghostly interiors of the Halloween-themed park, or the unmissable climax, his camera offers life, faint horror and ample amusement to all that’s projected on to the screen.

Born’s Haunt is one of those rare comedy shorts that picks on a theme that has been overly exposed, spins it around to offer something unexpected, and leaves the audience feeling that rare sense of poetic justice seldom felt in a 13-minute short.

52 - A Tale of Loneliness: Sorrows of Sound